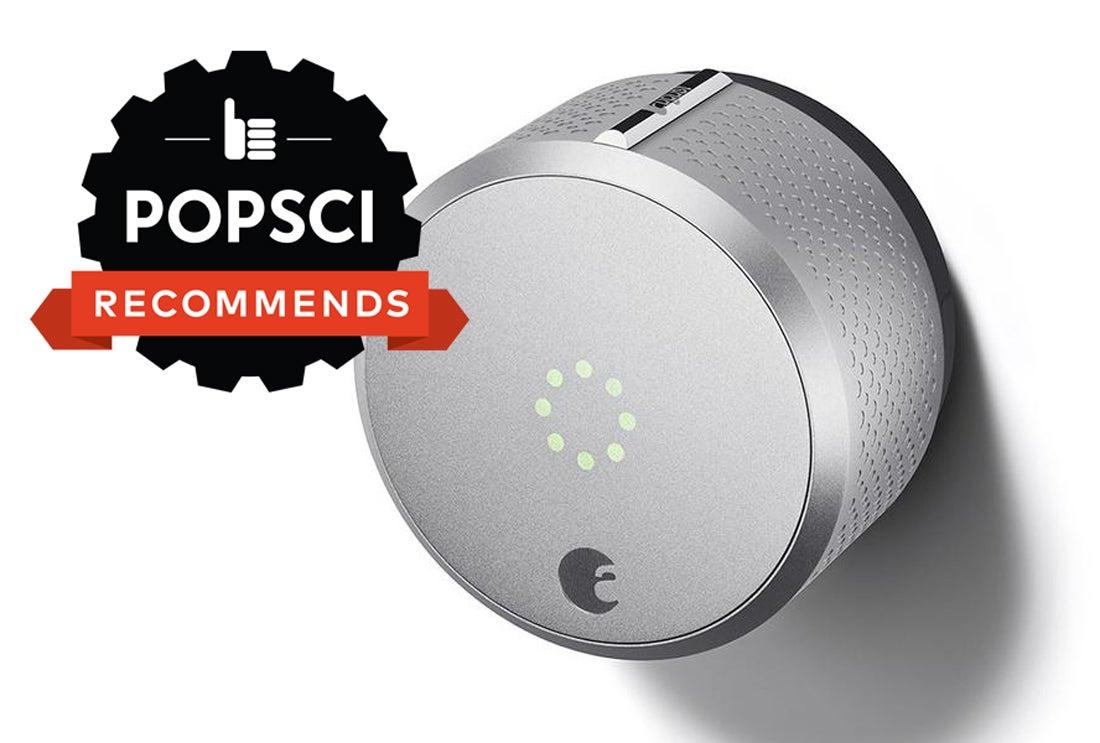 The latest version of the August Smart Lock adds Apple HomeKit support and several design refinements, but its main selling point remains the same: the ability to convert your existing deadbolt into a smart lock without having to replace the entire thing.

Unlike other smart locks, the August doesn’t require the removal and replacement of your door’s entire locking mechanism, so it’s simpler to install and doesn’t produce annoyances like mismatched hardware aesthetics or a need for new keys. The setup process is fast and easy, even for those who’ve never seen the inside of a door lock. It took us a little over 10 minutes.

The August comes with three mounting plates and three color-coded deadbolt adapters (note: the most recent models are shipping with a single universal mounting plate), which makes selecting the kit that fits your current deadbolt a cinch. According to the company, most deadbolt locks are compatible with at least one of these, but be sure to check the exceptions before you buy. There’s not much you need to install the lock, either. Just a standard Phillips screwdriver, which you’ll use to remove the two long screws that hold the thumb-turn mechanism in place on your current lock. After that, it’s a matter of attaching the right mounting plate, securing the compatible deadbolt adapter, and then locking your new August lock in place with its wing clamps.

Before you can use the lock you need to download the August app, setup an account, install four AA batteries, and update its firmware. We tested the lock with two companion devices: the August Connect and the August Smart Keypad, both of which cost $79 each. The latter lets you create specific entry codes for guests or neighbors and mounts to the outside of your house. The former serves as a plug-in Wi-Fi bridge for the Smart Lock (which is Bluetooth only) and gives you the ability to remotely lock or unlock your door as well as get instant alerts on your smartphone when anyone else enters or exits your home. Without the Connect you need to be within 10 or 15 feet of the lock to issue commands.

No lock is perfect, but we were more than a little skeptical of the August Smart Lock for a few reasons. First, regular house keys have served us pretty well over the years. Yes, you have to physically remove them from your pocket or purse and insert one into a door to unlock it, but is that really such an inconvenience? Then there’s the cost. These days, most smart locks hover around the $200 mark, which is a lot of money to spend for something that seems marginally useful at best. Finally, people seem to be getting better and better at hacking many of these locks, which doesn’t inspire a lot of confidence for those thinking about upgrading.

After living with the August Smart Lock for close to two months, these reservations faded away completely. In addition to being easy to install and use, the lock is practical in ways we weren’t expecting. Quick grocery runs, actual runs, coffee shop trips, dog walks—it was great not having to tote a big jangly mess of keys with us on short excursions around the neighborhood.

Also nice? Being able to grant neighbors and friends access to our home without giving them an actual physical key. People who actively rent out their homes may derive even more benefit here, but we found the August Smart lock and keypad came in handy during a few common scenarios. Some very thirsty plants got watered during an impromptu weekend getaway trip because we could give our neighbors a virtual key. Similarly, when an unannounced family member showed up while we were out running errands, we simply unlocked the door remotely from the grocery store.

Throughout it all, the lock was rock-solid reliable, too. While we’ve heard stories about some smart locks mysteriously unlocking themselves at random times, our experience with the August was 100 percent smooth. We played around with the geofencing feature that locks and unlocks your door based on your phone’s location without any mishaps or weird behavior. There were never any discrepancies between what the app reported and the actual state of the lock, either.

While it doesn’t work with Samsung’s SmartThings platforms, the August Smart Lock is compatible with pretty much everything else. It has its own IFTTT channel, and you can shout locking and unlocking commands at Siri, Alexa, or Google’s Assistant if that’s your thing.

Not everything about the August lock is perfect. Adding the Connect Wi-Fi bridge and pairing it with the lock was a bit of a hassle. Based on our experience, the plug-in unit needs to be very close to the smart lock (about 5 feet) and not separated by walls and other obstructions. We understand it needs to be in Bluetooth range, but 5-6 feet seems a little ridiculous. If you’re interested in adding the Connect, do yourself and favor and assess the outlet situation around the door you plan to install the August lock on.

Other little gripes? It would also be nice if you could have more granular control of over the auto unlock/lock geofencing feature. While you can adjust the distance down to 100 meters using the August app, we’d be more comfortable if that perimeter were even smaller. Still, we’ve yet to have a worrisome experience with the August Smart Lock and given our newfound appreciation for smartphone based security, you can count us among the smart lock converts.

The August Smart Lock is a pricey but legitimately useful option for anyone wanting to add some smarts and even an extra level flexible security to the locks in their home. It’s easy to install, well designed, and most importantly, it’s just as reliable as a regular deadbolt.