Give your Chrome OS interface an instant upgrade

Google's Chrome OS software is in a constant state of evolution. And for the tinkering-lovin' tech nerds among us, that means there's always an opportunity to find and embrace something new — often long before it's officially released and available to the masses.

Well, gang, we've got quite the tasty treat to tinker with today. It's a massive update Google's been cookin' up for its Chromebook app launcher for a while now, and it'll bring a significant change not only to how your device looks but also to what it's like to use.

The new Chrome OS launcher design has actually been under development since this summer. Thus far, though, the work has mostly been taking place in the higher-tier, less stable Chrome OS channels, where regular Chromebook-ownin' folk rarely dare venture.

But no more: The revamped and spruced up Chromebook app setup is now available in the regular Chrome OS stable channel — and while you still have to do ateensy bit of digging to uncover it, it's not at all difficult to manage.

So strap on your dorkiest-looking spelunkin' hat and get ready to meet the Chromebook interface of the future — available for you to experience this very minute, if you know where to look.

[Get fresh Googley tips in your inbox every week with myAndroid Intelligence newsletter. Three things to know and three things to try every Friday!]

All right — enough buildup already. Here it is: the new Chrome OS Productivity Launcher, as this fancy new interface is currently known within Google.

Look familiar? If you've been living the Chromebook life for long, it should: In a rather hilarious twist, the newly sized-down Chrome OS app launcher is actually a lot like theoriginal Chrome OS launcher setup from years ago. Yes, indeedly, it's Yet Another Google 360™. Flip, flop, flippidy flop.

What's more, the new Chromebook Productivity Launcher is undeniably similar in basic structure to the Windows 10 Start menu setup — though ironically enough, if Google was on any level aiming for familiarity in another bid to win over Windows-reliant business holdouts, Microsoft is now movingaway from that design as of its Windows 11 update.

But you know what? All amusing indecision and belated emulation aside, using the new Chrome OS launcher interface really does feel like a practical improvement within the context of the Chromebook environment. The full-screen app drawer arrangement Chromebooks have used for years now certainly makes sense on Android, where most of us work with a phone-sized screen. In that arena, seeing all your apps together in that full-screen view is the most efficient way to browse and find what you need.

On a Chromebook, though, the larger nature of the display makes that full-screen interface a little less optimal. Visually, it requires you to scan a large area to track down the item you're seeking. And the separate page setup means you often have to scroll somewhat awkwardly from one page to the next to browse through the available options — an effect made even worse by the traditional Chrome OS launcher's pesky habit of leaving lots of blank space in the app grid and failing to offer any easy way to auto-arrange your icons and bring 'em together. 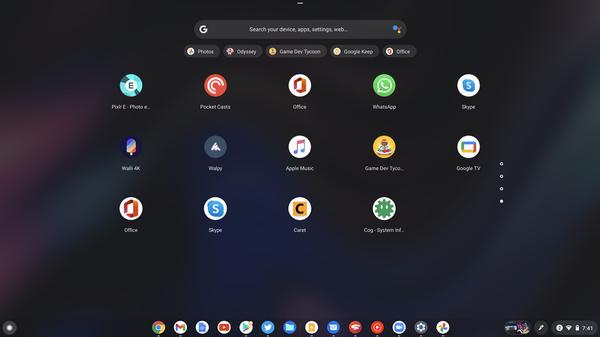 In the updated Chrome OS Productivity Launcher, everything's right there — collected together and presented in a window that takes up only a fraction of your screen. You can scroll through your list of apps continuously, without any focus-breaking pagination, and when you drag and drop an app to a new position, your Chromebook automatically rearranges everything else to fill the space. Hallelujah!

The new Chrome OS launcher lives up to the promise of Google's recently rebranded Everything Button, too. That, in case you can't keep up with the merry-go-round of never-ending Google name changes, is the button formerly known as the Search key or the Launcher key — y'know, the one that goes where Caps Lock would live on a more traditional computer.

True to the name, the Everything Button really does let you do just about everything on your Chromebook within this new launcher setup. In addition to showing you all of your installed apps, it opens up a prompt into which you can type whatever's on your mind to search for apps, look through your local device storage, find a Chrome OS setting, track down a Google Doc or other Drive file, search the web, and even interact with Assistant (!). And as you type, the list of suggested results gets more and more refined with every new letter.

Not too shabby, right? So let's get you ready to try this beauty out for yourself — a flick of a couple quick switches that couldn't be much easier.

No exaggeration: Switching yourself over to the new Chrome OS Productivity Launcher will take you all of 20 seconds to do. There's no real risk involved, and if you decide you don't like it, it'll take you another 20 seconds to switch back (for now, at least — odds are, Google will release this to everyone and make it the default Chromebook setup atsomepoint in the not-too-distant future).

Here's all you've gotta do:

Within a couple of seconds, your Chromebook will restart — and once it does, you can simply click the circle-shaped icon in its lower-right corner or hit that aforementioned Everything Button to explore your snazzy new info-seeking setup.

Just note that the setupisstill a work in progress, so you're bound to run into the occasional imperfection at this point. It's also optimized mostly for the desktop side of things at the moment, so if you're using your Chromebook in its tablet state, don't expect to see anything earth-shattering just yet.

The new launcher is available in the stable channel of Chrome OS 94, which should be on the vast majority of current Chromebooks right now, as well as on the newer and still-actively-rolling-out Chrome OS 96 update (which, confusingly, is the release that's coming immediately after Chrome OS 94 — it's a long story).

The experience is a bit more polished on the latter side, not surprisingly, but it's still quite usable and stable even on that earlier version — with the only major quirk I've run into being some glitchiness with proper app folder functionality.

Oh, and as for the lighter motif you might've noticed in the launcher and shelf areas in my screenshots? That's another hidden Chrome OS flag you can activate, if you're so inspired. (Consider it a bonus for reading this far down in the story!) Just head back into that same flags area from a minute ago and search fordark/light to find it.

Combined together, these updated elements will give you a refreshingly light and streamlined new Chrome OS experience with plenty of practical advantages. It's a lovely little upgrade, all in all — and best of all, it's one you can grant yourself without spending a single dime or exerting even an ounce of unnecessary energy.

Want even more Googley knowledge? Sign up for my Android Intelligence newsletter to get next-level tips and insight delivered directly to your inbox every Friday.