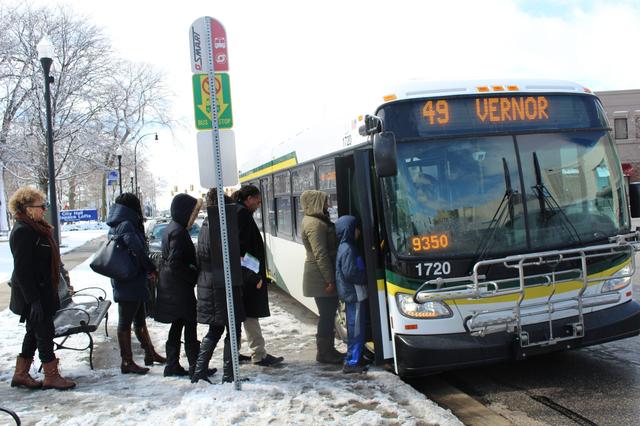 A handful of people with the nonprofit Congress of Communities was standing on Vernor Highway in southwest Detroit. They were waiting to take the No. 49 bus, not to go anywhere in particular but to get more comfortable with public transit.

This group of organizers signed up for an outing with the Detroit Department of Transportation to learn how to ride the bus and then go back to train their members.

Congress of Communities Executive Director Maria Salinas said the group’s clients could benefit from knowing how to use public transit.

“Right now car insurance is ridiculous. People are just finding themselves struggling,” she said. “A lot of undocumented don’t have licenses.”

The bus, she said, could give them an alternative way to get around.

Just a few minutes after its scheduled time, the No. 49 bus arrived. The Congress of Communities members walked on with a few DDOT staffers. They had the vehicle to themselves, even though the bus was open to the public and servicing its scheduled route.

Salinas, not a regular bus commuter, surveyed her surroundings.

“It feels very comfortable. Smells clean. The seats aren’t torn.” It reminded her of an airport shuttle, she said. “I didn’t think the city had something as clean or as put-together. That was my perception. I’m very impressed.”

DDOT Service Development Community Liaison Mikki Taylor-Hendrix, riding along with the group, stood up and began going over some of the bus’s features.

“As you can see there’s a camera here,” she said, gesturing toward a security camera. “There’s one towards the front, there’s one in the back, and there’s a couple toward the exterior as well.”

The city, according to Taylor-Hendrix, has actually used footage from a passing bus to help solve crimes.

In addition to the cameras, Detroit has transit police officers. There are about 60 officers assigned to buses, the People Mover and the Rosa Parks Transit Center.

“If you see them getting on the bus it’s just to provide safety and security for the passengers,” said their chief, Ricky Brown, who rode with this group.

But incidents do still happen on the bus.

“We are a major city. Crime exists everywhere, and that’s not an excuse that’s just a reality that we want people to understand,” said Taylor-Hendrix.

Another issue sometimes is bodily fluids. Which is why, she said, there’s protocol in place when vomit, urine or other fluids from humans end up inside a bus.

“Let’s say there’s an incident,” said Taylor-Hendrix, “someone’s sick and they might vomit on the bus.” The bus would go directly into the terminal to be cleaned and a substitute bus would take over the route.

As for the No. 49 route, its schedule runs for 21 hours a day between southwest Detroit and Dearborn. It isn’t the only DDOT bus to cross into the inner-ring suburb, the No. 37 Michigan line runs to Fairlane Mall, and the No. 41 Schaefer route stops at the Ford Rouge Plant in Dearborn and goes on to the City of River Rouge. The No. 49 Vernor goes until it reaches the Arab American National Museum in east Dearborn.

When the training group made it to this destination, riders got off the bus and waited for one headed in the other direction.

While standing on the sidewalk, Taylor-Hendrix said she’s done at least 20 trainings like this. And she’s heard a lot of misconceptions about who buses are supposed to serve. 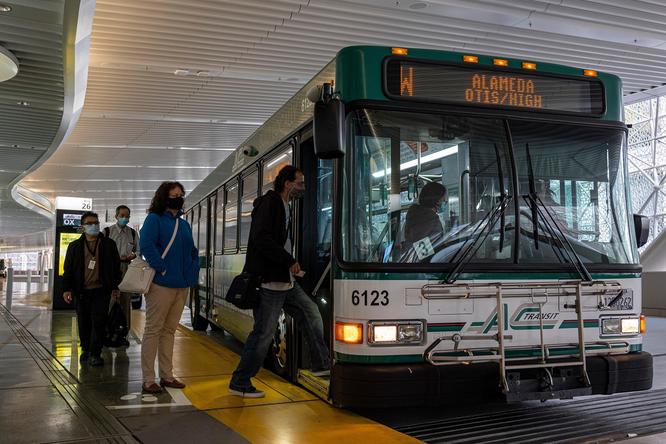 “I think the biggest ones I come across are just ‘I have a car, so I don’t need public transit’ or just ‘I’m not a minority, I’m not poor, so it’s not for me,'” she said.

To make matters worse, she said DDOT doesn’t have the best reputation.

“I think for a long time we’ve been not that personable. Obviously, we have a legacy of not doing great and we’re definitely making those improvements,” said Taylor-Hendrix.

But even while they make improvements like adding security cameras, extending service hours, and connecting riders to more destinations, Taylor-Hendrix said ridership has not increased. The service gives an average of about 400,000 rides per week, according to DDOT.

It became time for the Congress of Communities group to board the eastbound No. 49 bus and head back to Southwest Detroit.

On the way back, they were picked up by a new vehicle, featuring a big back window that the older buses don’t have. As it moved forward, riders onboard could look out and see the road traveled behind them.

Never ridden the bus in Detroit before? WDET answers your potential questions.

Where does DDOT go?

The bus service covers Detroit, and according to the DDOT website, 20 surrounding areas, though that number will likely decrease once the RefleX service is replaced by SMART’s new FAST service.

How do I find my route?

If you need to take a bus, the trip planner on the DDOT website is one way to go. Other online options are Google maps, which has a transit section, and the Transit App on both Apple and Android. DDOT also has their bus schedules posted online here, or paper schedules are available at DDOT transit centers around the city.

Where do I go to catch the bus?

After determining the right bus to take, find the bus stop where you will be departing. Bus stops should be marked with signs. The bus numbers will be displayed on the front of the bus.

How much does it cost?

The cost for a one-way trip is $1.50 and $0.25 for a transfer.Discounts are available for seniors and children shorter than the farebox are free. More discounts are posted on the DDOT website.

Monthly ($47.00), bi-weekly ($27.50), weekly ($14.40) and five day ($14.00) passes are available for purchase online or at DDOT stations around the city. Although there is not yet a pass that can be used for all public transit systems in the region, a single pass can be bought for use on both DDOT and SMART buses with hopes of more flexible options in the future.

DDOT services must be paid on the bus. Enter the bus through the front doors, the farebox is located right as you walk in. Cash, change or passes can be put into the farebox.

If your route includes a transfer to another bus, you must ask the driver for a transfer ticket when you board the first bus of your journey. Transfers cost an additional $0.25, but discounts apply. A transfer to the QLine is available for purchase on DDOT buses.

Can I take my bike on the bus?

Bike racks are available on the front of the bus, for free, for those who want to ride their bike to the bus stop.

How do I know when to get off the bus?

Some buses announce the upcoming major stops and transfer destinations. In most cases, the Transit App and Google Maps will notify you when your stop is coming up. If you need more assistance, ask your driver for help. When your stop is next, pull the cord under the window to signal the driver that you will be getting off.