Read It and Weep: Here's How Bad Nvidia GPU Prices Got in a Single Year 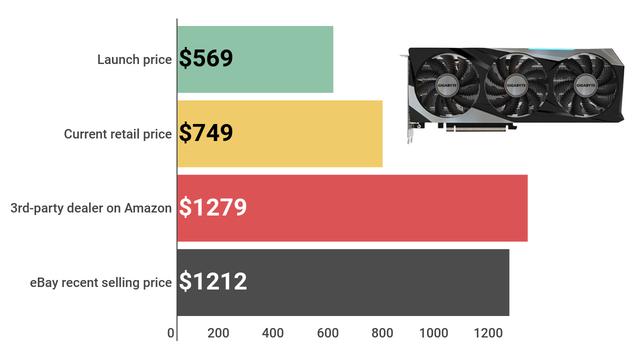 If you somehow bought an Nvidia graphics card a year ago, consider yourself lucky. Since then, the market for desktop GPUs has become a depressing mess. Supplies remain thin, scalping is rampant, and price inflation is upon us.

Case in point: 12 months ago, I scored a Gigabyte RTX 3070 card from Best Buy that cost me $569. Now that same card is listed at $749 due to rising costs and Trump-era tariffs on China kicking back into effect earlier this year.

But good luck finding the card for even that price. PC graphics cards continue to sell out in minutes, making it incredibly hard to buy one at normal retail value. To obtain the Gigabyte RTX 3070 immediately, you’ll have to try eBay, a third-party dealer, Amazon, or Newegg, where it can cost an eye-popping $1,200 or more.

To put things in perspective, we decided to chart out the price increases for various Nvidia RTX 3000 graphics cards from GPU vendors such as Asus, EVGA, Gigabyte, and MSI. To do so, we looked at the initial launch price at either Best Buy or Newegg by using tools such as the Internet Archive, PCPartPicker, and news articles from a year ago.

We then looked up the current retail pricing, and compared it to the costs consumers can find on third-party dealers at Amazon and Newegg. Finally, we included the recent average selling price for each card on eBay using the site’s Terapeak tool. The results are below—try not to cry. 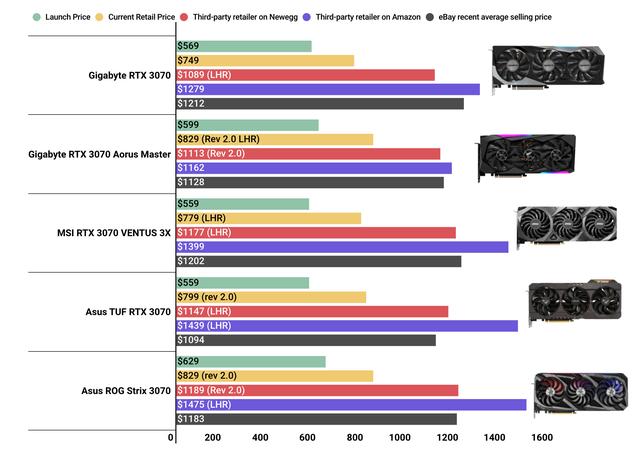 Remember when the RTX 3070 was announced with a $499 starting price? Those days are long gone, unless you can snag a Founders Edition model.

As you can see, it's best to avoid buying the cards from third-party dealers on Amazon, where prices are worse than those charged by scalpers on eBay, although pricing can quickly fluctuate. (Where it's noted, the terms "Rev 2.0" and "LHR" mean the product listing indicated that the card contains Nvidia's Ethereum hash rate limiter.)

Prices go up again for the more powerful RTX 3080 card, which initially arrived closer to $699.

Sadly, the midrange $399-and-up RTX 3060 Ti now costs closer to a high-end graphics card if you buy from a scalper or third-party dealer.

The one exception to the inflation has been the Nvidia-branded Founders Edition models sold through Best Buy. Pricing for these limited-editions cards has remained the same through the past year. But to buy one, consumers have often had to wait hours in line or even camp out.

Nvidia's RTX 3060, RTX 3070 Ti, and RTX 3080 Ti graphics cards were not included because they launched earlier this year.