Schlage Encode Plus Smart Lock Eliminates The Need For Passcodes 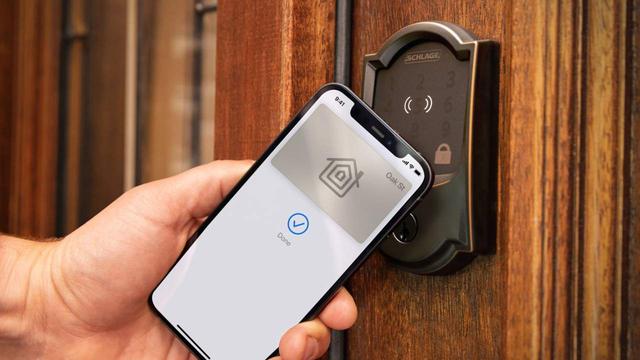 Often, when new technology is released, you don't realize what a change the tech can make in your life until you try it. For many people who have adopted modern deadbolts and doorknobs that operate using passcodes instead of keys, locks of the type certainly fall into that category. Many manufacturers offer keypad deadbolts and doorknobs, allowing you to type in a custom code to lock and unlock the door.

Eliminating the need for keys makes it much easier to access your home and to give friends, family, or workers access to your home without having to hide a key or make your way home to let them in. One of the more common brands of smart locks on the market today is Schlage, a company that's been making doorknobs and deadbolts for many years. Schlage has a new smart lock called the Encode Plus that adds some new features bringing convenience to the next level.

The major difference between the Encode Plus smart lock and existing locks currently available from Schlage is the integration of Apple Home Keys. Utilizing Apple technology, Schlage has enabled iPhone and Apple Watch users to lock and unlock the door without typing a code into the lock.

Schlage offers the Encode Plus in several colors, including aged bronze, satin nickel, and matte black. The colors and styles available mean that there will be no need to replace a doorknob to find a matching color or style for the vast majority of homeowners. Being able to replace your deadbolt alone means for most people installing the lock is as easy as removing the original deadbolt and placing the Encode Plus in the existing opening.

Encode Plus still has a numerical keypad on its face allowing you to assign PINs to different people who need access to your home. The big change here is the addition of Apple Home Keys. With that technology integrated, an iPhone user can lock and unlock the door by simply holding the iPhone near the lock.

The most interesting capability of Home Keys comes for those who have an Apple Watch. For Apple Watch users, there's no need to dig your iPhone out of a pocket or purse, you simply hold the Apple Watch near the lock, and the deadbolt opens or closes. The lock is also Wi-Fi enabled, allowing you to unlock it via an app from anywhere you have an Internet connection. Naturally, that feature assumes your home Wi-Fi connection is working.

While Schlage hasn't outlined any specific installation instructions for the Encode Plus smart lock, the installation process should be virtually identical to installing any of the brand's other keypad deadbolts. Having personally installed Schlage keypad locks on my current home and a rental home my wife and I own, the difficulty of installation will vary depending on a couple of factors.

My current home was built in 2019, and the installation process was as easy as unscrewing the existing deadbolt and removing its components from the door. The Schlage keypad deadbolt was an exact fit for the existing openings the builder drilled into the face of the door and the edge where the deadbolt itself opens and closes. However, in my instance, the opening in the door frame for the original deadbolt was smaller than the Schlage deadbolt required.

While you might think that was a big problem, it was an easy fix using a drill, an appropriately sized hole saw, and a sharp chisel in about five minutes. While the Encode Plus is Wi-Fi enabled, the Schlage lock I installed was not. Presumably, linking the Encode Plus to your Wi-Fi will be accomplished utilizing an app on your smartphone and should be as easy as putting any device on your home Wi-Fi connection.

Installing a Schlage lock on an older home could present more of a challenge. Our short-term rental home is over 120 years old, and while it had an existing deadbolt on its original solid wood door, the deadbolt hole was too small for the Schlage keypad deadbolt. However, all that was required to complete the installation was a drill and hole saw. The installation process for Schlage's key padlocks is straightforward and will present no problems to most homeowners.

If you own a short-term rental property, a keypad lock that is Wi-Fi enabled eliminates the need to leave a key somewhere for your tenant to find. It also allows you to unlock the door without going anywhere if the tenant loses a key or forgets the PIN. You can also quickly delete a code when the tenant checks out, preventing them from accessing the property in the future.

Schlage has officially announced the Encode Plus lock today, and unfortunately, as of writing, it hasn't confirmed the MSRP for the lock. Exact availability is also a mystery for now, but we would assume it will be available very soon. As for what we would expect to see for pricing, based on pricing for its existing keypad locks, the Encode Plus will likely sell for somewhere between $250 and $350.