5 min refresher on Rafizi Ramli’s political career, for your next mamak sembang politik

In recent news,Rafizi Ramli has risen from the grave.

“Honey I rose up from the dead I do it all the tiiime” Original imgs from Indian Express and Borneo Post.

Well, less like a real grave, but more of a political one, really. After a long hiatus, Rafizi Ramli realized that BN obliterated PKR in Johor because they didn’t know how to act, so although he didn’t really want to, the insistence of his supporters made him decide toreturn to politics. And he’sshooting for thesecond place in the party.

“On that realization, I have decided to return to the political arena by confirming that I will be in the running for KEADILAN’s Vice President post in the next election.” –Rafizi Ramli, translated from his site.

The last time Rafizi was active in politics had been three years ago, so just as one would watch last season’s finale before binging on the new season of drama, here are some notable things about Rafizi Ramli, starting with the reason he quit…

He quit politics in 2019 to focus on his technology startup…

A picture of Rafizi Ramli. Img from Vulcan Post.

…but that might not be the only reason. At the end of 2019, Rafizi made it clear that he was quitting politics through a Tweet.

“It’s obvious I tweeted because I am making it clearI am not coming back to politics. It’s the stage of my life when I need to learn. Only through learning we can be better & contribute better,” –Rafizi Ramli, from a 2019 Tweet.

While he said the reason he quit was tofocus on his start-up, which involves AI, machine learning, and the Internet of Things, quite a few people were convinced that there’s another reason behind it. Inside sources told ofconflicts within the party, where he was the target of attacks by Azmin’s camp – Rafizi lost to Azmin in the running for Vice President post the previous year – and him quitting was a way to de-escalate things.

Another possible reason for his resignation waslack of support from within PKR. The announcement to quit came a month after he was acquitted from his charge of revealing bank accounts related to the National Feedlot Corp scandal, andWong Chen, Subang MP as well as a close friend of Rafizi in PKR, had mentioned that not many had congratulated him in the PH Whatsapp group for it.

“Not turning up for his trial to support him is forgivable but (being)unwilling to type a simple message to congratulate Rafizi for his acquittal, for fear of upsetting powerful politicians, is a new low. I think a valid reason for his departure from politics is to rid himself of the company of ungrateful opportunists,” –Wong Chen, as quoted by FMT.

It’s so easy we spent like 2 minutes in MSPaint.

Wong Chen also mentioned the fact that despite the consequences of his whistleblowing work putting him out of commission in GE14 and draining him dry of resources, he wasnot recognized at all, not even appointed to be a senator while those who “contributed almost nothing” were made ministers. Bearing all that in mind, Wong Chen said that he did not try to dissuade Rafizi from retiring from politics then.

He’s known for being outspoken about shady stuff

Rafizi’s entry into the government was asMP for Pandan, having won the seat from BN in2013 by almost double the number of votes. However, he was only MP for a single term, as his eligibility to contest in 2018’s GE14 was brought into question. This was due to a pending 30-month jail sentence he faced that year, for leaking private banking details in his exposé of theNational Feedlot Corporation (NFC) scandal (aka the cows and condos scandal).

This arrest seems to be for the #KitaLawan rally though. Img from Says.

Within that year as well, he was also found guilty of exposing a page out of the controversial1MDB’s audit report, getting him two 18-month sentences in prison. If there’s something to learn from this character introduction, it’s that Rafizi was known for his whistleblowing, having brought attention to various scandals, like MARA’s Australian property scandal, and Tabung Haji’s financial irregulaties. And he got a lot of stitches for those snitches, in the form of lawsuits. 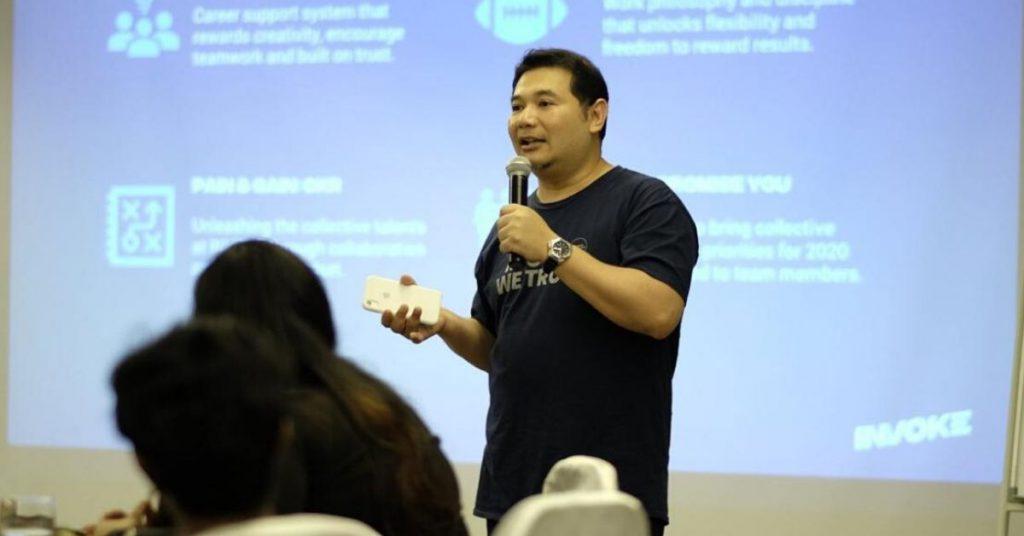 “Our work to combat corruption exposed us to a number of risks. It is common to be detained and investigated upon making a police report, so after a while I only make police report when it is absolutely necessary. There were times when I had to spend some nights in the lockup.The biggest risk, however, is the series of lawsuits against you. For every big expose we made, it is accompanied with at least one lawsuit. That explains why I have12 running criminal and civil cases at the moment.” –Rafizi Ramli, in a 2017 FB post.

12 running cases?! That’s enough for a whole other article, but some of the more interesting reasons he got sued for include:

Moving on to a less savory aspect of his greatest hits, though…

Can’t have all Rafizi’s pictures now can we? Original imgs from Wikipedia and CNet.

Prior to 2014, Rafizi Ramli was the strategy director for PKR, and one of his more infamous gambits during this time was something called theKajang Move. The goal of it was toreplace the Menteri Besar of Selangor at that time –Khalid Ibrahim – with PKR’s leader,Anwar Ibrahim. This was claimed to be a part of a bigger plan to win over Putrajaya.

“What PKR and Pakatan Selangor need is a fortification so that we can expedite reforms and simultaneously fend off political attacks and manoeuvres from Umno. We need as many of our top leaders around Selangor to defend Selangor because it remains the crown jewel of any political coalition in the country,” –Rafizi Ramli, as quoted by Malay Mail.

For those of you not familiar with the move, back then, PKR was part of the Pakatan Rakyat alliance along with DAP and PAS, and this alliance took Selangor from BN after the 2008 GE. Khalid Ibrahim, then a PKR member, was made Menteri Besar, and he was again elected to the position after the 2013 GE. And that’s when the Kajang Move started. Lee Chin Cheh, then Kajang assemblymen,resigned suddenly, paving the way for a by-election to take place.

Anwar Ibrahim was the confirmed to stand as a candidate to replace him, which would have put him in Selangor’s State Assembly if he won and enable him run for Menteri Besar. However, hegot convicted of sodomy before he can contest, so his wife, Wan Azizah, contested in his stead and won. Wan Azizah was unsurprisingly nominated as Menteri Besar, but Khalid, with backing from PAS,refused to resign.

Modern interpretation of the events. Gif from Looney Tunes.

A9-month political crisis ensued, the Selangor palace was angered, Rafizi exposed Khalid’s integrity cases, and eventually the crisis ended whenAzmin Ali became the next Menteri Besar, despite PKR’s reluctance. Khalid left PKR and became independent, Anwar got his datukship stripped off by the Selangor Sultan, and the move was condemned by PKR grassroots, PAS Youth, Selangor residents, netizens, and who knows who else. Overall, themove was seen as a failure, but Rafizi was made PKR’s secretary-general and one of their vice presidents after it ended.

There’s probably more about Rafizi Ramli than we can talk about in a short article written by a deadline-chasing writer hopped up on caffeine, but considering his track record and the recent announcement, one might wonder…

Will Rafizi’s return shake up our stale political scene?

Send this to 10 auntie whatsapp groups to spread the news! Original img from Sinar Harian.

The news of Rafizi returning to politics brought mixed reactions among the people. Some within PKR believe that Rafizi’s qualities and image will be a boon for the party, giving them a fighting chance in GE15, while others seem a bit bitter about him disappearing when the party needed him the most. But political analysts seem to be in his favor, stating that his chances of actually getting the deputy president post are pretty good.

“This is because Rafizi is seen as a strategist who can plan for a PKR election victory, hasexperience in political survey work, isforward-looking and is able toattract younger people to move with the party. But he must win the deputy presidency post first before even thinking of uniting PH,” –Awang Azman Pawi, of Universiti Malaya, to FMT.

In his statement, Rafizi acknowledged the problems facing the opposition – always defaulting to the ‘big tent’ approach, allying with rivals of UMNO/BN even when there’s no apparent results; and departing from issues that the rakyat can relate to, among other things. It’s nice to know that the awareness is there, but whether he can or will address these issues upon his return will remain to be seen.

NAH, BACA:OMG can Johor actually become its own country!?Related Items:

Your email address will not be published. Required fields are marked *