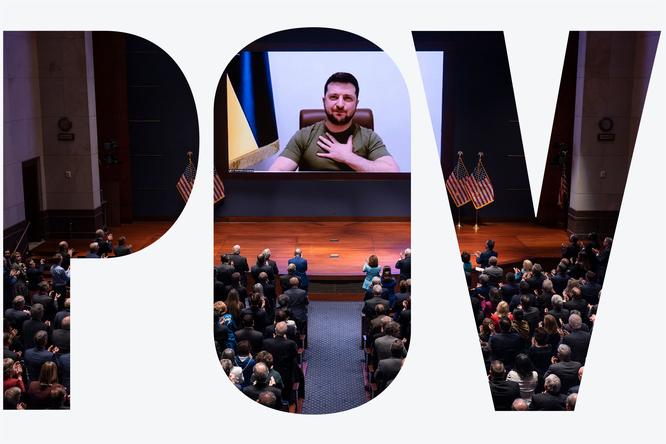 POV: Following Zelensky’s Address to Congress, Diplomacy Remains the Only Option in UkraineThe best way to proceed now is to build a peace step-by-step to reduce the risks of further escalation

With a powerful, and at moments, emotional statement, the Ukrainian president again confirmedthat he had a firm grasp on how to present his nation’s case to a foreign audience. Speaking to the British Parliament several days ago, he referenced Winston Churchill, Great Britain’s prime minister during World War II. In his address to the Americans, Zelensky compared Russian air raids and shelling of Ukrainian cities to Pearl Harbor and the September 11 terrorist attacks.

He referred to the monument to US presidents at Mount Rushmore and the “I Have a Dream” speech by Martin Luther King, Jr. (GRS’55, Hon.’59), saying that his dream is to have “a free and peaceful sky above Ukraine,” stating that Ukrainians are not fighting only for their freedom, but also “for the values of Europe and the world.” His plea for the United States and NATO to “close the sky” to Russian strikes was illustrated by graphic images of ruined Ukrainian cities, the suffering of ordinary citizens, and dead and injured children. 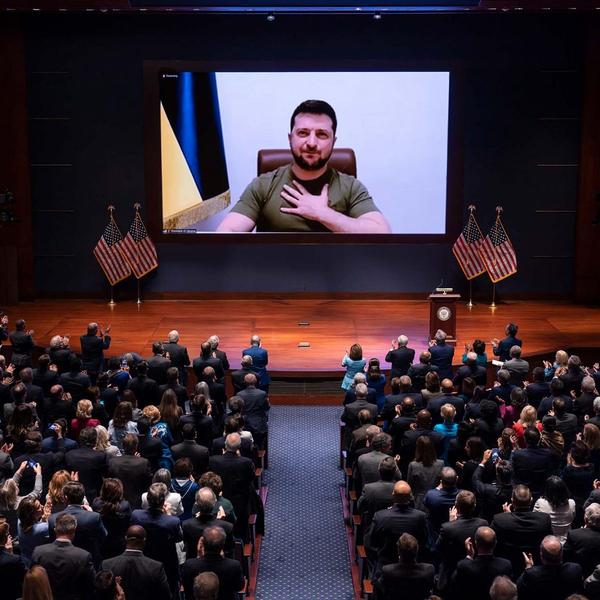 Indeed, Zelensky made it difficult for the United States and its allies to say no to his appeals. However, once the curtain has fallen, the question remains whether the United States can do more to help Ukraine, and if the answer is yes, what can it do?

Despite Texas Republican Congressman Michael McCaul’s appealing statement that “a lot of the members were in tears watching Zelensky’s address,” a number of factors determine the scope of the US involvement in the crisis. Most important, Ukraine is a NATO partner, but not a NATO member. The principle of collective defense as stipulated in Article 5 of the Washington [NATO] treaty doesn’t apply in this case, and therefore the Alliance is not obliged to directly intervene. It is hard to expect the United States or NATO to send troops into Ukraine.

In fact, Zelensky’s frequent calls for a no-fly zone over Ukraine has forced Washington to confront the so-called “escalation paradox.” Since the beginning of the invasion, Western assistance to Ukraine has resembled something akin to walking a tightrope. Washington and the European allies can’t stand still and look at the aggression without taking measures against Russia, but they have to do it carefully to avoid further escalation of the situation. A no-fly zone, for example, would lead to direct involvement in the war and confrontation with the Russians. They [no-fly zones] are designed to deny the use of airspace; it implies the engagement with aircraft that refuse to comply with them, in this case with Russian combat fighter jets.

Furthermore, President Biden is perceived as somebody who epitomizes a “noninterventionist instinct.” He opposed President Obama’s intervention in Libya as well as his surge of troops in Afghanistan. He resolutely defended his order to withdraw US forces from Afghanistan last year. And finally, he is very well aware of possible risks that direct military involvement in Ukraine would bear.

Addressing the US Congress, Zelensky, for the first time, acknowledged that a no-fly zone might be too much for “the US to stomach” and refocused on his request for jet fighters and more advanced air defense systems, as well as more powerful economic sanctions.

Against this backdrop, a mix of the rigorous sanctions and military aid seems to be the most realistic way ahead for Washington in the weeks to come. When it comes to military and humanitarian assistance, the United States has made several steps since the outbreak of the conflict: it released about $350 million in arms at the beginning of the conflict. Weapons shipments to Ukraine over the past year—three in total—come in at more than $1 billion. And President Biden is expected to announce another $800 million toward a fresh round of military aid in the coming days, including anti-tank missiles and anti-aircraft systems. The administration is planning to ramp up the sanctions against top Russian officials and those in President Vladimir Putin’s inner circle, according to multiple US officials. Last week, Congress approved a $13.6 billion package of humanitarian, security, and economic assistance, while the US Agency for International Development (USAID) has provided more than $100 million in humanitarian aid and critical relief supplies.

Since Moscow has thus far failed to stage a blitzkrieg attack in Ukraine, the longer war lasts, the more obvious the fissures in the Russian approach to training, equipping, and organizing become. The trajectory of the war, coupled with the growing civilian and military casualties, huge civilian suffering, and millions of refugees, tells us again that diplomacy remains the only option in Ukraine. The Russians’ difficulty in quickly fulfilling their objectives (if they’d ever set clear objectives), and the growing feeling that the operation is costly to maintain, may create a favorable environment for negotiation. It is unrealistic to suppose a comprehensive diplomatic solution will meet the interests of Kyiv and Moscow in the coming days or even weeks. The right to self-defense is guaranteed to Ukrainians by the UN Charter, and they have the right to do their utmost to protect the country.Therefore, a more realistic approach in this moment would be to build a peace step-by-step by reducing risks of further escalation. A ceasefire in Ukraine would be a milestone in a (long?) negotiating process that may guarantee a lasting peaceful solution for the country.

Vesko Garčević is a BU Frederick S. Pardee School of Global Studies professor of the practice of international relations and a former ambassador from Montenegro to Brussels (NATO) and Vienna (Organization for Security and Cooperation in Europe [OSCE]) and other international organizations. He can be reached atveskog@bu.edu.