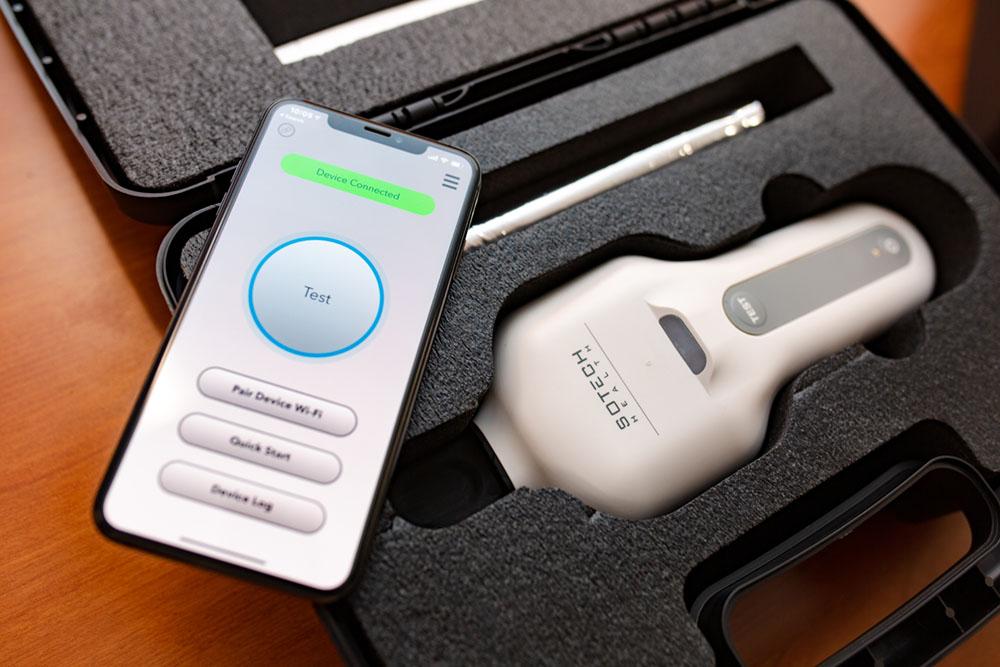 Coronavirus, a family member of single stranded RNA viruses consists with potent viral genome, covered by a bilayer lipidic envelope and a large number of peplomers or spikes on the surface, is currently considered the scariest health hazard worldwide with its potent ability to spread and infect human mankind never than before. There are many different variants of it, and most of their variants spread rapidly and cause infection at human respiratory tract, which ultimately leads to serious respiratory illness, resulting in extremely high morbidity and even death. The global COVID-19 pandemic is caused by the spread of severe acute respiratory syndrome coronavirus 2 (SARS CoV-2)1,2,3,4. Nearly 372 million people have tested positive worldwide and nearly 5.6 million people have lost their lives due to this deadly outbreak till February 2022. The virus spreads via airborne transmission, that is droplets, blood borne transmission and fecal–oral transmission5. One of the important factors regarding rapid spread of this disease includes its general symptoms being confused with common flu. Scientists at the Centers for Disease Control (CDC) and World Health Organizations have identified common symptoms of this disease including dry cough, headache, difficulty breathing, weakness, and lack of smell and taste. Moreover, it has been found in some extreme cases, dyspnea and/or hypoxemia can occur a week after the appearance of the disease, accompanied by septic shock, acute respiratory distress syndrome (ARDS), and dysfunction of coagulation6. These different modes exacerbated the rapid spread of the virus and made it highly difficult to control the spread. A person infected with the COVID-19 virus can display symptoms such as fever, cough, or shortness of breath that can be completely non-specific to one disease or can remain asymptomatic. Even during the incubation period of the virus, the person infected can still transmit the virus particles to others7. This pandemic shows no sign of ending due to the recent mutations of the novel coronavirus8. The only way to control the spread of this pandemic is via rapid diagnostic testing and tracing. The gold standard test for the diagnosis of COVID-19 is reverse transcription–polymerase chain reaction (RT-PCR) and quantitative RT-PCR (qRT-PCR). These tests, which involve viral detection, are highly sensitive as well as specific9,10. There are multiple occasions when RT-PCR also fails to quantify this disease due to several technical reasons, although patients show strong symptoms. Along with RT-PCR, chest X-ray, radiology and computed tomography (CT) is also currently considered one of the alternate gold standards for the detection of this novel coronavirus and in most cases such procedures have been opted if there is a confusion from RT-PCR11. However, these tests are time consuming, relatively expensive, require sophisticated instrumentation, and trained personnel9,10.

Current research shows that COVID-19 has been strongly associated with pulmonary deficits12. Key metabolic signals associated with tracking the pulmonary deficit are a combination of volatile organic compounds (VOCs) and inorganic gases. These VOCs and gases are found in parts per billion to parts per million levels in human exhaled breath. Exhaled breath can be used for non-invasive disease diagnosis, the term being used widely for such an approach is depicted as “breathomics”. VOCs from exhaled breath can arise from cellular in vivo metabolic activity. Respiratory diseases often alter metabolic pathways such as lipid peroxidation and upregulate the release of cytochrome P450 enzyme13. This altered metabolic pathway releases VOCs in the breath, which can be linked to specific respiratory pathways. Target analytes such as nitric oxide (NO) and methanol have also been found in human breath using resistance-based sensors. In a study, it was found that COVID-19 patients with thrombotic complications had higher NOX activation compared to event-free ones, independently upon confounders such as coexistent atherosclerotic burden including coronary artery disease and peripheral artery disease and age14,15. In a study performed by Violi et al.16, their hypothesis is supported by NOX2 overactivation in COVID-19 patients with > 40% increase compared to controls. The study provides evidence that compared to controls, COVID-19 patients display overactivation of NOX2, which is more marked in patients admitted to ICU. In another study, it was validated that activation of NOX genes increases by the release of NO by the human endothelial cells17. These results support our hypothesis, and we believe that detection of these biomarkers in an array-based manner will help improve the sensitivity and specificity of disease diagnosis. Current technique being used for the detection of VOCs is based on gas chromatography mass spectroscopy (GC–MS), which requires sophisticated instrumentation and prohibits point of care application. Furthermore, it is especially important that the time course of appearance of these biomarkers of inflammation roughly coincides with the time course of disease symptoms, especially onset. Regardless of the instrumentation used to detect these biomarkers, measurements must be made repeatedly on definitively or potentially infected individuals to map the rise and fall of the biomarkers over time.

Electrochemical point of care devices are popular for their effectiveness, ability to interface with Internet of Things (IoT) devices, and ease of access toward various applications18,19,20,21,22. These devices fundamentally operate on electroanalytical principle, where electrode electrolyte interface is explored to obtain signal response as a function of potential/current. These devices are also known as electrochemical sensors mainly classified in two types: electrochemical chemo sensors and electrochemical biosensors. Electrochemical biosensors are mainly electrochemical devices which are able to capture biological/biochemical recognition and are able to transduce the signal using suitable electroanalytical tools. There are numerous electrochemical biosensors reported in literature using various materials, used for signal transduction23,24,25. Room Temperature Ionic Liquids (RTILs) are widely employed as a sensing material for surface modification of electrodes to allow sensing of various gases and VOC26,27,28. We have demonstrated the use of RTIL as a signal transducer for the detection of trace VOCs and gases21,29,30. Moreover, the current breath analyzer-based technology developed for COVID-19 detection include magnetic sensors31, optical sensors32 and electrochemical sensors33. They suffer from drawbacks such as lack of portability into a handheld device, long detection time and interference to signal34.

In this paper, we have demonstrated the first of its kind breathomics device for the detection of NO as a potential biomarker for COVID-19 (Scheme 1). We have demonstrated the utility of a breath analyzer-based sensor platform for the detection of trace amounts of this target species. The sensor surface is modified with RTIL that allows faster diffusion of the target gas and can be used for gas sensing application. This inhouse-designed sensor platform can be used for the measurement of NO with concentrations as low as 50 ppb. We used a potential of 1 V to perform chronoamperometry (CA). This specific potential allows maximum diffusion of the target analyte, in this case NO. The change in current for the target analyte from baseline is three times greater than the baseline and statistically different from cross-reactive species (p ≤ 0.01). We performed cross-reactive studies for other target analytes such as carbon dioxide, acetone, and methanol that are often found in the breath because of respiratory diseases. We have also evaluated the metabolic signals associated with coronavirus (SARS COV-2) using the in house-designed breath analyzer platform. A total of 81 human subjects have been tested, both in different use settings and within the infection cycle. The results so obtained have been statistically analyzed and reported in the paper.