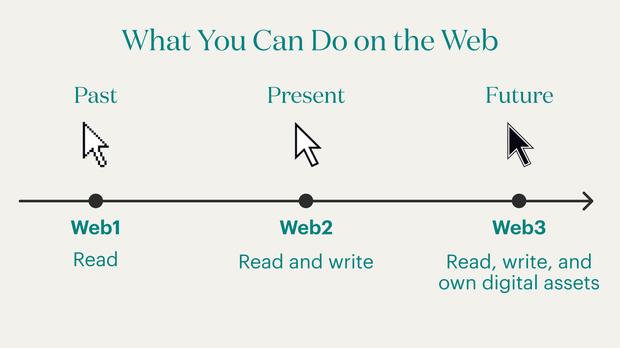 Cryptocurrency exchange Coinbase announced Monday (Feb. 14) that it plans to hire up to 2,000 product, design and technical staff, with Chief People Officer LJ Brock saying, “We see enormous product opportunities ahead for the future of Web3.”

Last month, another top crypto exchange, Crypto.com, said it was increasing the size of its Web3 investment fund from $200 million to $500 million. And Sam Bankman-Fried, CEO of the FTX exchange, has said his $2 billion fund — which will inevitably include a fair chunk of Web3 and metaverse/gaming investments — could be invested in its entirety this year.

And they’re not close to alone. With funds dropping billions into Web3 and metaverse plays — and the metaverse is really a segment of Web3 — Fortune ran an article earlier this month titled “Venture capital firms are shoveling cash at companies building Web3.”

See also: What’s a Metaverse, and Why is One Having a Fashion Show?

Before we jump into what Web3 is, it’s worth pointing out that no one — including those shovelers — really knows what Web3 is, any more than the investors and brands shoveling investments and brand-building dollars into the metaverse actually know how and if it will really work.

With that said, Web3, also known as Web 3.0, is the next generation of the internet, one that will be censorship-free and controlled by its users — aka the people — rather than the Big Tech firms that dominate the internet now. The nomenclature comes from the idea that Web 1.0 was curated gardens — think AOL — and Web 2.0 is the current web, dominate by Google, Amazon, Facebook, et. al.

Said Coinbase’s Brock, “We believe our industry is in its infancy and that building onramps for individuals to participate is critical to driving the next generation use case of crypto.”

Built on a blockchain backbone and run using cryptocurrency, Web3 will be made up of decentralized apps (DApps) and projects run by a system that amounts to direct voting by users and owners of each project’s native token. Everyone will own their own identity and it will travel with them rather than being a currency of the tech giants that run the web today. Thus, you could take your identity, posts, follows and followers from the decentrally controlled Web3 version of Facebook to the Web3 version of Twitter.

All content would be decentrally stored on the blockchain underpinnings, and even finding your way around Web3 would be decentralized. Which could explain why Alphabet CEO Sundar Pichai recently said Google is interested in Web3, and is building out a blockchain team to support it.

Others are not so sure. As PYMNTS noted, just before Christmas, Tesla CEO and crypto booster Elon Musk tweeted out a fairly skeptical view of Web3: “Has anyone seen web3? I can’t find it.” That came several days after he called it “more marketing buzzword than reality right now.”

One of the biggest reasons to cast a skeptical eye on all the Web3 hoopla is by taking a cold, hard look at what “decentralized” control really looks like.

Web3 projects would be heavily controlled by governance token voting — meaning they are controlled by users and anyone else who invests in that project’s cryptocurrency. Which leads to a couple of problems: voter turnout and voter qualifications.

Voter turnout is fairly simple. Currently, the smart contract-controlled decentralized autonomous organizations (DAOs) that allow these projects to run without central management are based on a double voting scheme. A small vote is required to put a governance proposal before the community, and a larger one to pass it.

How’s that working now, when decentralized finance platforms run by DAOs are generally supported by people who know at least a little about how crypto works? Well, earlier this week, the Build Finance project lost its entire treasury — more than a half million dollars’ worth of crypto — when voters supported a proposal to let someone put the entire treasury in their own digital wallet. You can guess what happened next.

And then there’s the spin-off of that, venture capital firms and other wealthy investors taking de facto control of DAO-based projects by the simple process of having knowledgeable people who are paid to pay attention to, propose, and vote for governance decisions. Which is to say, centralized control, much like many public companies are controlled by large stockholders.

So said Web3 true believer Jack Dorsey, CEO of payments firm Block, in reply to Musk’s question: “It’s somewhere between a and z” — a reference to a16z, the blockchain/crypto arm of venture capital giant Andreessen Horowitz, which said last month it wants to raise another $4.5 billion crypto fund. Musk replied by pointing to investments by M31, another venture capital firm.

Dorsey replied in turn, “You don’t own ‘web3.’ The VCs and their LPs do. It will never escape their incentives. It’s ultimately a centralized entity with a different label. Know what you’re getting into…”

Called out for accepting shovels full of VC money when starting Twitter, Dorsey said, “And this is why I know exactly what I mean.”