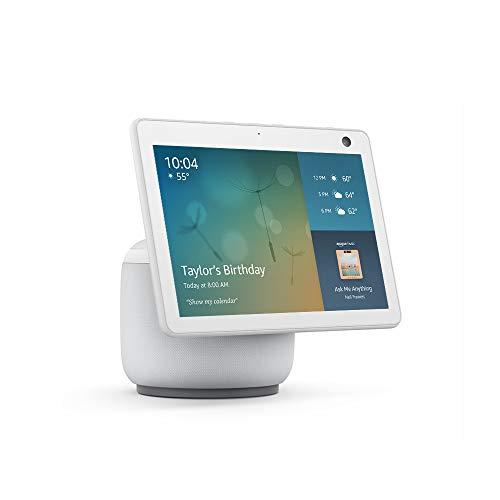 The Alexa widgets made possible by the larger form factor are a terrific addition to the Echo experience, making the Echo Show 15 the perfect family hub. But the low-res panel and camera, anemic audio performance, and absence of a Zigbee hub are letdowns.

Before you say “ouch,” you should know that the headline above is harsher than my bottom-line opinion of the Amazon Echo Show 15. There’s a lot to like about this latest iteration of Amazon’s smart display, starting with the 15.6-inch LCD panel that allows the Echo Show user interface to evolve from those of previous—and smaller—Echo Show devices. But that doesn’t change the fact that Amazon has broken a pattern of making the latest high-end Echo the best Echo.

The Echo Show 15 has the highest resolution of any Echo display, but it’s not based on a particularly high-end LCD panel. Amazon spreads 1920 x 1080 pixels over a 15.6-inch screen that has a relatively poor off-axis viewing characteristic, so you might be disappointed by how soft your photos look in full-screen mode. The display on the next-largest Echo Show, the Echo Show 10 (3rd Gen), measures 10.1 inches and offers a resolution of 1280 x 800 pixels, thereby delivering 2,395 more pixels per square inch.

This review is part of TechHive’s coverage of the best smart speakers and smart displays, where you’ll find reviews of the competition’s offerings, plus a buyer’s guide to the features you should consider when shopping for this type of product.

And while it’s great that the Echo Show 15 can be oriented in either landscape or portrait mode, you’ll need to purchase an accessory if you want to deploy it anywhere other than mounted to a wall (everything you need for that—less the tools—comes in the box). Amazon sent the easel-like Sanus tilt stand ($30) for this review, and Sanus offers two other accessories: a $40 tilt/swivel stand and a $50 under-cabinet mount. My kitchen is too small for the cabinet undermount. The easel is fine if you don’t mind being restricted to portrait mode. Sanus sent me the tilt/swivel stand to check out, and while it tilt and pivot between landscape and portrait, it’s moving parts don’t feel particularly robust and it’s ugly to look at from the back. 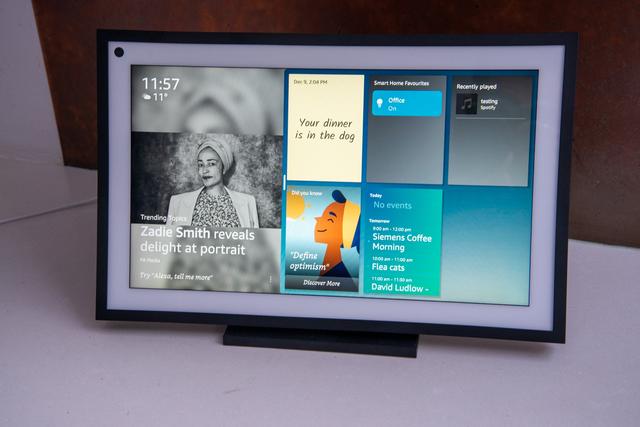 Amazon apparently assumes everyone will use the Echo Show 15 in the kitchen, where outlets are mounted high on the wall, because the display comes with just a 5-foot power cord, terminated in a chunky wall wart. The wall wart won’t block a second outlet, but you’ll need to spend $13 to buy a 6-foot extension cord if the one in the box isn’t long enough.

The only way to avoid the visual pollution of a cord dangling from beneath the display, however, is to cut a hole in the wall behind it and install a recessed outlet; the cavity behind the display isn’t deep enough to hide the wall wart if you already have a high-enough outlet. To its credit, Amazon doesn’t edit its marketing photos to make the cord disappear.

Unlike all the higher-end Echo models preceding it—the 4th-gen Echo, Echo Plus, Echo Studio, and the 2nd– and 3rd gen Echo Show 10—the Echo Show 15 doesn’t have a Zigbee smart home hub. That doesn’t mean it can’t control your smart home devices, but you will need some other hub to act as a bridge unless all those devices either connect directly to your Wi-Fi network or have a Wi-Fi bridge of their own. While Wi-Fi smart home devices are increasingly coming with integrated Wi-Fi adapters, small, low-power, battery-powered devices such as motion and door/window sensors almost always communicate over Zigbee or Z-Wave because Wi-Fi consumes too much electrical power.

The Echo Show 15 is compatible with Amazon’s Alexa Guard service, which means its microphones can listen for the sound of breaking glass and smoke and CO alarms, and it can randomize your smart lighting to make it look like someone is home while everyone is away. Alexa Guard Plus, the paid version of the service that costs $4.99 per month or $49 per year (included in the price of a Ring Protect Pro plan), adds a hands-free emergency help line, listens for other sounds inside the home while you’re away (such as footsteps or a door closing) and can deter unwanted visitors by playing the sound of dogs barking or sounding a siren.

The Echo Show 15’s flat form factor doesn’t leave much room for speakers—there are 1.6-inch, full-range drivers on the back of the left and right sides (top and bottom when in portrait mode)—so it’s no surprise that it’s audio performance is poor. While you can add Amazon’s excellent subwoofer to compensate for the absence of low-end thump, there’s no way to make up for its reedy highs and thin midrange.

This isn’t a smart speaker you’ll want to listen to music on, but it’s fine for watching the news or making voice and video calls (Zoom support is promised, but wasn’t available at the time of this review). If you do want to use it for music, it’s easy enough to pair it with an outboard Bluetooth speaker of your choosing. Most music-streaming services are compatible with the Echo product line—Qobuz being a notable exception—or you can stream music that you own to an Echo from any storage device on your home network.

I’ve front-loaded this review with criticism of the Echo Show 15, so let’s move on to the pros. The size of the display enabled Amazon to add widgets to Alexa’s repertoire for the first time. Widgets make this Echo model a more useful family hub than any smart display I’ve seen, while adding aesthetic appeal at the same time. You can choose from a gallery of 20 widgets, including a new family calendar feature, to-do and shopping lists, a photo gallery, music and podcast exploration, movie suggestions, and more. These appear as tiles on the display, and you can rearrange and reorder them as you see fit. Some widgets—including Schedule and Music—can be resized.

Alexa has long been able to recognize your voice and personalize your experience based on your user profile. Higher-end Echo smart displays—the Echo Show 15, Echo Show 10 (3rd Gen), and Echo Show 8 (2nd Gen) can now also be set up to recognize your face as you approach (this is an opt-in feature). Once you’re recognized, they will personalize the information they display, including your own calendar events and reminders, preferred newsfeeds, recently played music, and personal notes. The Nest Hub Max has a similar feature. You can set up profiles for the children in your home, too, but Amazon’s displays will only show age-appropriate content when children’s faces are recognized.

Another great new feature is a picture-in-picture mode that streams a live camera feed in a smaller window on the display. If you’re following a recipe or watching a TV show on the Echo, you can ask Alexa to show you one of your cameras and a live feed from that device will appear in a small window. You can expand this feed to full-screen mode and back again, and you can move the picture-in-picture view around the screen by touching and dragging it. The one thing you can’t do is drag it over the area occupied by your widgets. Live feeds take 5 or 6 seconds to start, and you can view only one camera feed at a time

The Echo Show 15 has the typical built-in shutter for covering its camera lens, and there’s a button that mutes its far-field microphones and electronically shuts off its camera. Image processing for the visual ID feature is performed on the device itself, versus uploading your image to the cloud. Amazon’s all-new AZ2 Neural Edge processor enables the device to process Amazon’s computer vision and speech recognition algorithms locally and in parallel.

The Echo Show 15’s large size allowed Amazon to evolve and enhance the Alexa user interface, but the need to mount the smart display on the wall will make it a nonstarter for some. Yes, you can buy an accessory to use it on a table or countertop—and the under-cabinet mount is a great option if you’re installing it in a larger kitchen—but those accessories add to its cost, and an Echo Show 15 on a countertop will consume a lot of real estate–at least in landscape mode. I’m also surprised that Amazon left out a Zigbee radio, and that it outfitted this high-end smart display with such a low-res camera: 5 megapixels compared to the 13MP image sensor in the same-priced Echo Show 10 (3rd Gen).

So, why am I awarding the Echo Show 15 four stars in this review? It’s the ideal Echo for people who want an Echo that consumes zero counter space, and the new Alexa widgets make this smart display a fabulous family hub. The widgets probably wouldn’t work on a display that was any smaller.

The Echo Show 15’s appeal is more limited than any other Echo model, but it offers features that no other Echo—or any other smart display—can match.