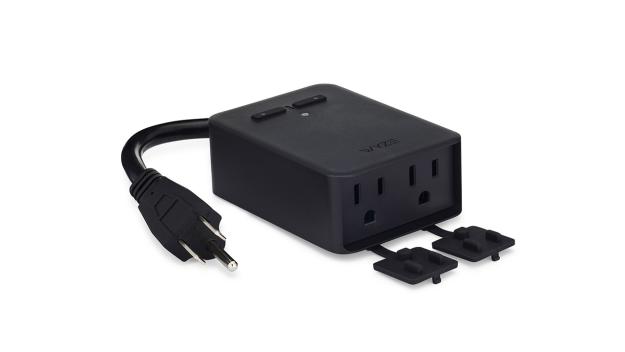 The best outdoor smart plugs are specialized smart plugs, designed to withstand rain, sleet, snow, and hail, but still letting you control all your outdoor gadgets remotely from your smartphone or with Alexa, Google Assistant, or Siri.

Wyze has built a reputation on making good low-cost smart home devices, and the Wyze Plug Outdoor is another such product. Like most outdoor smart plugs, the Wyze Plug Outdoor is a black box, with a cord on one end and two outlets on the other. The cord is a little short at around 6 inches, and the plug is in-line with the cord, so it was tough to cram it into my outdoor outlet and close the cover.

The Wyze Plug has two sockets; at the top of the front of the Plug are two buttons to control each socket, with small LEDs that show which is active. Just below the buttons is a small light sensor; this can be used to tell the outlet when to turn on or off, based on the ambient lighting conditions.

However, you can also create a schedule based on a set time of day, as well as sunrise and sunset — though there’s no offset, such as 15 minutes before or after sunrise. You can also use other Wyze products as triggers— for example, having the plug turn on a light if a Wyze Cam detects motion. These too, can be time-based, but you can’t specify if something should work only after it gets dark out.

You can also set a vacation mode, where the Plug will turn on and off so it looks like you’re home, but I’m not sure how useful that is for an outdoor light. As of this writing, the Wyze Plug Outdoor works with Alexa, but not Google Home.

One of the best outdoor smart plugs for scheduling

TP-Link's Kasa Smart Outdoor Plug KP400 has two outlets, so you can control two devices independently. The plug is a substantial 4.9 x 2.4 x 2.3 inches, but housed inside its thick plastic housing is a Wi-Fi radio that should connect to your router from up to 300 feet away. The KP400 is IP64-rated, so it can withstand dust and most rainfall, but you should ensure that the outlets are facing downward and covered when not in use.

Aside from the hardware, it's TP-Link's Kasa app that sets this device apart from other smart outlets. The app makes the setup process exceedingly simple; it works with Alexa, Google Assistant, SmartThings and IFTTT, and it has pretty good scheduling options for letting you turn your lights on and off at certain times — including sunset and sunrise. There’s even an offset if you want the lights to turn off at a set time before sunrise, or on before sunset. The app also lets you create scenes and automations to work with other Kasa devices. However, Kasa’s app still lacks two-factor authentication. 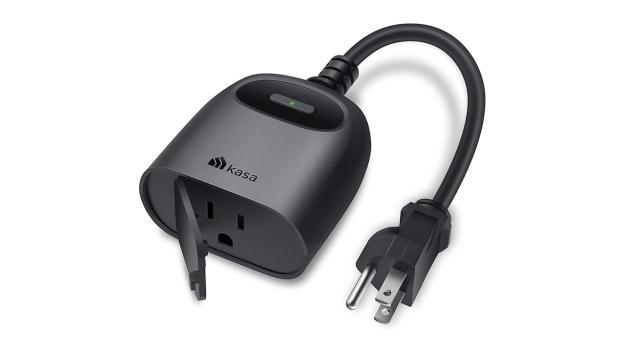 -On the large side-Needs to connect to hub

The Ring Outdoor smart plug is a massive brick. At the bottom are two plugs, each protected by a rubber flap. At the top is a 6.5-inch cord that’s long enough to plug the Ring into an outdoor outlet, while still being able to close your outlet’s door. I especially like that the prongs are at a right angle to the cord; it makes it much easier to close the door.

The Ring also comes with three screws and wall anchors.On the front of the Ring is a large circular button that’s blue in the center; you can press on either side of the button to control each outlet independently. The button makes a slight clicking sound.

Unlike most other smart plugs, the Ring needs to connect to a hub, which can either be a Ring Bridge ($49) or an Amazon Echo smart speaker. Within the Ring app, you can configure the two outlets to work together or separately, and create schedules for when it turns on and off. In all, the Ring Outdoor Smart Plug is a good device for those invested in the Ring ecosystem.

-Only one plug-No two-factor authentication

One of the problems with most smart outdoor plugs is that they lack a dimming function. The Kasa Smart Wi-Fi Outdoor Dimmer lets you do, well, exactly that — dim whatever lights are connected to it. It’s great if you want to create even greater ambiance in your outdoor space. Keep in mind that not all lights will react the same to being dimmed — some may flicker.

The Kasa app has a ton of features, from scheduling to connecting the plug to other TP-Link smart home devices, to controlling it with Alexa, Google Assistant, and SmartThings. However, like TP-Link’s other outdoor plug — as well as all of its other smart home devices — the Kasa app lacks two-factor authentication, which makes it easier for hackers to potentially break into your account and take control of your smart home devices.

A well-designed outdoor smart plug but a simplistic app

GE’s outdoor smart plug looks like a more bulbous version of the TP-Link KAsa 400. We like that the prongs on the GE plug are perpendicular to the 7-inch cord; the prongs are slightly angled, too, so you can fit more than one in a standard outlet. Two soft rubber flaps help protect the outlets when they’re not in use. Above each outlet is a small button to control each independently, with two small LEDs indicating their status.

GE’s app is intuitive — icons are large, bright, and instructions easy to follow — but it’s a bit simplistic. You can create schedules for the plugs to turn on and off at scheduled times, but there’s no sunrise or sunset option, for instance (you could do this with Alexa, but that’s a separate step). It also lacks two-factor authentication, and I found the app crashed on me while I was using it on an iPhone running iOS 15. And, while it works with Alexa and Google Assistant, it’s not compatible with Siri.

+Lets you control up to four devices separately+Well-designed app

The PowrUI Smart Power Strip is built for those Clark Griswold types who have a lot of outdoor smart lights, and not enough outlets. Extending from the body of the PowrUI are four plugs, all of which can be controlled independently. Annoyingly, though, it all has to be done through the generically named Smart Life app (available for Android and iOS). That’s because the only button on the smart plug itself turns off all four plugs. A green LED above each plug indicates whether it’s on or off.

The Smart Life app is generally well-designed, but pretty basic. You can rename each plug, set a countdown timer, and create schedules for each plug to turn on and off, but there’s no sunrise or sunset setting. However, the plugs can also be controlled via Alexa or Google Assistant, so you can use those assistants.

While the WeMo’s prongs are perpendicular to the cord, they’re not angled like the GE Cync plug, so it may be more difficult to fit two to an outlet. It’s not the most attractive, but it gets the job done. With an IP44 rating, it’s a little more susceptible to rain than other plugs, but it has covers for both outlets. However, the dumbest thing about WeMo’s smart plug is that while it has two outlets, you can’t control them separately.

Fortunately, WeMo’s app is pretty robust. In addition to scheduling — including sunrise and sunset offsets — it has an Away mode, which, when set, will turn your lights on and off randomly to make it look like you’re home. While less applicable for outdoor lights, it’s a good feature for indoor smart plugs. And, not only does WeMo’s plug work with Alexa and Google Assistant, but it’s also compatible with HomeKit — the only outdoor smart plug on this list with that ability. If it had the ability to control each outlet separately, this would be darn near perfect.

If you’re invested in the Lutron Caseta family of smart light switches and smart plugs, then it’s worth taking a look at its outdoor smart plug. However, its high price of $80 — four times that of other outdoor smart plugs — and the fact that it only has one plug for its massive size moves it well down our list. Lutron’s plug also makes it harder to fit into covered outlets. While the plug itself has an on/off switch, you can also pair it with a remote ($20, sold separately) if you’re looking for an easy way to control it from inside.

Similar to Ring’s outdoor smart plug, in order to control the Lutron plug from your phone or use any of its features, you need to connect it to a Lurtron bridge, which itself costs $80, and which needs to be within 30 to 60 feet of the plug. However, once connected, Lutron has a very robust app and ecosystem — you can control it with Alexa, Google Assistant, and Siri, and you can not only create schedules, but even use geofencing to have the lights turn on automatically when your phone gets within range of your house.

What to look for when buying an outdoor smart plug

Most outdoor outlets have a protective cover of some sort that shields them from the elements; some covers can close even when something is plugged in to the outlet. However, if a smart plug’s prongs are in line with its cord, then this often means that the cord will have to be bent 90 degrees in order for you to close the cover, which could lead to the smart plug wearing out sooner.

Chances are, you’ve got more than one thing to plug in outdoors, so the better smart plugs have at least two outlets. More importantly, they let you control each outlet separately, making it much easier to control when things turn on and off.

One of the features we look for in the best outdoor smart plugs is the ability to schedule them to turn on at sunset and off at sunrise. If the lights you want to control are up all year-round, you don’t want to have to keep fiddling with the app as the days get longer and shorter. The very best apps in this regard also have an offset, so you can have your lights turn on at a set time before sunset — when it’s getting dark.

This should be a given, but any outdoor smart plug should be able to withstand some rain and snow. Most have what's called an IP (Ingress Protection) rating of 64 or higher; this means they can handle sprays of water, but shouldn't be submerged. Regardless, you should always try and mount an outdoor smart plug so that its outlets are facing down, and cover up the plugs that aren't being used.

How we test the best outdoor smart plugs

In order to determine which are the best outdoor smart plugs, we install them outside our home, and evaluate a few key factors:

We take these, as well as other factors such as the price into consideration, and then compare that to competing devices to determine our final rating.