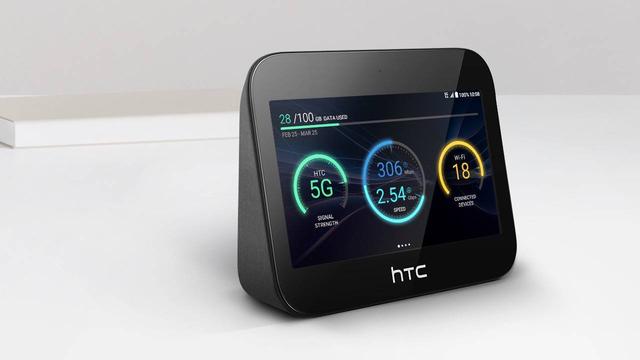 HTC brought along its vision of 5G devices to Mobile World Congress 2019 this week, but not in the shape of a phone. Instead, the HTC 5G Hub puts high-speed networking into a mobile smart hub, a combination smart display and router that won't be pinned down to one location.

At first glance, you could be forgiven for mistaking the HTC 5G Hub for a direct Google Home Hub or Lenovo Smart Display competitor. In fact, the 5-inch 1280 x 720 touchscreen runs Android 9.0 with HTC Sense for HTC 5G Hub, a version of the company's UX designed specifically for the gadget.

However it's the connectivity which is really special. Inside there's Qualcomm's Snapdragon 855 chipset with the Snapdragon X50 5G modem. That means – if you have coverage with a compatible 5G network, at least – the HTC 5G Hub can get online at faster speeds than with 4G LTE. Of course, there's also backward compatibility with 4G LTE as well.

Rather than hogging that 5G data to itself, the hub shares it out. There's WiFi 802.11 a/b/g/n/ac/ad and Bluetooth 5.0, and up to twenty devices can connect to the HTC 5G Hub and share its bandwidth. A gigabit ethernet port on the back is available, too, alongside a USB-C 3.1 with DisplayPort. The latter can be used to play video on a TV or other screen, at up to 4K resolution.

For long-term use, you can obviously plug the HTC 5G Hub into a power outlet. However there's also a 7,660 mAh battery inside, which can keep the router running. There's DC Charging and Quick Charge 3.0 support. 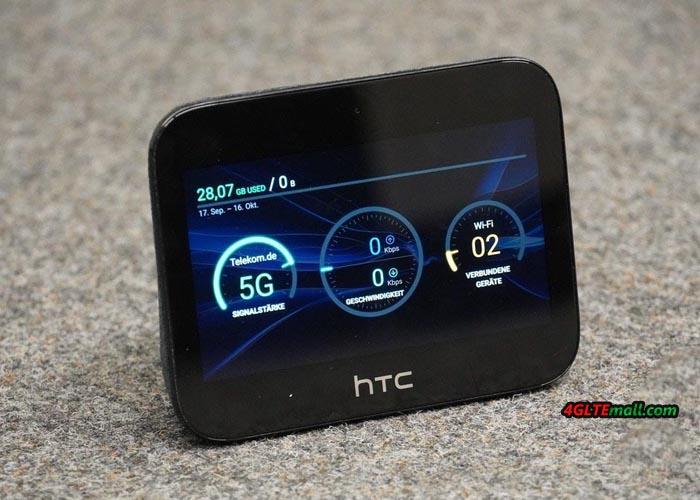 The whole thing weighs 340 grams, or about three quarters of a pound, and measures in at 129 x 100 x 43 mm (the latter figure being only the thickness at the edge, mind). It should make too big a dent in your backpack, then. It'll also work with Android apps, and there's a microSD card slot which can take up to 512GB cards. Dual speakers and an always-on microphone support features like "Ok Google" voice triggers.

HTC's vision is that the same 5G Hub could satisfy home, business, and mobile users. At home, there's a fair chance that 5G networks – when up and running – could end up as fast as, or even faster than, users' existing home broadband connections. For businesses, being able to quickly add a fast internet connection could make deployment of new offices and teams more straightforward, and there's support for enterprise-friendly features like VPNs.

In-between, though, is mobile use. That's where the HTC 5G Hub really distinguishes itself from existing DSL/cable connections: you could take your high-speed router to a friend's house and, assuming they have 5G service there too, be online just as rapidly as if you were at home. HTC says the battery should be good for a full day of 5G use.

In the future, HTC envisages the 5G Hub as representing the next stage of the VR experience. You could, it theorizes, end up driving your VIVE Focus headset directly from the 5G mobile router, with no PC or cables required.

Of course, you'll need a 5G network for all that. HTC is partnering with Sprint, Telstra, Three UK, Deutsche Telekom in Germany, Sunrise in Switzerland, and Elisa in Finland: all will be offering the HTC 5G Hub. Location depending, it'll go on sale from Q2 2019.