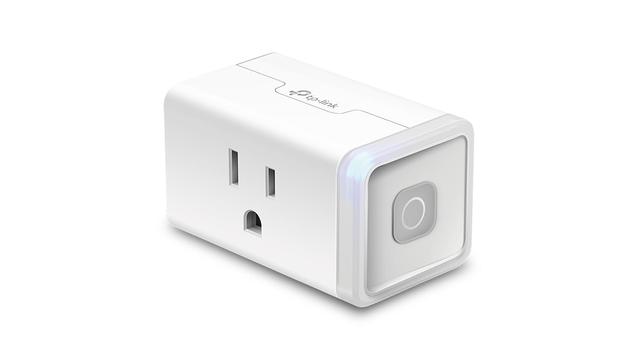 Designed for small electronic devices that draw less than 12 amps of power, the TP-Link Kasa Smart Lite HS-103 ($14.99) is a small single-outlet smart plug that turns traditional appliances into connected ones. It’s easy to install and can be controlled with a user-friendly mobile app or with your voice, and it works with numerous third-party smart home devices. At just under $15, it’s the most affordable smart plug we've tested, but it won’t tell you how much power you’re using like the $17.99 Samsung SmartThings Wi-Fi Smart Plug does.

The Kasa Lite plug is rated for small appliances that draw less than 12 amps, such as coffee makers, fans, and table lamps. It measures 1.5 by 2.6 by 1.5 inches (HWD), making it smaller than the SmartThings plug (1.5 by 2.6 by 2.1 inches) and just a hair bigger than the Aukey Wi-Fi Smart Plug (1.5 by 2.5 by 1.3 inches). It has a single three-prong receptacle on the front, a 3-prong plug on the back, and an on/off button on the right side. Also on the right side is an LED status light that blinks amber and blue during setup, glows solid blue when the plug is powered up and connected, and glows solid amber when the connection is lost. Inside is a 2.4GHz Wi-Fi radio for connecting to your home network.

You Can Trust Our ReviewsSince 1982, PCMag has tested and rated thousands of products to help you make better buying decisions. (See how we test.)

As with other TP-Link Kasa smart home devices including the Kasa Smart Wi-Fi Outdoor Plug KP400 and the Kasa Smart Bulb KL50, the Lite plug uses the Kasa Smart mobile app (for Android and iOS), which makes it easy to control the plug and create automations. It opens to a Devices screen with panels for all of your installed Kasa smart devices, separated into category groups. The HS-103 panel displays the name that you gave the plug and has an On/Off button off to the right. Tap the panel to open a different screen with a larger On/Off button and Schedule, Timer, Away, and Runtime buttons along the bottom.

Use the Schedule button to create on and off schedules for specific times and days of the week. With the Timer button you can set a countdown timer to have the plug turn on or off, and the Away button lets you create a schedule that has the plug turn on and off randomly to give the appearance that someone is home while you're away. The Runtime button takes you to a screen where you can see how many hours the plug has been on, but you don’t get the energy consumption statistics that you get with the Samsung SmartThings and ConnectSense Smart Outlet 2 plugs. 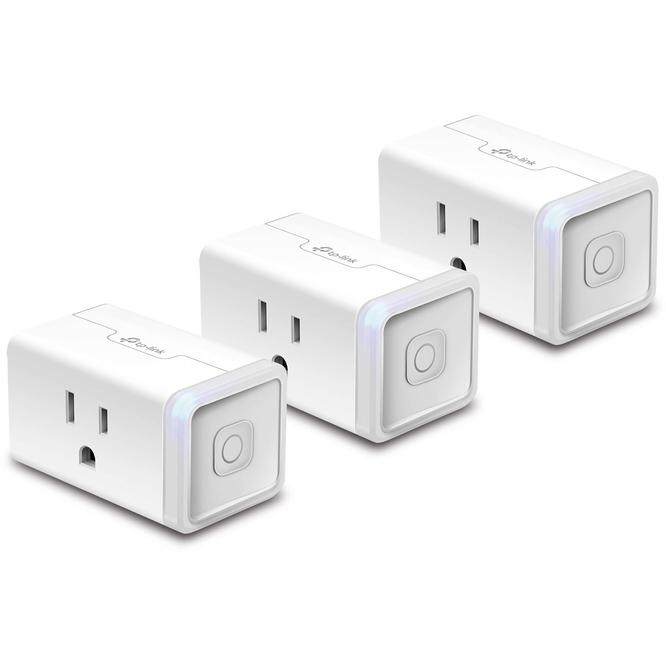 Back at the Devices screen, there are Scenes and Smart Actions buttons. The Scenes button opens a screen where can you assign the plug to one of three preset scenes (Good Morning, Good Night, Movie Night) that will turn the plug and other devices on or off with the touch of a button, or you can create your own custom scene. Smart Actions allow you to create automations to have the plug be triggered by other Kasa devices. For example, you can have a camera’s motion detection turn the plug on or off.

As with other Kasa smart devices, the HS-103 can be controlled using Amazon Alexa or Google Assistant voice commands. It also works with IFTTT applets, which are mini programs you can create to have the plug interact with third-party devices such as lights, thermostats, and garage door openers. It even works with Microsoft Cortana, but Apple HomeKit and Siri voice commands aren't supported.

Easy to Install and Use

The HS-103 installs in minutes. Start by downloading the Kasa Smart app and creating an account. Tap the plus icon in the upper right corner of the Devices screen, and then tap Device. Select Smart Plugs from the list, then select the Smart Plug Lite.

Follow the on-screen instructions to power up the plug and verify that the LED is blinking amber and blue. Use your phone’s Wi-Fi settings to connect to the plug, then return to the app and connect the plug to your home Wi-Fi SSID. Once connected to your network, the plug will be automatically added to your Alexa device list. Give it a name, let the software update the firmware if necessary, and you’re all set.

The plug performed well in testing. It responded quickly to on and off commands using the physical button and the mobile app, and it always responded to Alexa voice commands. I created schedules to have it turn on at 9:00 a.m. and off at 1:00 p.m. on Mondays and Thursdays, and they too worked without a hitch.

The Most Affordable Smart Plug

The TP-Link Kasa Smart Wi-Fi Plug Lite HS-103 lets you turn traditional small appliances into smart ones for under $15. It can be controlled with your voice or with your phone, and it can be triggered by third-party devices. Setup is a snap and you can create automations to have the plug work with other Kasa smart devices such as cameras and switches, but it lacks energy reports that tell you how much power it's drawing. For that you’ll have to spend a few dollars more on our Editors’ Choice winner, the Samsung SmartThings Wi-Fi Smart Plug.

The super-affordable TP-Link Kasa Smart Wi-Fi Plug Lite HS-103 can be controlled with your phone or voice and works with lots of other smart devices.

Sign up forLab Report to get the latest reviews and top product advice delivered right to your inbox.