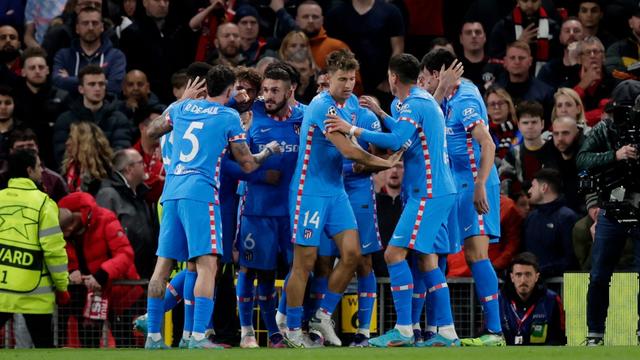 Atletico Madrid knocked Manchester United out of the Champions League with a 1-0 victory at Old Trafford to seal a 2-1 aggregate victory and progress to the quarter-finals.

Renan Lodi’s first half goal won the second leg and ultimately the tie, while Atletico also leaned on a big performance from a resurgent Jan Oblak between the sticks.

With it, United’s last hope of silverware this season goes up in smoke and frustration among fans at Old Trafford was clear as the full-time whistle sounded.

Both goalkeepers made top saves in the opening 15 minutes alone. Anthony Elanga was denied from close-range by Oblak, although the giant Slovenian knew little about it as it caught him flush in the face, while David de Gea flew to his right to tip wide from Rodrigo de Paul.

Bruno Fernandes felt he should have had a penalty after being caught by Reinaldo, but neither the referee nor VAR saw it that way. Not long afterwards, Atletico had the ball in the net through Joao Felix, but a flag went up against Marcos Llorente for straying offside in the build-up.

Atletico did properly take the lead, however, when Lodi met a curling cross from Antoine Griezmann at the back post. Felix’s clever backheel had created the opening for the overlapping Frenchman. United protested, feeling Elanga had been fouled as Atletico won it back at the other end.

Oblak came up big for the visitors towards the end of the first half, palming away a dipping Fernandes shot from distance, before high claims under pressure in stoppage time.

Despite trailing, United had played well in the first half and Elanga had an early chance in a rapid start to the second 45. Jadon Sancho caught a sweet volley in the penalty area at the hour mark but couldn’t keep his effort down and it whistled over the bar.

As the game wore on, Atletico managed the game as few others know how to. 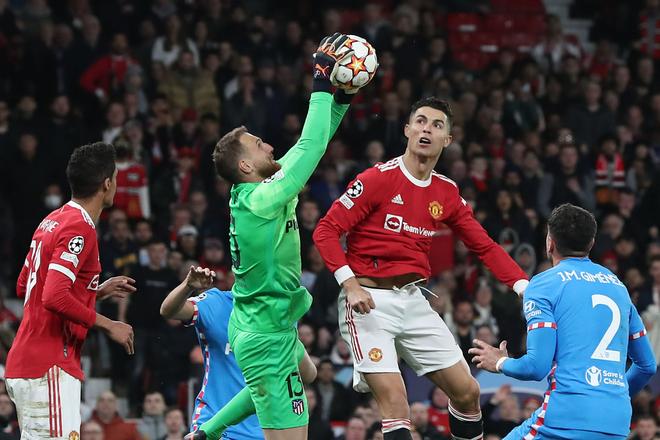 A flurry of United changes came, with Ralf Rangnick going for broke by sending Marcus Rashford, Paul Pogba and Edinson Cavani onto the pitch. But as the hosts built a head of steam, Oblak was proving unbeatable and made a stunning reflex save from a Raphael Varane header.

But the equaliser never came and the game came to a close, Diego Simeone ran off down the tunnel the victor, dodging missiles from the stands as he went.

David de Gea (GK) - 6/10 -Responded well when called upon but was left too exposed when Lodi scored his easy header.Diogo Dalot (RB) - 5/10 -Caught ball-watching at the back post as Atletico took the lead. Attacked better in the second half.Raphael Varane (CB) - 6/10 - Didn't get close enough to Felix in the build-up to the breakthrough goal. Thought he'd equalised but for Oblak's big right hand.Harry Maguire (CB) - 5/10 - Still too shaky and didn't lead well enough for the occasion of a big Champions League night.Alex Telles (LB) - 5/10 - Saw plenty of the ball and got forward pretty well but his crossing was ultimately not good enough.

Scott McTominay (CM) - 6/10 -Did a good job in possession and recycled it well in midfield. Withdrawn for Matic.Fred (CM) - 7/10 -Seemed to everywhere all at once in a higher position than fans have been used to seeing. Tactically sacrificed for more attackers.Bruno Fernandes (AM) - 5/10 - Felt he should have had a first half penalty and seemed to spend a lot of his evening moaning at the referee. Forced a good save out of Oblak in first half stoppage time.

Anthony Elanga (RW) - 6/10 -Had good opportunities in either half but couldn't take them this time.Cristiano Ronaldo (ST) - 5/10 -Didn't get the quality of service he needed against an Atletico defence that could quickly shut things down.Jadon Sancho (LW) - 6/10 - Blazed a volley over the bar early in the second half and looked good on the ball, but wasn't involved consistently enough.

Jan Oblak (GK) - 9/10 - Made big saves early and late in the first half. Several high claims also eased pressure on his defenders, while a top reflex save from Varane kept United out in the second half.Stefan Savic (CB) - 7/10 -The former Manchester City player recorded a clean sheet on his first career appearance at Old Trafford.Jose Gimenez (CB) - 8/10 - Got his head to everything that came his way.Reinaldo (CB) - 6/10 -Arguably lucky to survive a penalty claim in the first half, but was otherwise composed and strong.

Marcos Llorente (RWB) - 6/10 -A good outlet on the right. Stayed marginally offside when Atletico initially thought they had taken the lead.Rodrigo de Paul (CM) - 6/10 -Made De Gea work more than once with efforts from distance.Koke (CM) - 7/10 -Worked really hard out of possession and led by example. Succumbed to a knock with just over 10 minutes left.Hector Herrera (CM) - 7/10 -Typically forceful in the tackle. Effective but probably lucky to escape a yellow card.Renan Lodi (LWB) - 7/10 -Headed his team ahead in the closing stages of the first half, having been the provider in the first leg.

Antoine Griezmann (ST) - 8/10 -Made an intelligent run to get into space to cross the ball for Lodi to score. Did his share of defensive work too.Joao Felix (ST) - 8/10 -Had the ball in the net again but it was ruled out for offside. Played a key role in the goal with a smart backheel and was generally very classy whenever Atletico created chances in open play.