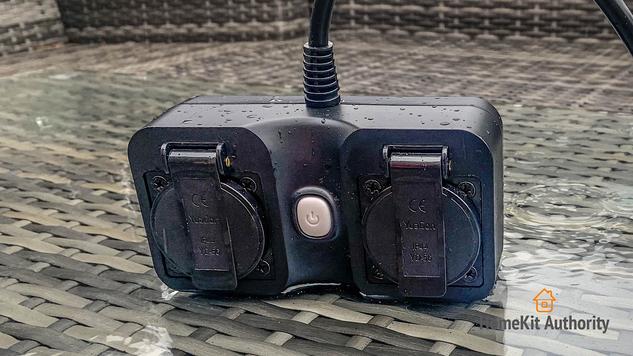 We may earn a commission for purchases using our links. Learn more.

Even though HomeKit has been around since iOS 8, Apple's smart home platform is known for having a much smaller pool of accessories when compared to Alexa or the Google Assistant. For some categories, such as light bulbs, the smaller selection doesn't really hit home, but for others, like outdoor smart plugs, it rears its ugly head. Currently, there are just three such options on the market, two of which are becoming increasingly harder to find.

The latest option, though, the Meross Outdoor Smart WiFi Plug which arrived late last year, brought some much-needed relief for HomeKit fans. The outdoor plug comes with two independently controlled outlets, one more than a competitor, and with a price that is around half the price of the other. I have been running the outdoor plug through its paces for the past month, and despite a few minor flaws, I can easily say that its the best option for HomeKit fans today.

Bottom line: The Meross Outdoor Smart WiFi Plug and its affordable price makes it the best outside option available for HomeKit today. Even if you don't use Apple's platform, it is still a great value as it packs in two independent outlets, fast response times, and support for Alexa, SmartThings, and the Google Assistant.

The Meross Outdoor Smart WiFi Plug sports the standard outside outlet design language, with an all-black, plastic rectangular frame housing the smarts, and a cord portion that extends out from the chassis. The cord is seven and a half inches in length, which provides ample distance from the bulkier section, which comes into play when using standard covered outdoor outlets.

The plug includes a total of two outlets positioned near the bottom, which can be individually controlled through HomeKit, and on-device via a small translucent button that glows green when an outlet is on. The outlets are slightly recessed into the housing and are situated close to each other, with around a quarter of an inch or less of space in between.

When not in use, either both outlets or just a single outlet can be covered with a flexible flap that is attached to the frame for additional weather resistance. The plug as a whole has an IP44 weather resistance rating, which is suitable for most outdoor use cases, but it is not meant to be submerged. Around the back of the plug is one screw slot for mounting it to a wall, which can keep it up off of the ground.

The Meross Outdoor Smart WiFi Plug can handle up to 1,800 watts in use, but it is designed for lighter applications such as powering decorations or lights. It is not meant for higher power applications such as pool filters, pumps, or motors, which may cause its overload protection to fail. Other safety features include a fire-retardant housing, and the plug is ETL listed. 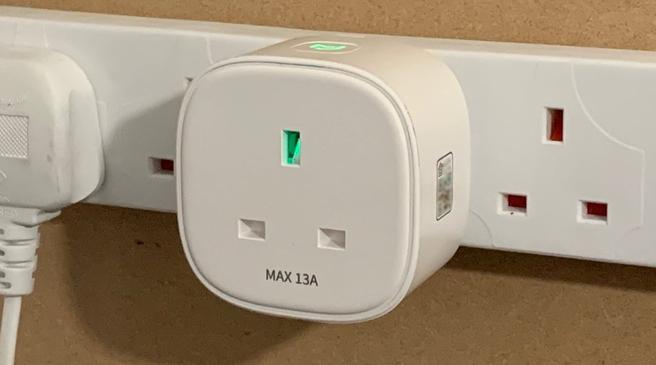 The plug connects to home networks via 2.4ghz Wi-Fi, without an additional hub required. In addition to HomeKit and the Home app, the plug works with Amazon's Alexa, the Google Assistant, and SmartThings via the Meross app on iOS and Android. Once connected, the plug can be used with automations, scenes, schedules, timers, and of course, quick remote controls through all of the various platforms.

Being a smart plug, setting up the Meross outdoor offering was quick and easy. After plugging it in, a simple scan of the HomeKit set up code in the iOS Home app is all that is needed to get up and running. For those outside of the HomeKit ecosystem, the Meross app will walk you through a series of steps after creating an account, and additional smart home integrations can be added after. In both cases though, pairing should take between five to ten minutes tops.

Despite its low price and connectivity challenges stemming from outdoor placement, the Meross Outdoor Smart WiFi Plug has performed admirably.

As previously mentioned, both of the outlets on the Meross Outdoor Smart WiFi Plug can be controlled independently, which is fantastic for the price. Since the HomeKit outdoor plug market is rather small, fans of the platform only have one other option that featured two outlets, the iDevices Outdoor Switch, which comes with a much steeper price tag.

Despite its low price and connectivity challenges stemming from outdoor placement, the Meross Outdoor Smart WiFi Plug has performed admirably. Commands sent to the plug via the Home app or Siri are carried out within a second or two, and it has been extremely reliable since I have began testing. I have yet to come across an instance of "no response" from HomeKit as of yet, which is something that I cannot say about another competitor, the iHome iSP 100 Outdoor Plug that I have had battles with over the years.

Too close for comfort

Meross Outdoor Smart WiFi Plug: What I don't like

Even though the Meross Outdoor Smart WiFi Plug includes two independent outlets, actually using two of them at the same time can present an issue. The rather small distance between the two outlets will cause frustrations if both of the desired devices have anything larger than a standard plug end, and the recessed positioning will clash with bulkier boxes.

Sticking with the hardware, I would have loved to have seen energy monitoring capabilities come with the plug. While certainly not critical, having the ability to keep tabs on consumption and costs for some of my outdoor gear would have been nice, but I fully understand that it probably would affect the low price tag.

The only other complaint that I have with the plug is with regards to the Meross app and adding the device. For some reason, despite being available in the Home app, the Meross app attempts to locate the plug via the local network, and not by just asking for permission to use data from HomeKit. During my review of the company's Smart WiFi Plug Mini, I noted that the app was not able to discover them on my network, leading to a little frustration. The same applied to the Outdoor Smart WiFi Plug at first, but a couple of weeks later, while finalizing screenshots for this review, the app was finally able to locate them, and I was able to use all of the features, like firmware updates. So, while everything is working great now, it is something to be aware of just in case you experience the same.

When it is all said and done, the Meross Outdoor Smart WiFi Plug is simply the best option around for those looking for a HomeKit-enabled outlet for outside the home. The affordable price, combined with fast response times, great reliability, and two independent plugs, make up for the lack of energy monitoring, and slight design annoyances.

For HomeKit fans, the pairing process couldn't be simpler, just plug it in and give it a scan, it's that easy. For others, after setup, the plug works with all of the major voice assistants, making it highly versatile. Whatever your preferred operating system is though, just be sure to have an extension cord on hand if you plan to use it with bulkier plugs.

Bottom line: The Meross Outdoor Smart WiFi Plug and its affordable price makes it the best outside option available for HomeKit today. Even if you don't use Apple's platform, it is still a great value as it packs in two independent outlets, fast response times, and support for Alexa, SmartThings, and the Google Assistant.

We may earn a commission for purchases using our links. Learn more.

Laptop-like windowing could be coming to iPadOS, and I'm all for it

This rumored update to iPadOS could unlock the power of the iPad and allow it to become a true laptop replacement for many.

Apple has just unveiled its first look at 'The Essex Serpent', coming to Apple TV+ on May 13. It stars Claire Danes and Tom Hiddleston.

Strava re-enables Apple Health syncing after switching it off unexpectedly

Strava appears to have re-enabled syncing with the Apple Health app after unexpectedly turning it off earlier this week.

Make your ceiling fan smart with these HomeKit switches

Adding a HomeKit-enabled switch for your ceiling fan can is an easy way to keep your cool when things get a little too hot. Take control of your fan with the best switches that you can buy today.

Christopher spends most of his time writing and dreaming about all things HomeKit. If you wish to join him on his quest to automate everything, you can follow him on Twitter at @itschrisclose.