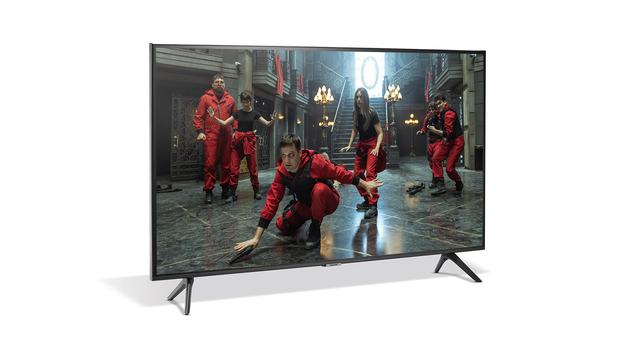 Bells and whistles are in predictable short supply, but the Samsung UE43AU7100 absolutely nails the fundamentals of being a TV in 2021.

There’s always a balance to be struck, and when a company is trying to deliver a TV at a realistic price, it can become tricky in the extreme.

Samsung has done it before, mind you, and with the AU7100 it’s aiming to incorporate a few features from higher up its model range without affecting day-to-day performance or the price in any kind of adverse way.

Samsung likes to tailor its truly mainstream TV ranges to the specific territory in which they’re sold – and this is the reason there’s currently no like-for-like equivalent to the AU7100 in either Australia or the US. But when those markets get their own bespoke AU7100 variant, you can be sure of a couple of things: first, it will be available in a large number of screen sizes; and second, it will be very competitively priced.

There’s a lot to be said for keeping design ‘flourishes’ to a minimum where TVs are concerned, and that goes double for models that are meant to appeal to as many people as possible. So the fact the UE43AU7100 is an anonymous looker is, we reckon, a good thing.

Its bezels are slim, its plastics (and it’s almost entirely plastic) don’t feel overtly cheap, and the simple push-and-click ‘boomerang’ feet look nicely functional. They leave enough room between the screen and the surface it’s standing on for a soundbar, but they’re quite far apart, which means you’ll need a fairly wide surface on which to place this TV.

Of course, you may wish to hang your new TV on the wall. Go right ahead: the AU7100 is a touch under 6cm deep, and it will happily fit onto any VESA wall bracket. 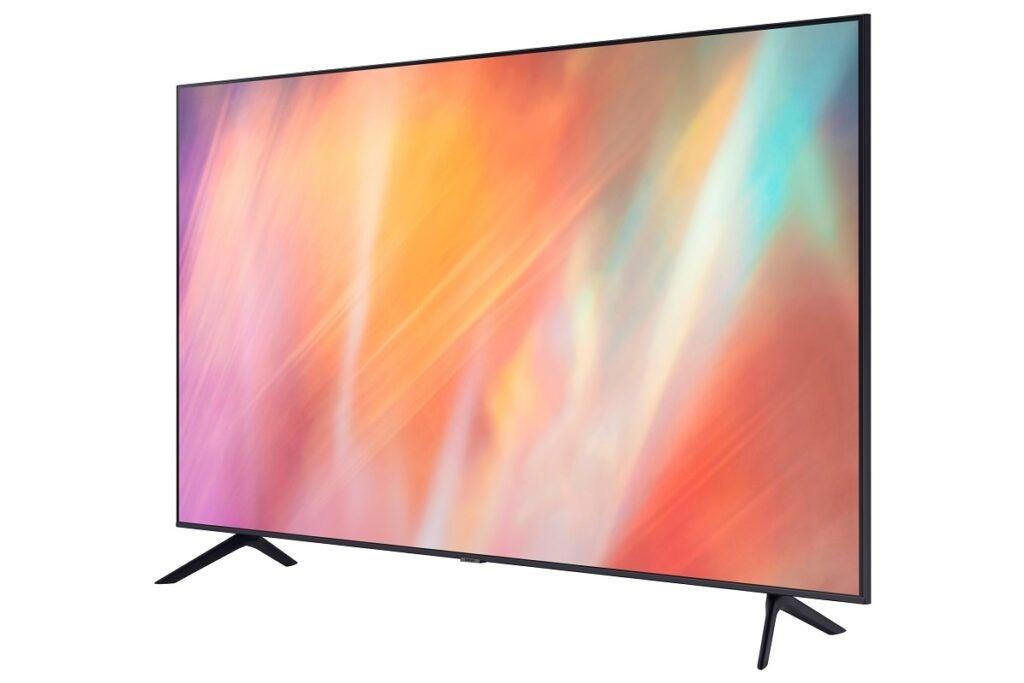 At this price, we’re not expecting any cutting-edge features or functionality. But it’s safe to say the UE43AU7100 is more than adequately specified.

This is a 4K LCD screen with LED backlighting arranged around the edges of the screen. Samsung refers to it as a ‘Crystal UHD’ screen, and picture performance is handled by the most up-to-date version of the company’s ‘Crystal Processor 4K’ engine. HDR is on the menu in its HLG, HDR10 and HDR10+ varieties, but not Dolby Vision.

Connectivity is more than adequate, given that it runs to three HDMI inputs, an Ethernet socket, a USB 2.0 jack and a CI card slot. Wireless connection is available via Bluetooth 4.2 and dual-band Wi-Fi. Next-gen console gamers anxious for a TV that doubles as a proper monitor should probably look elsewhere, though – although all three HDMI sockets cover the Auto Low Latency Mode aspect of HDMI 2.1 specification, that’s as far as it goes. Still, at least one of the HDMIs features eARC, plus there’s also a digital optical output in case you haven’t upgraded your soundbar in a while.

Control is available via Samsung’s generally pretty decent Smart Things app, or – if you’ve an appropriate smart speaker on a common network – Amazon Alexa or Google Assistant via voice. Or, you can use one of the two bundled remote control handsets: one is a cheap-feeling device with way too many buttons; the other a rather more elegant ‘just the essentials’ alternative.

No matter the method you select, though, you’ll be in control of a pared-back version of one of the most successful smart TV interfaces around. Samsung’s reliance on Tizen for its UIs goes back years, and it’s always easy to see why: it’s logical, easy to navigate and intuitive.

Samsung has had plenty of time to perfect its ‘LCD screen backlit by edge-arrayed LEDs’ game, and as a consequence there are areas of the UE43AU7100’s picture performance that defy its price point. Naturally, it does its best stuff when given the best stuff to work with. And because of its specification, that turns out to be some native 4K content with HDR10+ assistance. Which, for our purposes, means a 4K Blu-ray of Drew Goddard’s Bad Times at the El Royale.

The most immediately obvious price-defying aspect of the Samsung’s picture quality is detail retrieval. It’s high in every circumstance, whether it’s describing the many and various skin-tones and skin-textures of the ensemble cast, or giving proper expression to the intricate patterns of clothing or furniture. And it’s ably supported in this respect by a colour palette that’s wide-ranging, convincing and capable of delivering very subtle variations of shade.

The AU7100 loads plenty of detail in the darkest and brightest tones, too – although here it isn’t quite as accomplished. Detail levels are never less than generous, and it’s possible to discern variation in even the murkiest scenes, but the Samsung struggles to produce actual black, settling instead for shades of extremely deep grey. And when you consider this along with the fact that the AU7100 just isn’t all that bright a screen, it follows that contrasts aren’t all they might be. Backlight control is very good, however.

We’re back on surer ground where edge-definition and motion-control are concerned. You’ll find different sources require different settings to ensure on-screen movement stays smooth and believable, but the AU7100’s menus are neither extensive nor intimidating. Picture noise is basically absent, and even open areas of uniform colour are free of banding or other unnatural occurrences.

So, broadly speaking, the AU7100 is about as good a 4K screen as you can realistically expect at this sort of money. And it makes just as much sense when it comes to upscaled 1080p images, too. Naturally edges aren’t quite as crisp and detail levels aren’t quite as impressive, while insight into skin-tones in particular takes a hit. But the Samsung remains eminently watchable and, where movement-tracking – in particular – is concerned, it deals with the workload admirably.

The AU7100 isn’t too tolerant of less information-rich content than this, though. Stick on a DVD or watch a bit of daytime TV via the tuner, and the Samsung gets noticeably sniffy. Images can get noisy; motion can become vague; colour fidelity pretty much disappears. To put it bluntly, there’s little to be gained by watching low-res content on this Samsung.

Switch to a console, though, and almost all of what’s good about the AU7100’s 4K and Full HD performance translates almost entirely. Yes, next-gen gamers will want something with a few more HDMI 2.1 smarts than the Samsung is packing – but everyone else will enjoy the detail levels, the low-light insight and overall picture quality. Input lag in ‘Game’ mode is pretty low, too.

Imagine a small, affordable TV with two modest full-range drivers and a total of 20W of power. Hasn’t exactly got your hopes up, has it?

To be fair, there are affordable TVs that sound worse than the Samsung AU7100. It’s not shrill, it does pretty decent work with dialogue in the mid-range, and it doesn’t object too stridently if you turn up the volume. But on a fundamental level the AU7100 sounds bland and uninvolving. There’s space beneath the screen for a soundbar, so we’d strongly suggest you fill it.

You want proper 4K picture quality at a realistic price You can pay less, but you’ll be selling yourself short. Equally, you can pay more without making any significant improvements to 4K images.

You expect this to be the end of your spending You may not feel the need to buy a soundbar immediately… but you’ll feel it soon enough.

Some affordable TVs will make you feel like a tight-wad, but the Samsung AU7100 isn’t among them. Its poised and engaging native 4K image quality is available in any number of screen sizes, and it’s very watchable with 1080p content too. Add in a very usable smart TV interface and sound that doesn’t set your teeth on edge too much, and it’s a difficult product to argue against.

News, competitions and exclusive offers direct to your inbox.Terms and conditions

We test every televisions we review thoroughly over an extended period of time. We use industry standard tests to compare features properly. We’ll always tell you what we find. We never, ever, accept money to review a product.

Find out more about how we test in our ethics policy.

Used as the main TV for the review period

Tested with real world use

Tested for more than a week

Can I wall mount this TV?

4K (or Ultra HD) refers to the resolution of a TV’s display, which equates to the number of horizontal and vertical pixels that it can display. 4K TVs have a resolution of 3840 x 2160 (8.3 million pixels), which is four times that of a Full HD TV. With more pixels, you get a sharper, clearer picture than is possible from an equivalent sized 1080p display.

HDR stands for High Dynamic Range and refers to contrast (or difference) between the brightest and darkest parts of an image. HDR content preserves details in the darkest and brightest areas of a picture, details that are often lost in old imaging standards. HDR10 is mandated to be included on all HDR TVs. It’s also supported by 4K projectors.