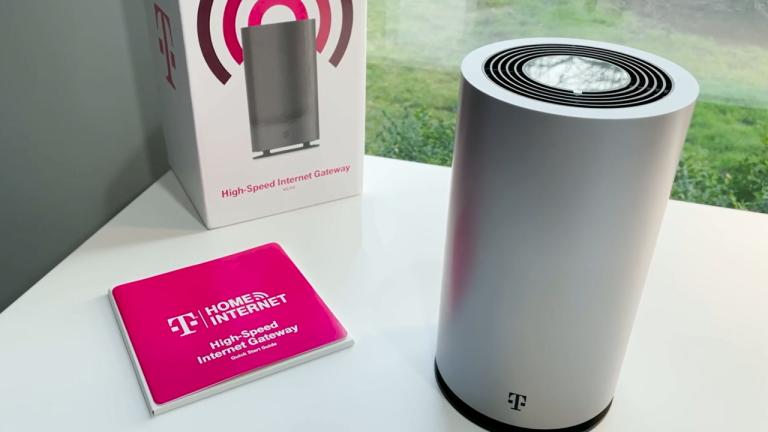 T-Mobile’s new 5G home broadband gateway/wireless router matters for one big reason: It’s an alternative to the cable monopolies that dominate most major markets in the United States. Whether it’s a better option than cable is, unfortunately, a question we can’t objectively answer, for two reasons.

First, what T-Mobile officially calls its T-Mobile High Speed Internet Gateway (5G21-12W-A) is “5G”—and the quality and bandwidth of the wireless signal you receive in your home will be dependent on any number of factors, the most significant of which will be the gateway’s distance from your nearest 5G cell tower. You’ll also need to balance what we found against what your own, competing broadband ISP delivers. Fortunately, T-Mobile’s plan offering is flexible enough that you can probably create your own one-month trial.

In my case, cable still regrettably offers the best option for my family of four, living in a house filled with streaming media devices and gaming laptops. T-Mobile’s 5G router offered enough bandwidth for about half of my family, but not quite enough for all four of us and our many devices.

To be fair, though, we never experienced all that the T-Mobile High Speed Internet Gateway has to offer. While T-Mobile labels my house as ”covered” by its 5G services, the reality wasn’t quite as simple.

T-Mobile’s router plan is all-inclusive: after confirming your eligibility, for $50 per month, T-Mobile will send you a pre-configured router with an activated SIM inserted. (The $50/mo actually includes a $10/mo AutoPay credit, so the actual price is $60/mo.) There’s no annual contract, either. If you decide the service isn’t for you, you can simply call T-Mobile, cancel, and the company will send you a prepaid label to box up and return the 5G21-12W-A hardware.

T-Mobile’s pricing is already on par or lower than even the cheapest cable contracts, and T-Mobile promises unlimited internet with no data caps or throttling to boot. Still, T-Mobile says that the service is “not intended for unattended use,” so don’t plan to download Linux distributions via BitTorrent.

Because of its coverage map, T-Mobile knows if your home will be close enough to a cell tower to receive a satisfactory signal. If you’re feeling really nerdy, however, you can visit a site like CellMapper.net and discover just how close the nearest cell tower is, and what wireless bands those towers use. 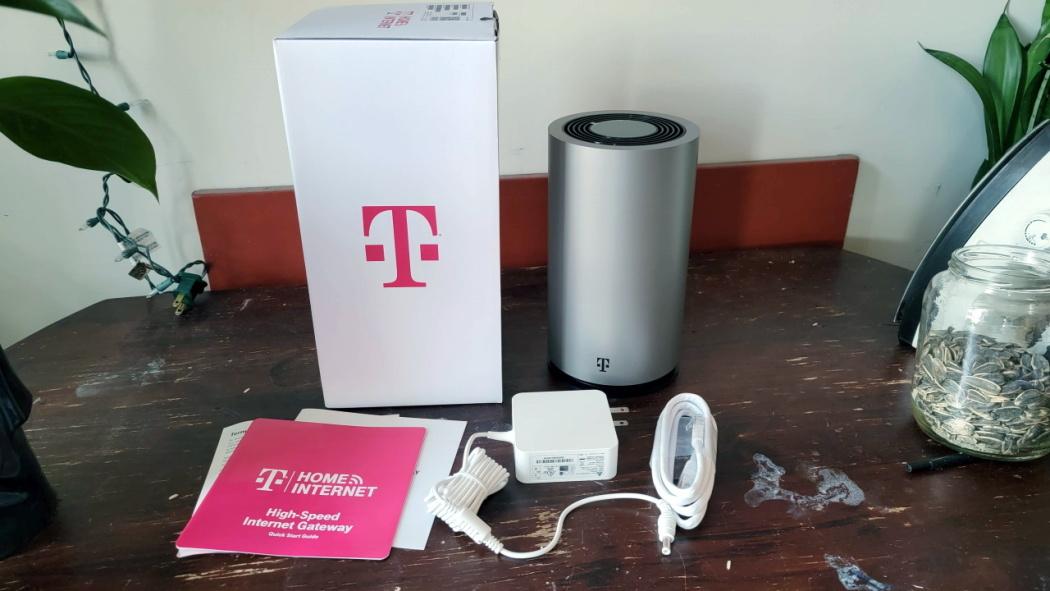 Physically, T-Mobile’s router reminds me of the Harman Kardon Invoke, a now-discontinued cylindrical smart speaker, that, like T-Mobile’s router, included a color display at the top. It measures 8.5 inches high by 4.75 inches in diameter, and is powered by a wall-wart-like plug with a conveniently lengthy six-foot cord. That’s handy, as you’ll want to position the gateway as close to an outside wall or window as possible to receive the maximum signal available. Inside is a Wi-Fi 6 (802.11ax) radio with four antennas to create the wireless network your client devices will connect to. You can also tap its dual gigabit ethernet ports for wired network connections.

T-Mobile’s gateway does have some quirks: There’s a USB-C port, a UPS port for an unterruptible power supply, and an RJ-11 telephone jack on the back of the router. but none of them are functional—at least as far as I could tell. I tried plugging a USB power supply in, but that didn’t work. I didn’t have a compatible UPS to test.

The 5G21-12W-A does have an internal battery, which allows the gateway to be used cable free—well, sort of. Setting up the router requires first turning it on, letting it boot up, and then walking it around the house or apartment to find the best signal. The LCD screen on top communicates this signal information in real time, though it will turn off after several seconds unless you tap it awake. You can also “swipe” through several screens, which tell you the number of devices connected, any service messages from T-Mobile, and more.

Here’s another quirk: While on battery, neither the ethernet nor the Wi-Fi connections can be used. That’s odd, since as I drove around my neighborhood with the 5G21-12W-A gateway to check signal strength, the battery level only dropped by a percentage point or two, meaning that it should realistically offer internet connectivity in case of a power outage. That’s simply not the case.

You might also think that a “wireless” gateway could be set up anywhere, unlike a wired cable gateway that can only be set up near the coaxial cable’s entry to the house. Unfortunately not. Typically, the ideal location will be near a window, one that isn’t partially blocked by a mesh screen. And location does matter, more than you might think: your wireless network must also be organized to take the gateway’s location into account.

While the 5G21-12W-A gateway reported that my house is bathed in a “weak” (2 out of 5 bars) signal throughout, I was only able to establish a “good” (3 out of 5 bars) signal in a corner of my son’s room, next to his window. And that, right in the middle of his Legos, became my new wireless gateway location!

Setup took just a minute or two, overseen by T-Mobile’s smartphone app. Once theusual niceties were completed—picking an administrator password, setting an SSID, and so on—the gateway was up and running. T-Mobile’s app offers a quick and easy dashboard displaying current signal strength, which devices are connected, and so on. The web interface (which, by default, can be accessed via http://192.168.12.1 while the gateway is connected) offers a lot more detail, albeit without much in the way of explanation for people less familiar with 5G and networking tech in general.

Performance and everyday use

I used T-Mobile’s 5G21-12W-A gateway for about three weeks, wirelessly connecting entertainment devices like the Xbox game console, plus my sons’ tablet and PC. Given how much they’re in use during summer vacation, I figured that they would be an excellent test of whether the T-Mobile signal remained constant. The signal dropped three times in that period, according to my kids—usually just a few seconds, but once for a bit longer.

I also tested the speed, of course. With all devices disconnected, speeds ranged from a maximum of 180Mbps to about 120Mbps downstream—again, on what T-Mobile’s app considered to be a “good” signal, or three out of five bars. Upstream speeds, which matter if you’re uploading video to YouTube or backing up files or photos to the cloud, reached just under 50Mbps, which is still much, much faster than the 14Mbps my cable provider, Comcast, offers, with its 400Mbps service plan. These tests were performed with a wireless client close to the router, with no other devices connected to the gateway.

My kids certainly didn’t report any issues while gaming or chatting with their friends via Zoom or Facebook Messenger, and they were able to download game updates normally. I also streamed 4K/60fps video from YouTube without problems. Finally, I re-ran my video-stream test while simultaneously performing a speed test and saw download speeds of 111Mbps, this while Windows updates were wirelessly downloaded to a different PC. The video stream dropped 102 frames out of 18,000—nothing noticeable. Google’s Stadia gaming service also reported a connection of 59Mbps (again, while streaming video) and approved the connection as a candidate for the service, though I didn’t try it.

It’s worth noting that my T-Mobile gateway was not connected to 5G. The T-Mobile app’s “More” tab will show you which frequency band your device connects to, which was typically Band 4 (defined by T-Mobile as a 4G LTE band). A cellular signal app on my 5G-capable T-Mobile phone also showed that the phone (not the router) occasionally connected to bands 2, 66, or 71—again, all 4G LTE bands. T-Mobile does operate 5G services on cell towers aligned along Bay Area interstates, but that tower was on the other side of town, and I doubt that the router ever connected to it. There’s no way of forcing the router to use a particular LTE or 5G band, either.