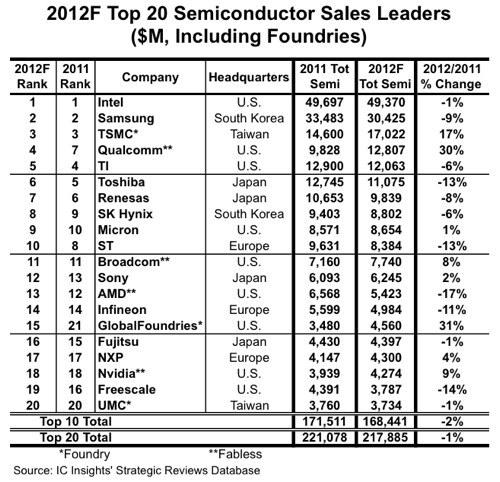 The other market research findings disclosed by IC Insights include:

Three pure-play foundries are expected to be in the top 20 ranking of leading semiconductor suppliers in 2012 (Figure 1). Combined, these three foundries are forecast to log a 16% increase in 2012/2011 sales, quite impressive considering the expected 2% decline in the worldwide semiconductor market this year. With the continued success of the fabless companies as well as the strong movement by many IDMs (Integrated Device Manufacturers like TI, Renesas, ST, etc.) to the fab-lite business model, IC Insights expects the IC foundries to witness very strong demand for their services over the next few years. 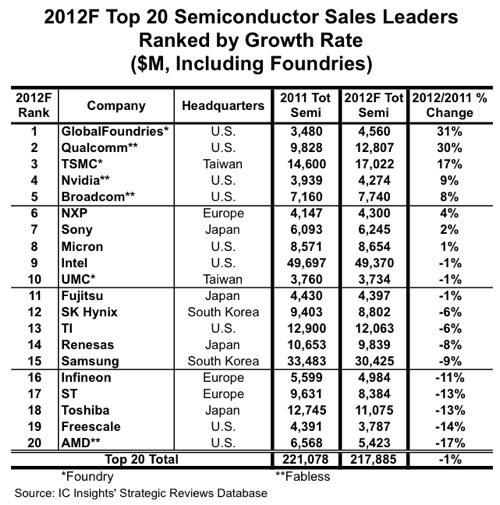 Sales from pure-play foundry GlobalFoundries are forecast to jump by a strong 31% while foundry giant TSMC is expected to show a healthy 17% increase this year. Considering that AMD, the original “parent” and largest customer of GlobalFoundries, is forecast to show a steep 17% sales decline this year, it is obvious that GlobalFoundries’ current spike in revenue is being driven mostly by its success in attracting new IC foundry customers (e.g., ST, Freescale, Qualcomm, etc.). As a result of its excellent performance this year, GlobalFoundries is forecast to replace Elpida and move into the top 20 ranking for the first time, rising from the 21st spot in 2011 to 15th place in 2012.

As shown in Figure 2, IC Insights expects there to be a wide range of growth rates among the worldwide top 20 semiconductor suppliers this year. It is interesting to note that despite the close on-going relationship between the two companies, GlobalFoundries (31% increase) and AMD (17% decline) are forecast to be the “bookends” on a 48-point growth range for the top 20 semiconductor suppliers in 2012.

The continued success of the fabless/foundry business model is evident when examining the top 20 semiconductor suppliers ranked by growth rate. As shown, the top five performers are expected to include three fabless companies (Qualcomm, Nvidia, and Broadcom) and two pure-play foundries (GlobalFoundries and TSMC).

Illustrating the very difficult year faced by the majority of the top 20 semiconductor suppliers, 12 of the top 20 ranked companies are forecast to register a sales decline this year, including 7 of the top 10 largest semiconductor suppliers in the world (#1 Intel, #2 Samsung, #4 TI, #6 Toshiba, #7 Renesas, #8 SK Hynix, and #10 ST). Of the eight top 20 semiconductor companies forecast to register a sales increase this year, five are headquartered in the U.S. and include GlobalFoundries, Qualcomm, Nvidia, Broadcom, and Micron.