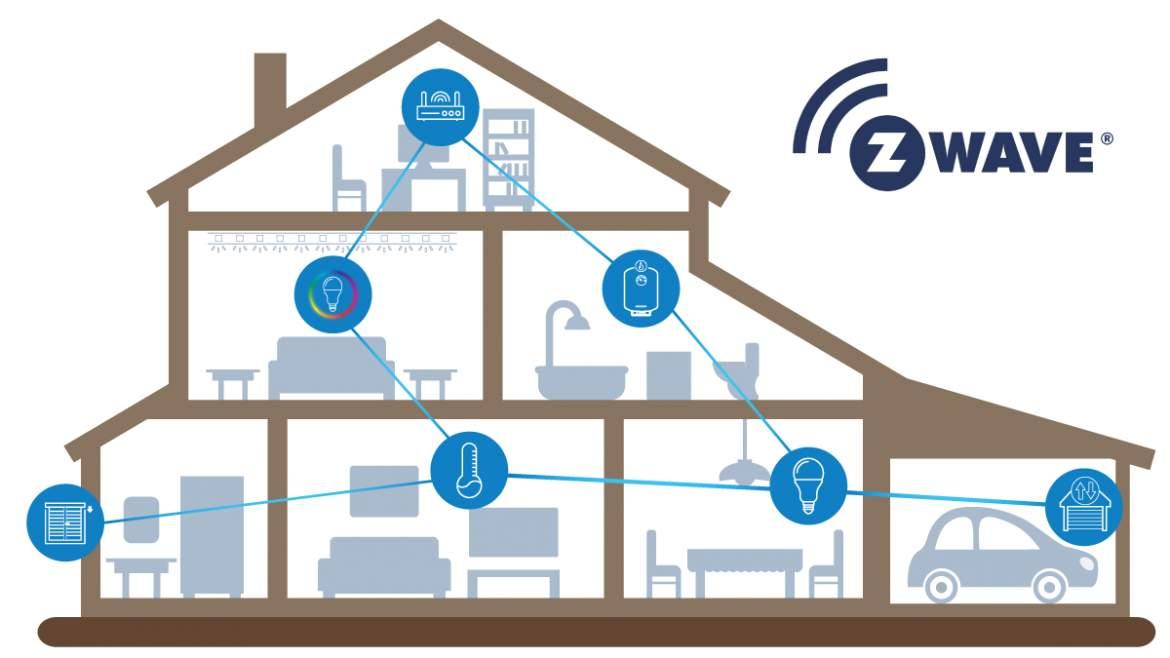 Today, home automation is more important than ever before. It changes and improves everyday life not only in luxury homes but everyday homes as well. Most end-users probably noticed the Z-Wave mark or logo on some electronic equipment in various smart home products. This article describes Z-Wave to the curious tenants of smart homes and others wondering about Z-Wave technology and its applications.

Interestingly, one of the first wireless protocols specifically dedicated to home automation was X10, released in 1975. It enabled wireless communication at 120 kHz via digital burst radio transmissions between home electronic devices, such as programmable switches and outlets. As one of the pioneer projects in wireless communications, X10 had significant limitations compared to modern solutions. In the beginning, it was a one-direction – simplex radio communication due to limitations of some home devices that were not capable of responding after the received command. Lately, the protocol evolved to provide duplex radio communication. Unfortunately, it’s an expensive solution. Other problems were connected to this wireless protocol, caused by circuits wired on different polarities that affected communication reliability and signal loss.

The increasing number of available smart home solutions at a reasonable price is the dominant catalyst of home automation’s further development and widespread deployment. At the same time, customers are becoming more technically demanding and evolve together with technology and the market. Nowadays, the accessibility of different wireless standards and protocols (like Bluetooth, ZigBee, Z-Wave, Wi-Fi, RFID, or NFC) under the influence of IoT technology evolved home automation to the new, higher levels.

Z-Wave is a proven wireless technology that evolved to a gold standard in smart home and home automation.Click To Tweet

In this process, the role of wireless communications is crucial for providing connectivity as the most important condition in automation establishment. By their nature, wireless communications technologies are mutually different and incompatible; they work on different frequencies, have different ranges and resistance to obstacles, or support different security mechanisms, etc. Let’s discuss the most important performances of Z-Wave technology in the smart home context.

What is Z-Wave Technology?

Danish company, Zensys, introduced Z-Wave in 1999 as a wireless technology dedicated to smart homes. The technology spread across the US starting in 2002. It has become a standard for home automation embedded within most smart devices like locks, plugs, heating controls, light bulbs, and varying sensors.

Z-Wave has a lower power supply consumption than other important wireless technologies, like Wi-Fi, but a higher range than well-known wireless standards, such as Bluetooth.

The continuously evolving technology model affected Z-Wave recently, resulting in an upgrade to the Z-Wave Plus standard (first known as Z-Wave 500). Z-Wave plus is enhanced with: 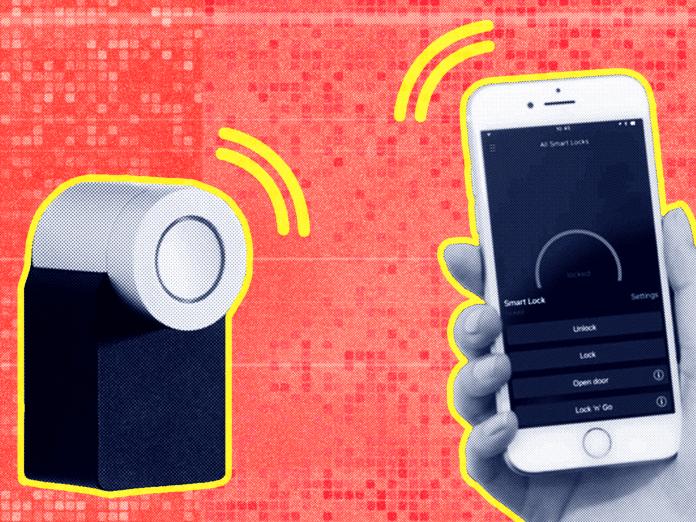 The majority of new devices are embedded with the latest Z-Wave Plus v2 standard, also known as 700 Series, or Gen7, enabling an improved S2 security framework and SmartStart. SmartStart is true plug-and-play support capable of making a smart device from any electronic appliance in your house. The latest Z-Wave 700 standard was introduced in 2019 but has yet to be widely deployed. It provides more energy-saving features, up to 10 years of battery life, superior memory and processing power, and a line of sight range extension to 200m.

The typical Z-Wave operating frequency ranges from 800MHz to 900MHz. Unlike many wireless technologies working in overcrowded 2.4GHz frequency bands such as Wi-Fi or ZigBee, Z-Wave is not sensitive to interference. The precise Z-Wave working frequency correlates with the radio frequency allocation plans in different countries. For example, the frequency can be 908.40 MHz, 908.42 MHz, 916 MHz in the US, 868.40 MHz, 868.42 MHz, and 869.85 MHz in the UK and Europe. Because of this, if someone from the US visits Europe and buys a Z-Wave device, it might not work in a US smart home.

The Z-wave wireless standard supports mesh topology, meaning it enables connectivity between devices in mutual range and extends the network coverage without the central hub that is a wireless access point or wireless router. It is important to notice that a central smart home hub’s role in Z-Wave networks is managing and administering all smart home devices. However, it does not provide an Internet connection like Wi-Fi networks. There are two types of devices in Z-Wave networks: Controllers or Masters and Slaves. Masters are generally Z-Wave central hubs, and the slaves are typically different sensors or other types of information generators.

The mesh network enables the signals to hop from device to device. In some cases, Z-Wave repeaters, such as different smart plugs, are used to extend wireless network coverage and send a signal from a distant Z-Wave node to the central smart home hub. Moreover, direct communication is enabled between the nodes that are not in direct range since the data can hop from device to device. A maximum of four hops is enabled between the nodes in the Z-Wave network. This is a necessary trade-off that has to consider the network size, stability, and the maximum time a message is allowed to be transferred within the network. Additional nodes in the network are strengthening its mesh structure and improve the network coverage, too.

Extending the network with new devices is a process known as inclusion. Z-Wave devices automatically detect the optimal routes for commands and messages, while passwords or SSIDs entering are unnecessary, like within Wi-Fi networks. Every Z-Wave network has its 32-bit identification (ID), also known as a Home ID. In addition, all devices within a Z-Wave network have their 8-bit Node ID. This ensures the separation between the neighboring Z-Wave networks within the smart homes and their fully independent functionality.

Theoretically, the Z-Wave mesh network supports 232 nodes – devices embedded with long-lasting batteries and have up to 100m range. The technology provides typical data throughput of 40kbps in 915 MHz and 20kbps in 868 MHz operating frequency. Undeniably, it is not optimized for full HD video streaming and online gaming, but it is optimized for wireless control and sensor applications.

Z-Wave Long Range networks, announced in September of 2020, are designed to increase the mesh structure to 2000 nodes, extend the network range 4 times, and support backward compatibility with standard Z-Wave networks.

Regarding security, this wireless technology is embedded with an AES-128 encryption solution, similar to other wireless standards (for example, ZigBee). It provides packet encryption, integrity protection, and device authentication services. It has an in-band network key exchange and AES symmetric block cipher algorithm using 128-bit key length. End-to-end security is enabled on the application level.

The Z-Wave Alliance established in 2005 is responsible for the management and administration of Z-Wave technology, its evolution, and the provisioning of complete backward interoperability between all Z-Wave products. It gathers more than 700 members and has been certified more than 3000 types of products that had to fulfill requests from demanding standards. Estimation is that more than 100 millionZ-wave products worldwide cover 70% of the smart home market.

Home automation setup based on Z-Wave technology is user-friendly and does not imply any prior technical knowledge of the end-users. Thanks to the support of mesh networking features, Z-Wave products can find each other automatically and work together with Amazon Echo or Google Home smart assistants. Moreover, Wink 2 and Samsung Smart Things are interoperable with Z-Wave technology. Some particular Z-wave hubs are available in the market, such as Aeotec Z-Wave Z-Stick, introduced by Aeon Labs, or the VERA Edge.

Its quality is recognized and accepted by prominent vendors like Danfoss, Fibaro, Aeotec, Homey, Ring, and Yale that developed thousands of certified solutions. The user-friendliness of Z-Wave technology encourages and motivates tenants to make smart choices and deploy smart products in their homes.