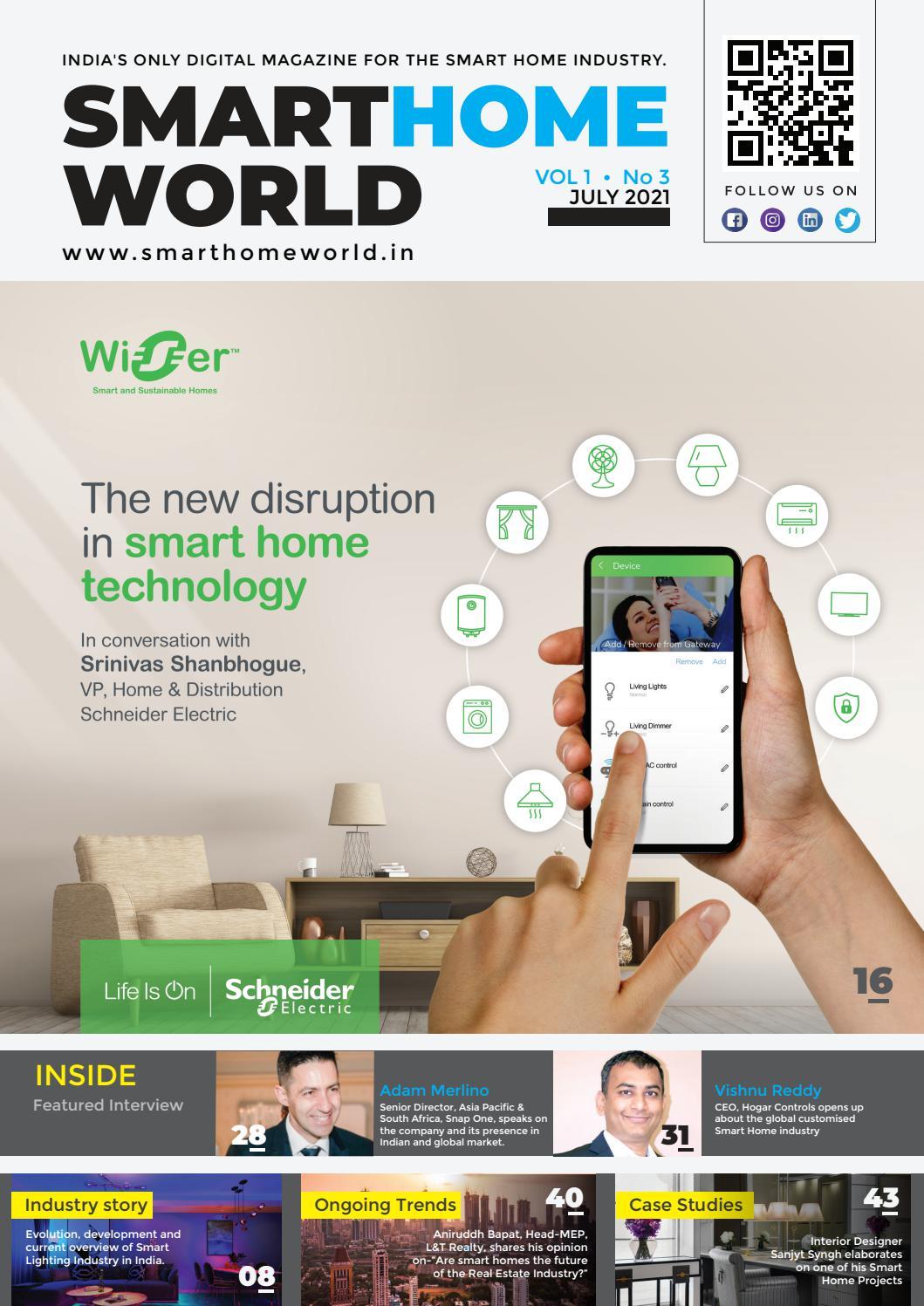 It’s been two years since I moved from my home in Austin to a rental home on Bainbridge Island outside of Seattle, and one year since I moved into my permanent home here. Which means I’ve had ample time to set up a new smart home infrastructure that will wow you with its awesomeness and functionality!

Except…I haven’t actually set up much of a smart home. Part of this stems from having spent so much of my time handling renovations amid the pandemic, but a larger part is the realization that most of my devices aren’t worth the time and trouble to implement. Before you think I’m about to dump on the smart home again, I need to clarify that I’m actually more in a holding period. More specifically, I think that by this time next year I will have a plethora of new gear on hand that works together more easily than it could now, thanks to the Matter protocol.

In the meantime, however, I have about 55 Wi-Fi devices on my network, roughly 30 of which are smart home-related. Some even entered my home thanks to the pandemic and the switch to everyone working from home, validating a trend that many analyst firms have highlighted. So let me show you what I’ve got so far.

Lighting – The most connected elements in my home are lights. I have a half-dozen Lutron switches in most of the main rooms, seven Philips Hue bulbs and bridges (plus a motion sensor), four Wyze bulbs, a Nanoleaf Essentials bulb, and two sets of Nanoleaf light panels. My husband has also set up three connected Elgato Key lights for his work-from-home camera setup that are tied into an Elgato Stream deck so he can hop on a video call and optimize his lights in one quick tap.

All of the lights are connected to Amazon and Google’s smart speakers for voice control and some automation. But my favorite two setups are the storeroom lights, which use Philips Hue bulbs and a motion sensor to turn on whenever the door is opened and off whenever motion goes undetected for more than five minutes, and a button that we use to turn the lights on or off in my teen’s bedroom to signal to her that we need her upstairs.

I also have two full-spectrum LEDs plugged into Wyze-connected outlets that are scheduled to turn on and off so I can light my plants during the winter.

Kitchen stuff – I swapped out my original June oven for the latest model. I still love it with all of my heart, although I wish I could connect it to Google so I could tell Google to preheat it (I can do this with Alexa, but my Echo is in my bedroom, so it’s not really useful). I have an old Lenovo Google Smart Display in the kitchen running through photos; we also use it for timers, weather, watching YouTube, playing music, and settling disputes. My fridge has Wi-Fi, but I haven’t connected it. I also have a connected sous vide cooker somewhere, but I haven’t pulled that out since we arrived. My Delta faucet has an Alexa capability, but I haven’t connected it because I don’t have an outlet by my sink and because I don’t have Alexa in my kitchen.

Living areas – The living room has three different versions of connected lights, so I have them all grouped to turn on as a unit if needed. I also have two Nest Audio speakers, which I loved until I discovered that they hate staying on my Wi-Fi network. Swapping routers didn’t fix the problem, so I now have to sporadically unplug them after they drop off the network for the hundredth time. My den downstairs has a second Google display that doesn’t see a lot of use, but is nice for dimming the lights for movie night and for blasting Spotify while we work out. There’s a Roku box that’s connected to what would be a smart TV if I connected it to the internet. And my den has a section of overhead lights connected to a Lutron switch.

I also have an Ecobee thermostat upstairs, but I need to shell out for a sensor to monitor the temp downstairs, which can vary by as much as eight degrees. I know this because I have two air quality monitoring sensors scattered around the house. One is the Awair Glow smart plug, and the other is the Airthings Wave Mini device. There’s also a connected Roomba vacuum we named Terrance, who as I type this is cleaning dog hair from my bedroom floor. 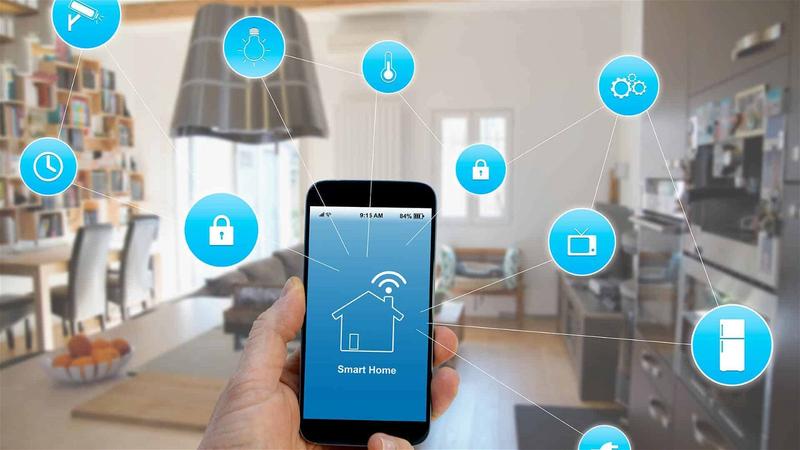 The boring stuff – As you might be able to tell from my collection of air quality monitors, I’ve gotten pretty into boring devices in the last year. One, called Ting, monitors electricity fluctuations in my home so it can warn me if it detects a fault that might lead to an electrical fire or other problem. Another, from Aquanta, monitors the temperature and electricity use of my water heater; it also has a leak detection sensor that lets me know if anything is going wrong. Finally, I have a Phyn leak monitoring device plugged into my upstairs guest bathroom that tracks water usage and any leaks in my home.

Security – I have too many doors in this house, four of them being patio-style sliding doors for which I can’t find connected locks. This makes me sad, as I really want to build a goodnight routine that locks all my doors and stops me from having to run all over the house checking them before I go to bed. I have three doors with traditional deadbolts and two of those have connected locks on them. My front door has the WiFi-enabled Schlage Encode, which is super handy, although I haven’t opened the app since my first install. The back door has a Z-wave lock from Kwikset that only gets used because it has a keypad. I dumped all of my Z-wave hubs earlier this year after throwing in the towel on Wink.

I also have a Ring mailbox sensor that is more of an annoyance than it is useful, a Eufy connected doorbell that we purchased because it was the best option that didn’t require a subscription, and a Chamberlain MyQ garage door opener that I love because we tend to leave the garage door open in this house more often than we did back in Austin. I also have a door in the garage that leads to the outside (so I suppose that’s eight doors!) that I’d like to get a smart lock on, but I’m waiting for some Matter-certified locks to hit the market next year.

I have a Wyze cam and two Arlo cameras that I put out when we leave town or I am trying to monitor something weird in the yard, but those are only intermittently on my network.

Outside – I have a Lutron outdoor plug that controls some Christmas lights, and I’m waiting eagerly for the Orbit B-hyve faucet controller to arrive so I can hook it up and create a good watering schedule for my garden. I also need to get a septic monitoring device as part of my boring IoT gear, but have been dragging my feet on that.

Bedrooms – Speaking of sleeping, our bedrooms have connected light bulbs or switches depending on whether there are overhead lights or not. My bedroom and my daughter’s bedroom each have Amazon Echo devices, with mine being the latest fourth-generation Echo and my daughter using the original 2014 Pringles that I purchased as part of the original Echo beta. I can’t believe it still works! My daughter also has a smart outlet from Wyze that controls her fairy lights using voice.

If I look at all the smart gear in my home, it mostly falls into the convenience or entertainment categories, and few things — other than the June oven or the boring elements monitoring my home — are truly smart. This list doesn’t include my various wearables or Bluetooth-enabled sensors, exercise gear, or trinkets that are also scattered around the home. For 90% of these devices, once they are set up, I never use the apps, preferring to use automation, voice, or physical buttons to control them.

I no longer spend an hour or so each week futzing with smart hubs and different radio protocols, which is nice, but I also admit that the smart home I have is pretty far off from the smart home of my dreams. I’ll check back in a year or two post-Matter and let you know where I’m at then.

Want the latest IoT news and analysis? Get my newsletter in your inbox every Friday.