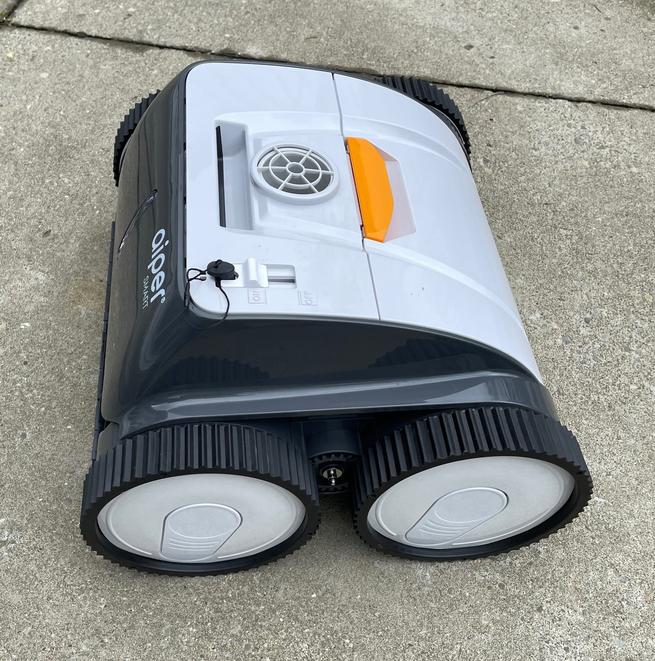 REVIEW – Avast! There be a monster lurking beneath the surface! No, it’s not there to eat the boat, wrap its tentacles around Captain Jack Sparrow, or swallow Jonah. It’s here to clean! My mom is 81 and lives an hour away, but I’m her “pool guy,” so I was excited to review Aiper Smart’s AIPURY1500 Pool Cleaning robot to see how well it does in keeping Mom’s summer sanctuary spotless…

What’s in the Box?

Aiper Smart’s flagship pool cleaning robot arrived well packaged. After unboxing, the robot needs several hours to fully replenish its batteries which can propel it on its merry way for 90 minutes. An LED on the wall charger indicates charging status changing from red to green upon completion. 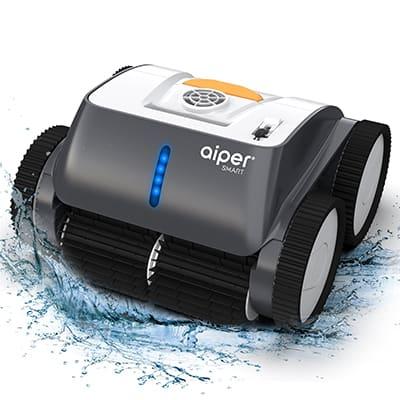 The power connector is keyed so the charge plug only goes on one way. When in use, a rubber blank (attached to the robot by a short tether) keeps the charge socket dry. There is a slot in the power switch that locks the plug in place so it won’t loosen during use.

Operating the pool cleaning robot is very easy – turn on the switch, at the pool’s rim, hold the robot underwater for 20 seconds to burp out the air, then let it go.

On the day I tested the robot, I had intended on uncovering my Mom’s pool. Unfortunately, the air temperature was only 46°, so we elected to wait for another day. As an alternative, we partially uncovered the pool and let the robot have a go at the first cleaning of the year – a challenge it was more than willing to undertake!

Those with pools will understand the feeling of mystery experienced popping the cover off in the spring – Will the water look cloudy? How much dirt managed to squeeze under the cover? Will there be a lot of dead bugs?Peeling back the cover, we were very pleased that we could see the bottom of the pool and thought it looked very clean. Wow, we were wrong!

As we lowered the Aiper Smart AIPURY1500 pool cleaning robot into the pool, I was impressed at the amount of suction produced by the cleaning motor. The robot was able to firmly hold itself on the pool walls and when on the bottom, the jet of water coming from the robot’s body pushed a pronounced flow to the top of the pool in four-foot deep water. Very impressive!

The first pass across the pool floor left a remarkably clean path.

Sediment that was too fine to be collected in the robot’s filter was launched into the water. This is great because these waterborne particles will be captured by the pool skimmers and pass into the pool filtration system. Larger stuff like bugs, leaves, and sand were easily captured by the filter.

The pool cleaning robot’s four-wheel drive and intelligent navigation system slowly and methodically puttered along the pool bottom and nimbly, yet firmly climbed the walls, scrubbing along as it went, everywhere leaving a conspicuously cleaned pathway.

When the battery is depleted, the Aiper Smart AIPURY1500 parks itself along a wall. Retrieving the robot is easy using the included hook which attaches to a common pool net or vacuum pole. My Mom will be able to pull the robot from its resting place to the shallow end of the pool where she can pull it from the depths. It’s relatively heavy, but not overwhelmingly so.

Cleaning the robot’s filter was also amazingly easy and took less than a minute– open the door, snap open the filter, dump out the heavy stuff, then rinse the mesh with a garden hose. Voila!

What I Would Change:

The initial test results of the Aiper Smart AIPURY1500 Cordless Pool Cleaning robot were very impressive and the robot should save dozens of summer hours that were once used for pool vacuuming. Once the weather cooperates and we can fully open for the season, I do not doubt that the Aiper 1500 will be a great tool for keeping my Mom’s pool pristine!

Price: $1298.99 Where to buy: Aiper Smart and Amazon Source: Sample for this review was provided by Aiper Smart.