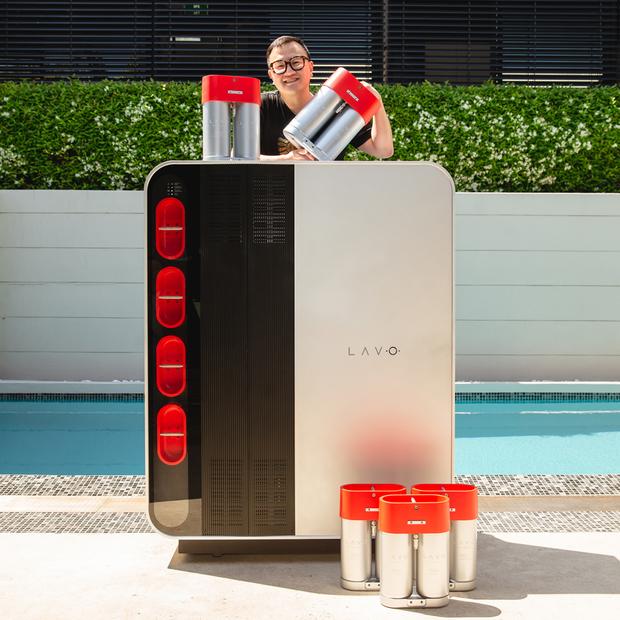 A novel project in Australia aims to harness the sun’s energy in two different ways: by storing it and by using it to produce green hydrogen.

Dozens of solar farms in the country’s southeastern region are slated to use “hydrogen batteries” in coming years. The dual-purpose devices can fit inside of shipping containers and pack a bounty of technologies: lithium batteries, electrolyzers, fuel cells, and canisters of a hydrogen-metal compound. Operators can use the systems to store energy from solar panels and deliver power to the grid during cloudy days or at night. Or, they can supply the green hydrogen to other industries, such as cargo shipping and steel production.

At least that’s the vision Alan Yu and his partners share. Yu is CEO of Lavo, the Sydney-based company that makes hydrogen storage systems for utility and residential markets. He’s also co-founder of the investment firm Providence Asset Group, which is developing solar power projects in the states of Victoria and New South Wales.

In early July, Providence Asset Group signed an agreement to sell output from more than 30 of its solar farms to SmartestEnergy Australia, a retail energy provider that’s owned by the Japanese conglomerate Marubeni. Eleven of the solar projects are fully operational and the rest are expected to be up and running by early 2023. All together they’ll represent a 300-megawatt solar installation.

Meanwhile, Lavo plans to commence work on its first utility-scale trial unit by the end of this year. Each hydrogen battery system—which it dubs HEOS—will provide about 13 megawatt-hours of storage at the solar sites.

The initiative comes as the global electricity sector is clamoring for grid-storage solutions. The rise of intermittent renewables like solar and wind is driving a need for systems that can absorb excess power supplies and discharge them at a moment’s notice, to match the ebb and flow of power demand. By 2030, the global energy storage market could see a five-fold increase, from 800 gigawatt-hours today to as much as 4,000 gigawatt-hours, according to the U.S. National Renewable Energy Laboratory. (The figures include both stationary storage installations and transportation applications, such as electric vehicle batteries.) 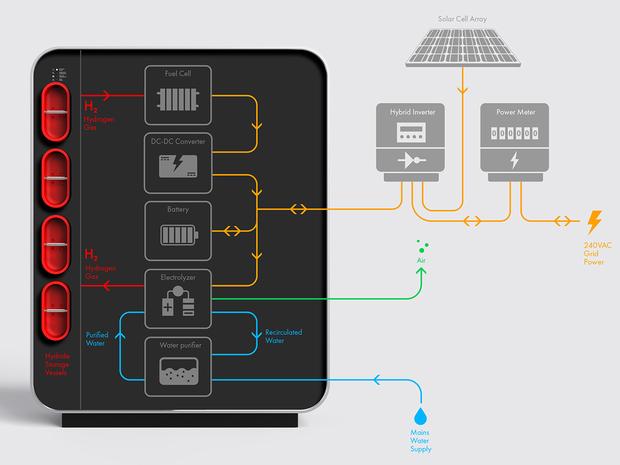 At the same time, green hydrogen is gaining favor as a way to clean up long-distance transportation, chemical manufacturing, aviation, and other sectors that are difficult to electrify. Estimates for green hydrogen growth vary widely, and there’s little consensus as to what demand might look like in coming decades, Canary Media recently reported. However, the Hydrogen Council said it expects green hydrogen production to reach nearly 550 million metric tons by 2050—a significant jump from the roughly 0.36 million metric tons produced in 2019.

The system builds on years of research at the University of New South Wales, which patented the hydrogen-metal compound—or metal hydride—technology in 2019. Here’s how it works: Solar panels feed electricity into the unit and charge a 5 kilowatt-hour lithium battery. Once the battery is fully charged, any additional electricity runs through an electrolyzer, which splits water into hydrogen and oxygen. The oxygen is released into the air, while the hydrogen flows into the metal canisters. Inside the red-top tubes, hydrogen is stored in a solid form by combining it with a fibrous metal alloy made from common minerals.

“Our long-duration storage can act as a solar sponge to absorb...to reduce pressure and add stability to the grid,” Yu said.

The system also works in reverse, converting the solid metal hydride back into hydrogen, which then runs through a fuel cell and supplies electricity to the grid. Yu said the systems can deliver more than 20,000 charge cycles, giving the components an expected lifetime of 30 years—about as long as a solar farm lasts. Alternately, the metal hydride canisters can be plucked out of the system and placed on a truck or cargo ship for export.

Stored at room temperature and low pressures, the canisters are safer and easier to transport than hydrogen that’s stored in pressurized tanks or converted into ammonia, according to Kondo-Francois Aguey-Zinsou, who has worked on the Lavo technology and leads the university’s Hydrogen Energy Research Center in Sydney.

Lavo began testing its first prototype at the research center last year. That unit is smaller than the ones that will operate at solar farms; instead of a shipping container, it’s about the size of a double-door refrigerator. The technology firm has started marketing its more compact version for use in homes and businesses. With a storage capacity of about 40 kilowatt-hours, it purportedly stores three times as much energy as Tesla’s Powerwall 2.

Yu said Lavo initially planned to commercialize its utility-scale units first. But manufacturing delays and other disruptions due to the Covid-19 outbreak spurred Lavo to pivot its focus to the home storage market. As the company fills orders for the fridge-sized systems, it will also be developing the larger hydrogen batteries to roll out alongside solar farms in southeastern Australia.