iRobot Roomba i3+ review: A bumbling robot that leaves your floor spotless 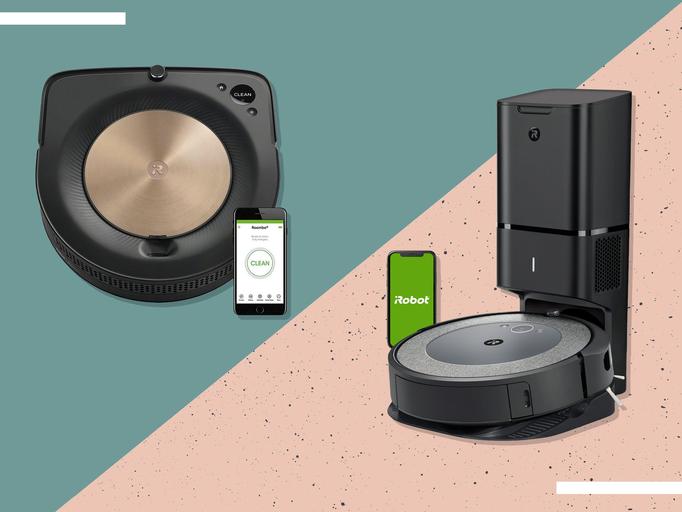 Roomba has become a household name among robot vacuum cleaners, and with the Roomba i3+ it’s easy to see why. This robot bumbles its way around your house looking for all intents and purposes like it doesn’t know what it’s doing, bumping into furniture, turning back on itself and going over the same spots twice.

However, while the erratic behaviour and relatively simple app make it look like it doesn’t know what it’s doing, it’s actually busy doing one of the best and most thorough cleaning jobs that you can get for the price. The icing on the cake is that the “plus” in the i3+ model name refers to its base station, which empties the robot’s collection bin after it’s finished its cleaning routine so you don’t have to.

iRobot Roomba i3+ review: What do you get for the money?

While the Roomba i3+ itself comes in a box the size of a briefcase, the Roomba i3+ comes in a much larger package. This is thanks to the Clean Base unit, which measures a bulky 308 x 378 x 482mm (WDH). This operates as the charging station and also empties the i3+ when it’s finished cleaning.

The first question you’re likely to ask yourself when unpacking this behemoth is where you’re going to put it. It needs to be in reach of a plug and have plenty of space around it to help the i3+ find its way home. It’s made of matt black plastic, so won’t exactly blend in with most home decor.

The robot vacuum itself is more compact. It’s puck-shaped, like most robot vacuums, with a diameter of 337mm, and has an attractive, dark grey, textured plastic case. It has a small sensor unit sticking out of the top, which gives it a total height of 92mm, and further inboard is a trio of buttons: a clean/power button flanked by spot clean and home buttons on either side.

It’s low enough to fit under most furniture, including the low shelf on my coffee table that’s proved impassable to some taller robots. It didn’t quite slip into the gap below my TV stand, however, which only the very slimmest vacuums – the Eufy RoboVac G30 Edge, for instance – can access.

Flip over the robot and you’ll see that the Roomba i3+ employs an unusual combination of brushes. Instead of a single roller, there are two, and these rotate towards each other, scooping up dirt rather than simply agitating the surface and relying on suction. And instead of brushes, they’re sleeved in rubber jackets, which use flexible fins and ridges in place of brushes. There’s also a single, rotating edge-sweeper brush on the right-hand side to scoop detritus into the path of the main rollers.

The package comes with two filters (one installed and one spare) and two bags for the Clean Base (also one installed and one spare). After that, if you buy bags direct from iRobot, they’ll cost an eye-watering £22 for three, although with up to 60 days’ cleaning per bag, that should be a six-month supply. If you don’t mind third-party replacements, there are cheaper alternatives widely available, which can get the price of a bag down to around £2.50 each if you buy in bulk.

READ NEXT: Remove stains with the best carpet cleaner

iRobot Roomba i3+ review: What’s it like to use?

Setting up the station is as simple as taking it out of the box and plugging it in. Charging the Roomba i3+ takes around three hours, however, so that gives you plenty of time to download the iRobot Home app on your Apple or Android smartphone and get familiar with it.

The app is a relatively simple affair because the features on the Roomba i3+ are limited compared with many robot vacuum cleaners. To set it off on its first clean you simply tap the Vacuum Everywhere button. 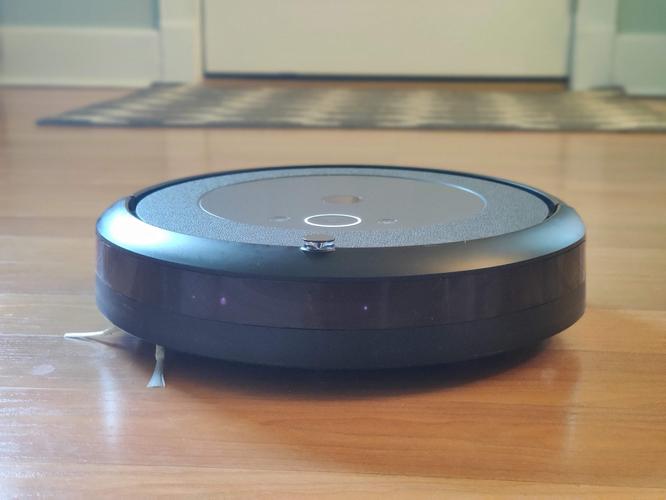 This sends the robot off on a cleaning mission that should cover every piece of floor it can reach, so it’s essential to do a quick lap to make sure any wires, toys, newspapers or pets are out of the way. It’s also possible to use your voice assistant to kick off cleaning, with both Google Assistant and Amazon Alexa supported, though the commands are limited to starting and stopping a clean, and sending the Roomba back to its dock.

That’s really it when it comes to settings and controls. In fact, the only thing you can manage yourself is scheduling. This lets you set a start time and what days you’d like it to happen, though you can also set it to start whenever your smartphone leaves the house. The only thing you have to worry about is keeping the floor clear. The Roomba’s website suggests that it will also suggest an extra clean when your local pollen count is high or your pets are likely to be shedding hair, but that didn’t occur during the time we were testing it.

iRobot Roomba i3+ review: Is it good at finding its way around?

The Roomba i3+ doesn’t use sophisticated laser scanning to build up a map so it’s actually quite poor at finding its way around. It does this methodically, though, cleaning in straight lines, and turning when it bumps into furniture or walls. And although the bumper on the i3+ is made of hard plastic, it’s mounted on a spring mechanism, so the robot can detect an impact before it does any damage. It also uses internal sensors, such as gyroscopes, to stop it getting stuck on things.

I didn’t particularly notice it attacking things like wooden chair legs with much force, but if your furniture is delicate or valuable you might want to consider a robot with better collision detection. It also doesn’t seem to remember the position of basic obstacles, even while on the same run, doubling back and bumping into table legs that it had just navigated around. However, it does remember where it’s been, so it’s not randomly cleaning the same spots twice (unless it’s really dirty, which might trigger its Dirt Detect sensors and send it back for a second pass). If it runs out of battery halfway through a clean, it will resume where it left off.

Unlike robots with more sophisticated navigation, such as the Ecovacs Deebot N8+ or the Dyson 360 Heurist, the Roomba i3+ doesn’t store a map of your house, even after it has completed its first clean. This means you can’t use the app to designate no-go areas or to tell the vacuum to head to particular rooms for special treatment.

And because it recreates its map each time, it’s less efficient. I tested the robot over 57m² of a household floor and it took 1hr 15mins to complete. The Ecovacs Deebot N8+, which stores a map of the area, can cover the same ground in just over an hour. It’s a speedier cleaner than the Dyson 360 Heurist, however, which took around 21 minutes to clean an area around a sixth the size.

READ NEXT: The bets mop to buy

iRobot Roomba i3+ review: How well does it clean?

Unlike most manufacturers, iRobot doesn’t quote the suction power of the Roomba i3+, only stating that it’s ten times more powerful than the Roomba 600, whatever that means. It’s possible the power might not be as high as some other vacuums and iRobot wants to hide it, but suction power is irrelevant if it doesn’t clean well.

You can’t steer the Roomba to a spillage but it does have a spot-cleaning mode, which you can access by simply pressing a button on the top of the robot. Pick up the robot, plonk it down in the centre of your mess and press the button. The robot circles the area in a spiral that eventually reaches about one metre in diameter, then it circles back in again to where it started.

I tested this spot-cleaning mode by scattering measured amounts of flour and rice on both short-pile carpet and hard floor, and it performed well. On hard floor it was particularly good, gathering up 46g of a 50g flour spillage, and 48g of rice. Most of what wasn’t collected was scattered beyond the reach of the vacuum in the initial stages of the clean by the edge-sweeping brush, which is a common problem among robots that have these attachments.

Rice spilled on short-pile carpet was just as effectively cleared, with 48g disappearing into the vacuum with the remainder scattered beyond reach by the edge-sweeper. It wasn’t quite so successful at clearing flour from carpet, however. Of our 50g spillage, the Roobma i3+ gathered up 40g, with a significant residue left behind.

If you compare these results to other robot vacuums, it’s a glowing report. It isn’t as effective as the Dyson 360 Heurist at debris pickup but it’s a significantly better cleaner than the Ecovacs Deebot N8+. The Eufy RoboVac G30 Edge came closer in our tests, but still left more flour behind in the carpet.

When it came to self emptying, we were even more impressed. Having been disappointed by the self-emptying Deebot N8+, which left dusty debris behind in the collection bin and was generally unsatisfactory – the emptying performed by the Roomba i3+ was almost faultless. I tried catching it out with larger pieces of debris, along with a house-worth of dust and dirt, and it swallowed it all up. The only thing it didn’t clear was the occasional spec of grit, although I suspect these would be gathered and dislodged in subsequent emptyings.

READ NEXT: Clean out the dirt with the best carpet shampoo

iRobot Roomba i3+ review: Should I buy it?

If you want a robot that cleans effectively and delivers on its promise to empty itself, the iRobot Roomba i3+ hits the spot. The app lets you set up a cleaning schedule to your taste, and the robot will get on with the job while you’re not looking. Sitting at the bottom of the Roomba ‘i’ range, the Roomba i3+ isn’t the most intelligent model at finding its way around your house, but it gets there in the end.

The only robot we’ve tested that performs better than the Roomba i3+ is the Dyson 360 Heurist but, at £899, it’s far more expensive and you have to deal with emptying its collection bin every two or three cleans. If you want a self-emptying alternative, you could opt for the Ecovacs Deebot N8+, which is a little cheaper, but we found it to be less effective at both cleaning and emptying.

For a more affordable robot vacuum cleaner, for those who don’t mind emptying the bin after every clean, the Eufy RoboVac G30 Edge is a steal at £339. It bumbles around mapless, like the i3+, but does a reasonable job at clearing up mess.