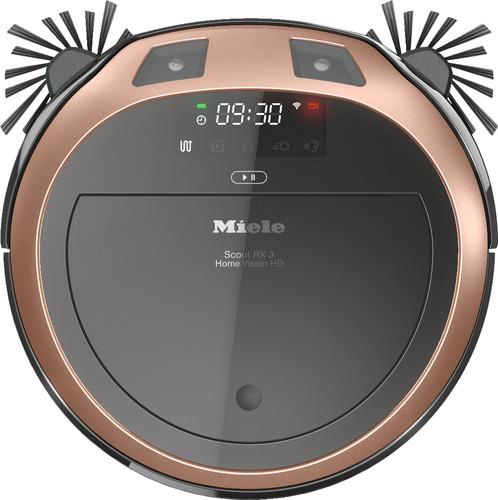 Featauring twin cameras, the Miele Scout RX3 Home Vision HD lets you see what’s going on in your home; but the system feels like a gimmick, particularly since the cameras aren’t used to automatically avoid obstacles.

Mapping is improved with this model compared to the original, offering two slots – but issues remain. In particular, if there’s a fault, the manual recommends turning the robot off and on again, which wipes out progress. My robot also had some problems docking, until I put a wedge under one end of the dock to adjust the angle.

Cleaning performance is great, but there are cheaper robots that clean as well and are better to use. A new app update could dramatically change the experience.

It’s been more than two years since we’ve seen a new robot vacuum cleaner from Miele, and a lot has changed in that time. With the Miele Scout RX3 Home Vision HD, the company is promising a better app experience and deeper cleaning, while retaining the video cameras of the previous model, so you can see where and what your robot is up to.

Cleaning performance, particularly at the edges, is excellent. However, the app and robot have quite annoying traits that get in the way.

There are two versions of the Miele Scout RX3, the standard version and the Home Vision HD that I have on review here. The Home Vision version offers better battery life, plus two cameras on the front that let you stream the live feed to your smartphone.

That’s similar to the older Miele Scout RX2 Home Vision, although the new model ups the resolution of the camera. It isn’t that big a difference, and the quality of your Wi-Fi and speed of internet connection can impact image quality. In my experience, I had a clear view of what was going on and could use the view to steer the Scout RX3 where I wanted it using the app; but having viewed the robot a few times, this mode soon lost its attraction.

Surprisingly, the cameras aren’t used for object detection and avoidance, as they are on the Roborock S6 MaxV or iRobot Roomba J7+ – which feels like a missed opportunity.

Although the Miele Scout RX3 Home Vision HD sports a similar design to much of the competition, it features a rose gold trim around its edge, which makes this robot vacuum stand out in a good way.

On its underside, the robot is a little different to rival cleaners. There’s the standard brush bar in the middle, but behind it is a secondary slot for picking up loose dirt. Rather than a single side-sweeper, the Scout RX3 has two massive brushes instead. The idea is that they sweep more dirt into the main suction path.

On the top, the Scout RX3 has a flip-up lid that reveals the cleaning brush and a 0.4-litre bin. Pull up the handle, and that bin gently lifts out for easy emptying and access to the filter. Miele recommends changing this filter twice a year (replacements cost £16.29), although I usually have success by vacuuming the filter out to extend its life.

Once connected to the dock and turned on, the Miele Scout RX3 Home Vision HD’s LCD springs to life. It shows you the date and time (although getting the robot in a position where this is useful is hard), plus there are shortcut keys for starting a clean, returning to dock, spot-cleaning and to turn off sounds.

Surprisingly, in this day and age, Miele provides a remote control with the robot. It lets you start a clean, set cleaning times via the LCD, return to dock, or street the robot manually. It’s far better to use the app in my opinion, and once I’d used the remote once, I found that it went in a drawer and I didn’t miss it once. 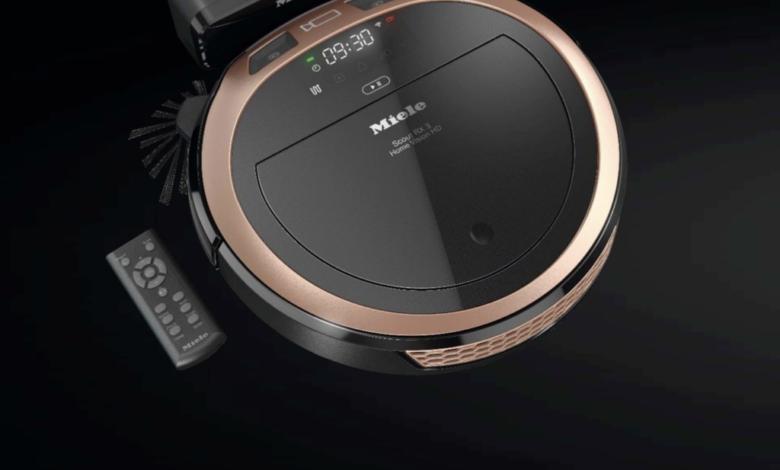 Via the Miele Scout app, you can connect the robot to your Wi-Fi network and control it via your smartphone. The first job is to get the Miele Scout RX3 Home Vision HD to complete a cleaning run, so that it can build a map of your home. You can save up to two maps, making it suitable for a home with two floors; if your home’s on more floors than this, you’ll want to consider rival cleaners: the iRobot i7+ can store up to 10 maps. For each map, you can draw areas (rooms), which you can use later, and no-go zones. Miele lacks the automatic room detection of much of the competition.

From the app, you can start a clean to go everywhere, or you can use the option to clean only specific areas, as marked on the map. You can also schedule cleans if you want the robot to run with a degree of autonomy.

There’s no option to adjust the robot’s power, but there’s an option to increase suction power on carpets, plus different cleaning modes aside from the default Auto mode. Spot-cleaning lets you move the robot to a specific place and then have it clean around it; Turbo switches to max power – so the RX3 cleans faster; Silent reduces power to extend battery life and run at a lower volume.

If you want voice control, there’s only Amazon Alexa support, not Google Assistant. The voice commands are a little strange, as you have to tell Alexa to turn the robot on to start a clean and turn it off to have it return to dock.

My initial problem with the Miele Scout RX3 Home Vision HD was that it wouldn’t sit on the dock properly to charge. I had to press down slightly on one side of the robot to get it to make proper contact. Even after this, the docking problem continued at the end of a clean, with the robot moving in and out of the dock, before it eventually ran out of power. Given that this was the first run, the lack of power meant that my map wasn’t saved.

I tried moving the dock, in case the slightly uneven floor (not a problem with any other robot I’ve tested, mind) was the problem. Again, I had a few problems with the robot unable to dock, which led to another big issue: dealing with faults.

Trying to get the robot to stay on the dock, I triggered a fault: “Drive wheels overloaded”. “Please check wheels and confirm” said the app, so I hit the big tick in the app, only for the robot to beep and flash up an “F 4” error on-screen.

There weren’t any buttons on the vacuum itself, nor anything in the app, that could clear this error. The Miele Scout RX3 Home Vision HD’s manual suggested that with faults, you should use the physical power switch to shut the robot down. Doing this clears the fault; but it also stopped the map from being saved.

Finally, I put a small wedge under one end of the dock, after which the Miele Scout RX3 Home Vision HD behaved itself, docking as it should and letting me create the map.

On to the proper cleaning tests, I started by sprinkling an “X” of flour onto my test carpet. On its first run through the the mess, the Scout RX3 managed to get the outer bits of the “X” but the dirtier inside was partially left behind.

Running the cleaner for a second time achieved better results, although there were still small traces of dirt left behind. Still, given that most cleaning runs will have to deal with less mess than this, the result is impressive.

Moving to the hard floor, I sprinkled a teaspoon of flour at the centre of the floor. Here, a single pass was all that was required to pick up everything.

With dirt spread to the edge of the kitchen plinth, the initial run wasn’t that successful: the robot swirled the mess around, but left a fair bit of it behind.

However, a second pass cleared it all. That’s hugely impressive, and the best result I’ve seen in a long time: the iRobot Roomba J7+ is a good robot vacuum cleaner, but its two passes still didn’t do so well on room edges.

Miele quotes battery life at up to two hours, but the mode in which the vacuum cleaner runs will affect this. Starting with a full battery and letting the vacuum cleaner make two passes of a 22m2 room, the Miele Scout RX3 Home Vision HD pretty much wiped out its battery. Most of this was on carpet, which uses more power, so I’d only be able to cover an area around 44m2 from of a charge, assuming a single pass. In other words, that’s around a floor of your average home.

In terms of noise, I measured the robot at a quiet 65.7dB – that’s loud enough to hear, but far from intrusive or distracting.

If you want solid cleaning performance right into the edges of your rooms, the Miele Scout RX3 Home Vision HD robot vacuum is a great choice.

If you want Google Assistant support, or a more intuitive way to use your robot, then the competition is better.

A mixed bag, the Miele Scout RX3 Home Vision HD manages to clean brilliantly, even getting right into the edges of rooms – but the interface leaves a lot to be desired. In particular, faults require the robot to be turned off and back on, which can wipe map progress. My robot also didn’t want to dock, and I had to place a wedge beneath the charging dock to get the RX3 to park.

This is an expensive robot vacuum, and for the same money you can buy the iRobot Roomba J7+, which offers a far better interface and it will self-empty, too. Check out further options in my guide to the best robot vacuum cleaners.

News, competitions and exclusive offers direct to your inbox.Terms and conditions

Unlike other sites, we test every robot vacuum cleaner we review thoroughly over an extended period of time. We use industry standard tests to compare features properly. We’ll always tell you what we find. We never, ever, accept money to review a product.

Find out more about how we test in our ethics policy.

Used as our main robot vacuum cleaner for the review period

We test for at least a week

What do the cameras on the Miele Scout RX3 Home Vision HD do?

These cameras let you view the live stream, so you can see where the robot is and control it.

It supports Amazon Alexa only; there’s no Google Assistant support.

Yes, the robot can store up to two maps.