Amazon Smart Thermostat vs Nest Learning Thermostat: which is best for your home? 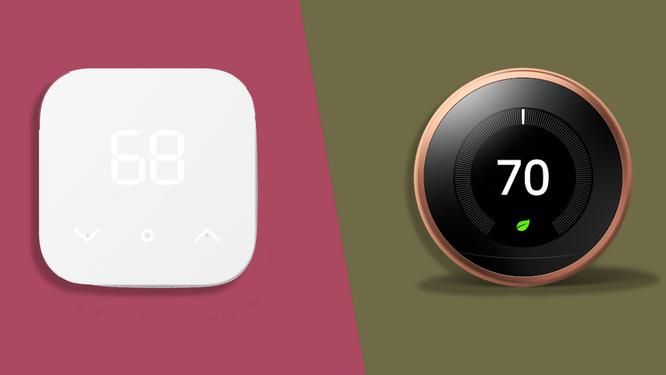 Being able to control the heating and cooling of your home from your smartphone even when you're not around, is something that’s been possible for more than a decade. Smart Thermostats may be some of the more expensive smart home devices on the market, but as they enable you to save energy (and subsequently money) as well as making life easier, the investment is certainly worth it.

In that time, Google has established itself as the market leader, with the Nest Learning Thermostat. Now in its third generation, the Nest combines heating and cooling control with smart home integration and artificial intelligence designed to lower your home energy bills, but it doesn’t come cheap.

Although popular, Nest’s smart thermostats are among the most expensive on offer today. While the company’s newer but simpler (and less intelligent) thermostat is priced at between $100 and $130 depending on whether there’s a sale on, the Learning Thermostat is $249 (or $450 for two).

Meanwhile, the Amazon Smart Thermostat is just $60. That’s a huge difference whichever way you cut it, and means it shouldn’t be long until the device has paid for itself by lowering your home energy bills.

It is worth quickly noting that, while the Nest is available internationally, the Amazon thermostat is currently (as of February 2022) only available in the US. Amazon tends to make smart home products more widely available if they are a proven success in its native market first, as was the case with the first Echo smart speakers.

As for installation costs, both thermostats can be installed by a competent DIYer. However, the wiring of your home will dictate whether a C-wire, which gives the thermostat its own power supply, is needed. If required, this will mean extra work and potentially the need to hire a professional to complete the installation.

Hiring a professional is likely to cost in the region of $100, regardless of which smart thermostat you choose. Your local electrician might charge slightly less, while BestBuy’s The Geek Squad charges $130 to install any brand of smart thermostat, including smartphone setup. 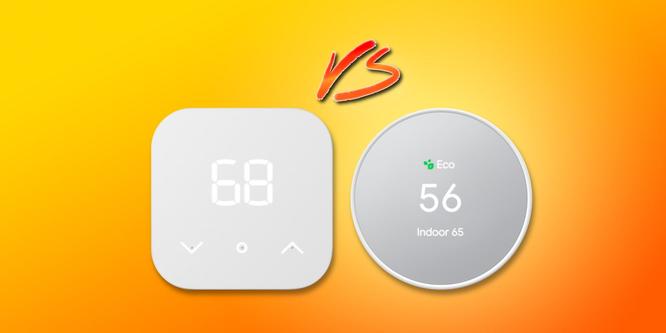 To our eyes, the Nest Learning Thermostat is the more attractive of the two, and has a more premium design thanks to its metal temperature adjustment ring and circular LED display. The Amazon Smart Thermostat is simpler, with a white plastic body that displays the temperature with white LEDs. Instead of a rotating dial, three touch-sensitive buttons are used to adjust the target temperature and access a simple menu system.

Inside, the Amazon device is closely related to the Honeywell Home T9 and T5 smart thermostats, as the retail giant partnered with Honeywell parent Resideo to create one of its own.

The simpler design of the Amazon means it doesn’t display as much information as the Nest Learning Thermostat, so for doing more than changing the temperature and switching between modes, you’ll have to open the Alexa smartphone app. By contrast, the more comprehensive menu system of the Nest lets you dig into settings and schedules by rotating and pressing the adjustment dial.

Lastly, the Amazon thermostat is only available in white, whereas the black Nest is offered with six different colors of metal ring. These are stainless steel, mirror black, brass, polished steel, white, black, and copper.

At their simplest, both can act like normal thermostats, offering manual control of the heating and cooling of your home. But the key here is how they both use artificial intelligence to automatically adjust the temperature in a bid to lower your energy bills while keeping you comfortable.

Amazon and Nest both attempt to guess when the home is and isn’t occupied, using the location of your smartphone and the sensors of other smart home devices. For example, the Amazon thermostat is claimed to work more accurately if there are several Echo smart speakers and displays in your home. In that case, the Alexa Hunches system lowers the temperature when it thinks the house is empty.

The Amazon Smart Thermostat can be controlled manually by setting a schedule for it to follow, by using the Alexa smartphone app, or by speaking to the voice assistant. The thermostat doesn’t have a microphone or speaker of its own, but you can ask the Alexa of any nearby Echo speaker to adjust the temperature for you. Because the thermostat connects to your Wi-Fi network, it can be monitored and controlled while away from home too.

Similarly, the Nest Learning Thermostat doesn't have integrated voice control, but it can be interacted with by speaking to Google Assistant. Additionally, the Nest device also works with Alexa and other systems like IFTTT, Apple HomeKit and Samsung SmartThings. This cross-platform compatibility gives the Nest the upper hand, especially if you live in a home that isn’t run exclusively by Alexa.

The Amazon thermostat has built-in temperature and humidity sensors, and can access the temperature sensors fitted to some Echo smart speakers. But Amazon doesn’t sell dedicated sensors for relaying the temperature from other rooms, as Nest does.

The Amazon Smart Thermostat has a surprisingly long feature set for such a low price. It is $190 cheaper than the Nest Learning Thermostat, yet joins it as being one of very few that are truly smart, using artificial intelligence and the sensors of other devices, plus the Alexa Hunches system, to automatically and efficiently heat and cool your home.

Both tap into smart home systems for voice control and remote app support, but the Amazon thermostat loses marks for only working with the company’s own Alexa platform. Those who have a varied smart home ecosystem will want to look elsewhere.

But, if you are happy to live inside Alexa’s walled garden, the price of the Amazon Smart Thermostat should be enough on its own to justify it over the Nest Learning Thermostat. If price isn’t a consideration, however, and you’d rather have the more stylish thermostat (or are fully subscribed to a Nest system and want to keep it that way) then the Leaning Thermostat is still the one for you.