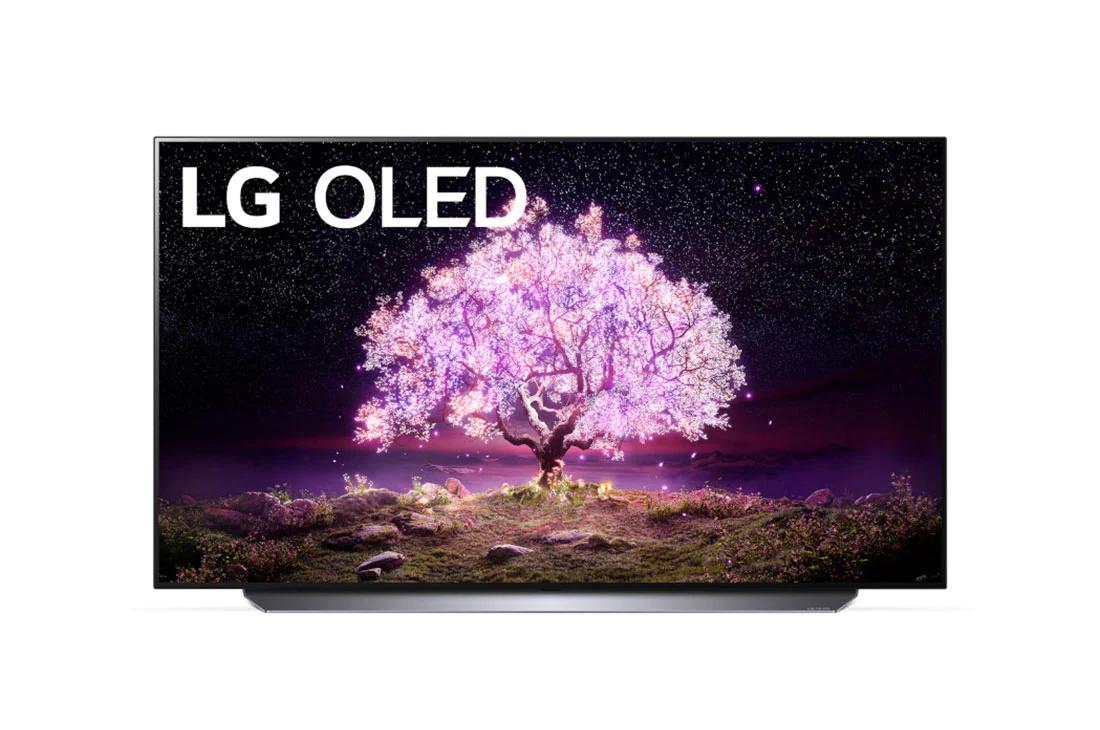 There are few sets that scream ‘gaming TV’ quite like the LG OLED48C1, but don’t let that put you off if all you’re after is a modest-sized screen with top-notch picture quality. That’s very much LG’s MO too.

LG has been one of a happy few leading the way with OLED technology for many years now and, even before 2021, the company has had its C-series sets in a really good place, offering some very credible dark detail to accompany those typically deep OLED blacks. And don’t get us started on the rich, vibrant colours – at least not yet.

The packaging suggests that you need two people to build and position the LG OLED48C1. That’s certainly good advice considering this is no cheap purchase, but such are the dimensions and weight of this dinky 48-inch set that you can quite easily get your arms around it and shift it on your own, and without much danger of pulling anything difficult to recover from either.

The edge-to-edge glass panel has only a small bezel of black bordering the picture. So, with no excessive frame bulking up the build, you might well find that it takes up little more space than an old 42-inch flat screen TV. All the same, best get the measuring tape and make sure.

As ever, the actual OLED panel is millimetres thin but there’s plenty of extra depth to house the electronics and speakers down towards LG’s central plinth-style stand, which has held its top end TVs in position for many years now. It’s certainly a smart design and one that hasn’t really changed much in the last few generations of LG OLEDs.

What has changed for 2021 is the LG Magic Remote, which has now been squared off and made to look a little more traditional than the really curvy ones of the past. You can still use gestures to move its little cursor around the screen. It’s still voice-enabled and we’re still not entirely in love with the way that the scroll wheel doubles as a slightly unstable select button, but let’s not pick nits here. It’s a very good, ergonomic and highly functional remote control, and that’s all it needs to be.

As for the sockets and connectivity, you really couldn’t want for anything more, and LG likes to keep it that way. All four HDMI sockets are 2.1-enabled, there are three USBs, headphones, optical-out and there’s Bluetooth for wireless audio. It’s Freesat compatible too.

One of the great reasons to buy an LG TV is that it comes with almost every feature available. In fact, pretty much the only compromise you have to make is that it doesn’t support Samsung’s HDR10+ standard. But, what with Dolby Vision still being the market leader in the dynamic HDR space, we don’t see that as much of a problem. There’s also Dolby Vision IQ, which you enable by turning on LG’s AI Brightness Setting while watching Dolby Vision content. This adjusts your screen’s output according to the ambient light in the room.

That’s all controlled by the brains of the TV, the latest incarnation of LG's Alpha 9 processor, the quad-core Alpha 9 Gen 4. With this new birth comes a few picture and sound upgrades. Object Enhancement is now sophisticated enough to recognise whole bodies as well as faces, animals, cars and other things. Sound can now be upmixed to an Atmos-virtualised 5.1.2.

There’s also a couple of brand new systems to enjoy such as Scene Detection, which will optimise the picture on-the-fly according to what kind of scene it thinks is being presented, and Auto Volume levelling, which will ensure that the sound levels are consistent between sources. That means no more having your ears blown off when you switch back to live TV from Netflix.

It’s the gaming features that will doubtless be the biggest draw for many, though. All four of the HDMI 2.1 ports are rated at 40Gbps and are capable of 4K@120Hz, VRR (in all current formats) and ALLM. Input lag, meanwhile, is less than 13ms. eARC is supported, too. 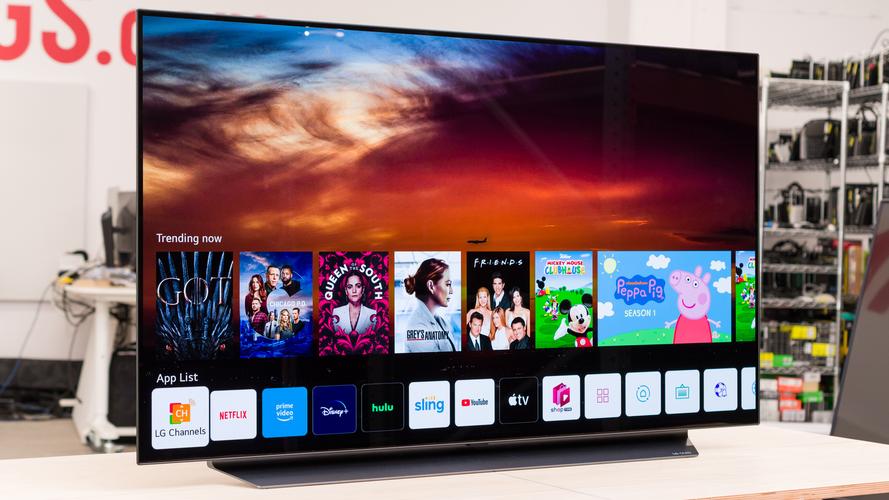 Last but not least is LG’s updated TV operating system for 2021 – webOS 6.0. It’s stacked with apps and services (BT Sports, Apple Music and Tunein are the only significant absentees), handles mirroring over AirPlay 2 and is generally pretty easy and pleasant to use.

The home page is a little busier than we’d like and a little too focused on what’s trending and what’s live rather than what we actually want to watch, but it certainly does the job better and more intuitively than most.

LG should be praised for its well calibrated picture presets for 2021. The Standard and Cinema modes offer genuine out-of-the-box options for two different but equally valid tastes, with the former on the contrasty side and the latter very natural and believable, even if the motion processing needs pulling back.

Cinema Home is the one to go for, though, for the very best that this TV can offer. Fine tune with the sharpness slider and adjust the colour temp to the look you like and you’ve got it all within a matter of minutes.

Watching Guardians Of The Galaxy 2 on 4K Blu-ray, we’re delighted with how well LG’s OLED processing reveals dark detail in the fireside scene on Berhert. The flickering side lighting from the campfire is handled well enough to be delivered with a good tonal variation across the faces of Ego and the Guardians. Details in the shadows are still clear too. We can pick up the textures of Gamora’s black leather clothing and the bark on the trees around her as she takes Peter Quill aside for a talk, and all without wrecking black depth.

It’s equally impressive as we head inside Ego’s craft. The sculpted white curves of the egg-shaped vessel’s interior look wonderfully three-dimensional so long as you don’t get drunk on the punch power that’s available with the contrast enhancer. With Peak Brightness on High and the HDR Tone Mapping filter at work, the picture finds an excellent balance between dynamism and subtlety.

Quill’s oxblood coat looks striking and glossy without us losing the finer touches of the scene such as the faint freckles on Mantis’s skin or the strands of hair in a series of grey shades. And, as promised, the colours are stunning, from the yolk coloured walls to the kaleidoscope of hues on Ego’s planet.

For motion, Cinematic Movement is the best choice of preset. Watching the intro to Jack Reacher on Blu-ray, there’s still a touch of judder as the camera sweeps over Pittsburgh but the action is largely smooth and devoid of any soap opera feeling or processing artefacts as the shooter’s car drives under bridges and cables on the way to his car park killing spree.

The Alpha 9 Gen 4 does a decent job of upscaling a film that can come across as quite noisy. The filters take care of the worst of that while leaving some impressive skin details in the close-ups. Tom Cruise’s battle-hardened Reacher is complete with pits and scars and everything you’d expect.

Blacks stay nice and deep, of course, and the colours hold well, looking at the overhead shot of the crime scene. The foliage is believable and there’s a nice indigo tinge to the paving slabs of the riverside walk.

Interestingly, it’s the preset called ‘Eco’ that gives the fastest access to the right SDR picture. That’s because the viewing is best without too many of the brightness boosters that would otherwise blow out all of the detail. Add in just a small level of the contrast enhancer, modulate just a touch with the contrast slider and you’ll pretty much have it all.

The results are well worth it too. Take a look at the two-shot of Cruise and Rosamund Pike in profile in the cafe scene and the whites look terrific. Pike’s pale skin and hair, her lilac shirt, and the white crockery on the table are all well produced bright shades with the correct feel of each material from gloss to matte, porcelain to fabric.

Taking a quick look at BBC News 24, we’re happy to report that this LG’s performance at SD is typical of any 4K set asked to upscale such a huge amount. The colours don’t jar and faces look fine in close-up, though they're understandably soft and detail-light. There’s a touch of ghosting on the edge of the time and ticker at the bottom of the screen and objects look a bit rough from distance, but that’s SD viewing for you.

The audio performance of LG’s C-series has come on leaps and bounds over the last few years. Gone is the muddy fudge of rear-firing speakers in favour of a 2.2ch 40W set-up on the bottom edge of the TV. It’s a similar arrangement to the CX-range from 2020 but a different presentation. Clarity seems to be the watchword for this year and that feels like the right decision, even if that means sacrificing a sense of impact here and there.

Back to Guardians Of The Galaxy 2, there’s a sense of detail that just wasn’t there a few LG OLED generations ago. The dialogue in the argument between Peter and Gamora on Ego’s planet is delivered in a clean, clipped fashion and the sound made when the two ears of 'space corn' rub together afterwards is every bit as rasping and irritating as it should be.

When Nebula flies in to attack her sister, the LG’s 5.1.2 virtualiser does a very impressive job of adding an excellent feel of spread to the sound. The bullets seem to hail down in the right places and the craft wooshes by well beyond the confines of the TV frame itself.

While there’s enough dynamism to feel some of those blasts hit the ground at Gamora’s scampering feet, the sense of excitement could definitely be bettered. It’s generally fine but there's the odd moment when an effect seems lost in the soundtrack altogether. A few hits of Nebula’s crash landing in the cave don’t seem to match the onscreen action for power.

It’s possible to get a more consistently impactful feel if you switch off the Dolby Atmos processing, and some more volume too, but the bass isn’t handled brilliantly and tends to muddy those clear waters that LG has worked hard to make pond weed-free this year.

The best solution is, of course, to buy a soundbar or dedicated home cinema system. But you knew that, right?

The LG OLED48C1 is a terrific all-round TV and one that’s easy to recommend to anybody. The Philips 48OLED806 might be better for pure cinematic performance but this LG is more usable and significantly easier to get the best out of.

Even if you’re not that interested in all the next-gen gaming features, the fact that LG is so keen and quick to add them when available bodes well for any new app, service or feature and for more general film and TV viewing. LG has a track record of keeping its TV up to date while many of its rivals do not.

Read our review of the Sony KD-48A9

Check out the Sony Bravia XR-55A80J

See our pick of the best TVs from budget to premium

Read our round up of the best TVs for gaming