Portable projectors aren’t exactly new. There’s been a plethora of them over the years, to varying degrees of mediocrity. Samsung’s hoping to change that at CES 2022 with the Freestyle, a portable projector that doesn’t necessarily aim to be at the center of your living room and home theater experience, but rather in the middle of the good times that go on outside of it.

The $899 Freestyle looks like an upward-firing floor light. And if it’s pointed toward the ceiling, or wall, that’s a pretty apt description, as it’s capable of a 1080p projection ranging from 30 inches to 100 inches, all powered by Samsung’s Tizen-based smart TV experience. It’s lightweight at 1.83 pounds, which means it almost certainly feels as portable as it looks. So you can hop from one kid’s bedroom to another, or pull sleeping bags into the living room and fire up a movie on the ceiling. (Which is the sort of thing you do if you have this sort of product and kids.)

“The Freestyle is a one-of-a-kind projector geared toward ultimate versatility and flexibility to meet the consumers’ changing lifestyles,” Simon Sung, executive vice president and head of the sales and marketing team for the visual display business at Samsung Electronics, said in a press release. “Without the limitation in space and form factor, The Freestyle is a fun and versatile device that can be used in any way consumers prefer.” 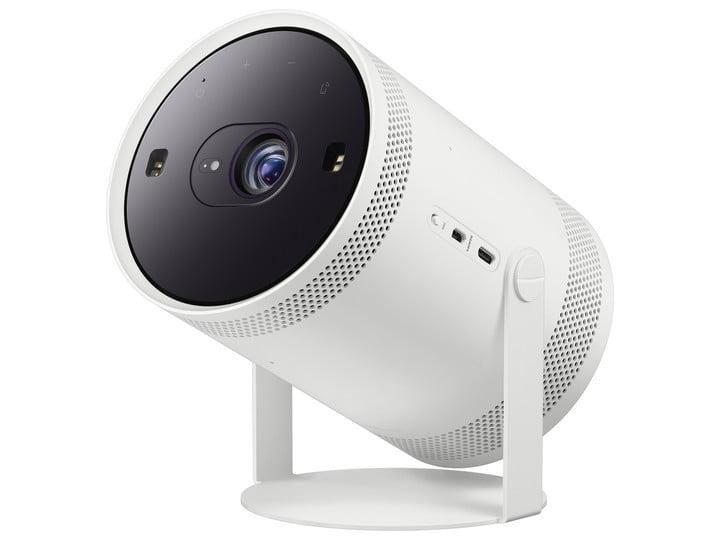 Watch Samsung’s promo video for the Freestyle and you get a better sense of what Sung means means. The Freestyle isn’t meant to be kept in just a single spot. If that’s not evident enough by the fact that it’s powered by a removable USB-C, the promo video shows energetic young people running around and having all kinds of fun with a Freestyle. While that may be unthinkable to those of a certain age, it’s also the sort of thing that’s catnip to creators. Showing video on your friend’s sweater? Sold. Projecting a tiger on the wall? Totally.

And then there’s the matter of accessories. A lens cap turns the Freestyle into a colored, constant source of ambient light. An optional waterproof case and portable battery keep things protected and powered while you’re away from home and creating content. Or watching videos, for that matter. Samsung says the Freestyle also is compatible with USB-PD and 50-watt/20-volt output or above.

That’s the normal stuff, though. There’s also an adapter that allows you to connect the Freestyle to an E26 light socket.

On the audio front, Samsung is promising 360-degree sound — and it’ll sync up with the aforementioned mood lighting somehow. (Samsung didn’t say what music apps might be supported.) And you can control things with your voice — don’t worry, there’s a physical microphone switch if that just isn’t your thing — or use Google Assistant, Amazon Alexa, or Samsung’s Bixby assistants.

The Freestyle will be available for pre-order in the United States starting on January 4 and will hit other markets worldwide in the coming months.