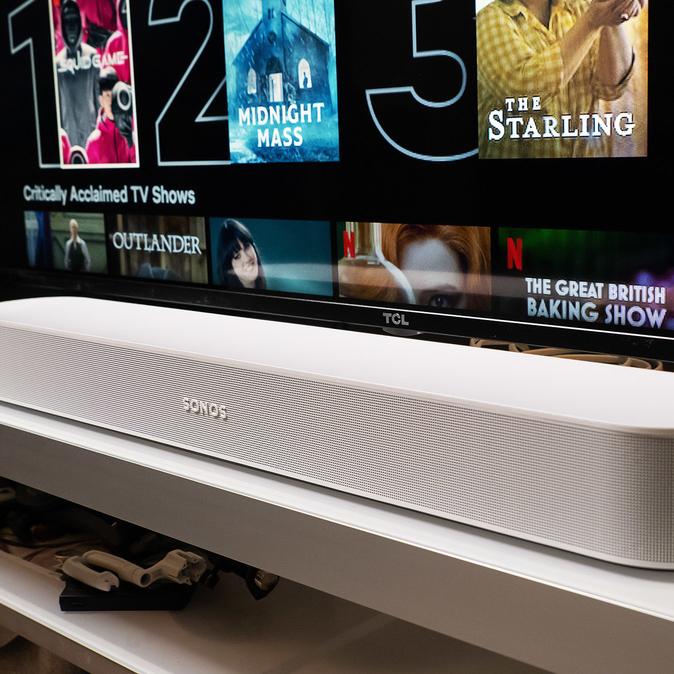 From the moment Sonos announced the second-generation Beam soundbar, it was evident that this sequel is more refresh than reinvention. The new Beam, available October 5th and now slightly more expensive at $449, is the same compact size as the 2018 original. The speaker drivers inside the unit are completely unchanged. Sonos has touched up the appearance by switching from a fabric covering on the first Beam to the company’s signature perforated plastic with finely drilled holes running along the entire front of the soundbar. And because it’s equipped with more processing power and eARC, the new model supports immersive Dolby Atmos audio.

But the target customer for the Beam hasn’t changed one bit: this is a soundbar for people who want to upgrade their TV’s lousy built-in audio — with the enticing side benefit of native integration with Sonos’ multiroom audio system. At its price, the Beam is more expensive than entry-level soundbars from Vizio and the like. And if you’re willing to spend double, you can get much larger, beefier Atmos soundbars like Sonos’ own Arc or alternatives from Sony and Bose. The Beam is dwarfed in size by the Arc, and its sound performance doesn’t approach the same level. But I can still see and understand the appeal of choosing this one instead.

Maybe you’re in an apartment where more powerful speakers would agitate the neighbors. Maybe you don’t care about or feel the need to invest in premium-tier home theater audio: you just want to make your movies and TV shows sound noticeably better, and the Beam’s smart speaker functions and wide support for music streaming are just icing on the cake. If that’s what you’re after, the second-gen Beam does the job equally as well as the first. Slightly better, even.

Just don’t get your hopes up about the whole Dolby Atmos surround sound part. When reviewing the original Beam, Nilay said the key was to not overthink it. But by making Atmos a pillar of the second-gen model, Sonos is leaving room for people to do just that and come in with unrealistic expectations. As I’ll get into later, for all the work Sonos has put into virtualization and tuning to try to replicate Atmos’ enveloping height channels, it turns out there’s really no substitute for speakers that are pointed, well, up.

Aside from the sleeker perforated front side, everything else about the Beam’s external appearance is identical to the original. You’ve got the same capacitive touch playback controls on top — including a button to mute the built-in voice assistant mics — and the same ports on back: there’s HDMI, an ethernet jack, a connect button, and the power input. What’s new about the second-gen Beam is that Sonos has upgraded the HDMI port to support eARC, which enables Atmos and comes with other perks that often go unadvertised. For example, if you’ve got a TV with HDMI 2.1, you shouldn’t encounter any audio and video sync issues (even when gaming), which could be frustratingly common on the first Beam. That alone is a reason I’d buy this hardware over the original given the choice — even if you can still find the old Beam for a while.

Setup remains a relatively quick, easy process using the Sonos app for Android or iOS. I plugged the Beam into my LG CX OLED TV, opened the app, the new device was automatically recognized, and then I held my phone near the soundbar to finish linking it to my system via NFC. iPhone owners still get exclusive access to Sonos’ Trueplay feature, which uses the phone’s mic to optimize the soundbar’s audio output to sound best for any room in which it’s being used. Considering the Beam has its own mic array, why not just build automatic Trueplay into the thing? Android users can still take manual control of sliders for bass, treble, and loudness.

The Beam’s 40-percent faster processor allowed Sonos to add more “arrays” — the software that coordinates the playback and sophisticated phase algorithms between all the soundbar’s speakers — and the new ones are fully dedicated to surround sound and height effects. But remember, the acoustic architecture inside hasn’t changed from the first Beam. There’s a center tweeter, four midwoofers, and three passive radiators that Sonos says help to enhance lower frequencies. However, physics are physics, and we’re talking about a soundbar that’s barely over two feet wide; in other words, you’re going to want a Sub if you need growling, powerful bass. The Beam won’t get you there on its own, but neither does the Arc or most any standalone soundbar for that matter.

But the Beam is still a strong performer that tends to genuinely surprise people for its size, and this one fares even better. It can fill most smaller to midsized living rooms (or bedrooms) without straining itself. And the amount of presence and great stereo separation of the first model has carried over to the new device. The general surround virtualization effect is quite good: you can get lost in movies without it being obvious that all the sound is originating from the soundbar beneath the TV.

Watch a car chase or some fighter jet sequences, and you’ll hear that the Beam does an impressive job having audio “swoop” in from the left and right sides of a room — assuming your walls aren’t terribly far apart. The feeling of spaciousness is very real, and in A/B testing with the original Beam, this is where those new arrays are making the biggest difference. I’ve seen Sonos describe it as panoramic sound, and that seems right on.

The company has also made some tweaks that result in even clearer dialogue in regular listening, and the “speech enhancement” mode is still there if you need even more emphasis on what’s being said. 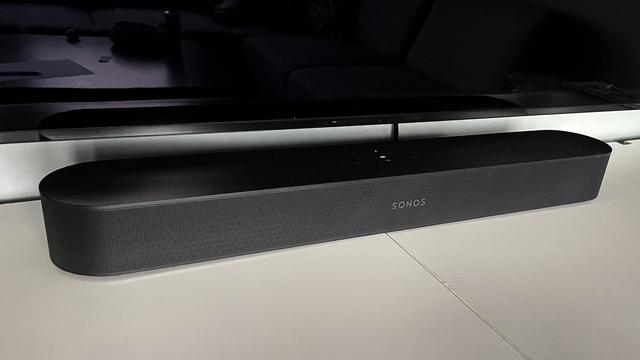 But as for the Atmos part? Meh. My bedroom has fairly low ceilings, but even when sampling go-to Atmos action scenes in movies, I can’t say I often picked up on any standout height effects. Don’t buy the Sonos Beam in hopes that it’ll legitimately sound as though audio is coming from above. It just doesn’t get there. You can bounce carefully phased sound waves off walls all you want, but it won’t hold a candle to a proper Atmos system with in-ceiling speakers. Even some owners of premium soundbars like the Arc that do have up-firing speakers don’t consider the Atmos aspect to be a game-changer. If your room conditions are ideal, you might get some hints of verticality, but there’s no real illusion of 3D.

Even if it’s low on Atmos magic, the Beam can be the start of a really great surround system if you tack on a Sub and other Sonos speakers as rear surrounds. (Opting for the Ikea Symfonisk bookshelf speakers is a popular way to save on the latter.) You’re looking at well over $1,000 to build a proper 5.1 setup, but if you see yourself staying in the Sonos ecosystem for a long time to come, it’s worth considering. Adding in extra speakers can quickly make you forget about the Beam’s size constraints. And you can always upgrade to an Arc down the line and keep everything else in place.

Every smart device now requires you to agree to a series of terms and conditions before you can use it — contracts that no one actually reads. It’s impossible for us to read and analyze every single one of these agreements. But we started counting exactly how many times you have to hit “agree” to use devices when we review them since these are agreements most people don’t read and definitely can’t negotiate.

To use the second-generation Sonos Beam, you must agree to the company’s privacy policy. The company also collects what it refers to as “additional usage data,” and this covers a lot, including:

You can opt out of additional usage collection, but Sonos warns that doing so will disable functionality like personalization services (e.g. Recently Played), Sonos Radio, voice control, and more.

Final tally: one mandatory agreement and one optional. Using voice commands with Amazon Alexa or Google Assistant will subject you to the privacy policies and terms of service of those companies.

Everything else about the Beam can already be found on the first model. It’s still totally competent as a music speaker (and the improved virtualization helps here too), though not as well-matched for that as something like the Sonos Five. You can choose to use either Google Assistant or Amazon Alexa as your preferred voice assistant — but not both at once, even if it’s technically possible. (You can also just skip setting up a voice assistant if you’d rather avoid them). The soundbar supports Apple’s AirPlay 2, so you can play music, podcasts, or other audio to it from an iPhone, iPad, or Mac. And you can also send TV audio across your other Sonos speakers if you’re so inclined.

At the center of everything is Sonos’ compatibility with pretty much every streaming audio service under the sun. The company has said it’ll add support for high-resolution audio and Dolby Atmos tracks from Amazon Music later this year, and hopefully the same will pan out for Apple Music. Sonos is also granting a longtime customer request with the introduction of DTS decoding, another feature coming to all of its soundbars in the coming months.

Sonos’ addition of Dolby Atmos to the second-generation Beam doesn’t magically turn it into some mind-blowing $450 soundbar. But it’s still a very good one made better by the new virtualization upgrades and its seamless integration with your other Sonos gear. That, combined with the company’s impressive commitment to software support, are still the biggest reasons to spend the extra cash on this instead of buying a perfectly good Vizio bar for less. The upgrade to eARC makes for a smoother, more dependable listening experience without any latency issues, and the new design will look better in your living room. But a lack of proper up-firing speakers limits the Atmos potential, and the fact that Sonos has reused so much of the hardware here makes the second-gen Beam feel like a half-step toward something more ambitious. I expect to see bigger things whenever the third generation comes along.

Photography by Chris Welch / The Verge