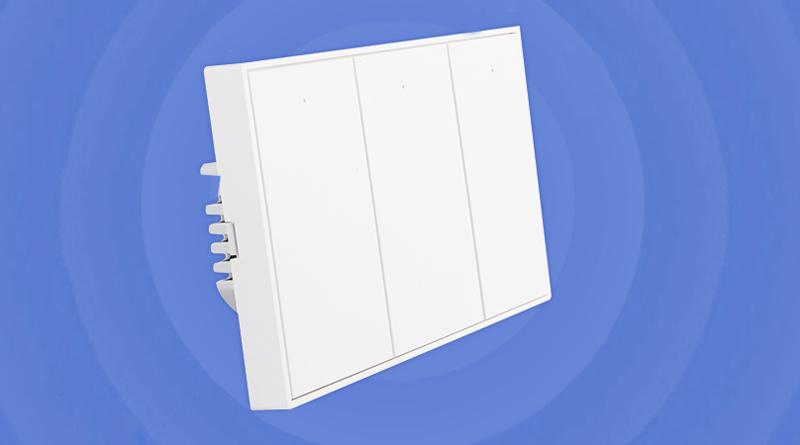 You may have seen the recent news that Chinese tech company ZemiSmart introduced a new Zigbee hub with official HomeKit compatibility. This hub exposes many of ZemiSmart’s own Zigbee-based devices to HomeKit, and, the company claim, also exposes certain other brand devices that are Tuya certified, which is a bit of a first in the Zigbee world, if you discount the Friends of Hue products. We reviewed the hub a few weeks back, and in our video review, we also briefly looked at some smart switches the company provided, so today’s review gives these a slightly closer look.

You can also watch the same video already mentioned, but starting with a look at the switches;

ZemiSmart, for better or worse, seems to focus on low prices over presentation and to be fair, this was also the case with Aqara a couple of years back. With that in mind, the box for the switches, whilst adequate, is largely uninspiring, if it were trying to catch your eye on a shelf. It does the job though, and although there’s very little information on the box, it does show the product in the form of a line drawing. Note that the same box is used for the single, double, and triple switch variants, so don’t panic if you bought a double switch, when you see a single switch on the front!

Aside from the basic box and image, it has the logos for Amazon Alexa and Google Home, although no HomeKit logo, probably due to these being made before the HomeKit hub that these work with, to being ready at the time. They are indeed HomeKit compatible though.

ZemiSmart sent one each of these switches, all of which don’t require a neutral, and don’t come with an earth/ground terminal either. The size and design are the same throughout, with the front being split into 1, 2 or 3 segments, depending on the one you have. Each switch has its own LED that will show in blue, although this can be adjusted, which I’ll mention in the next section. 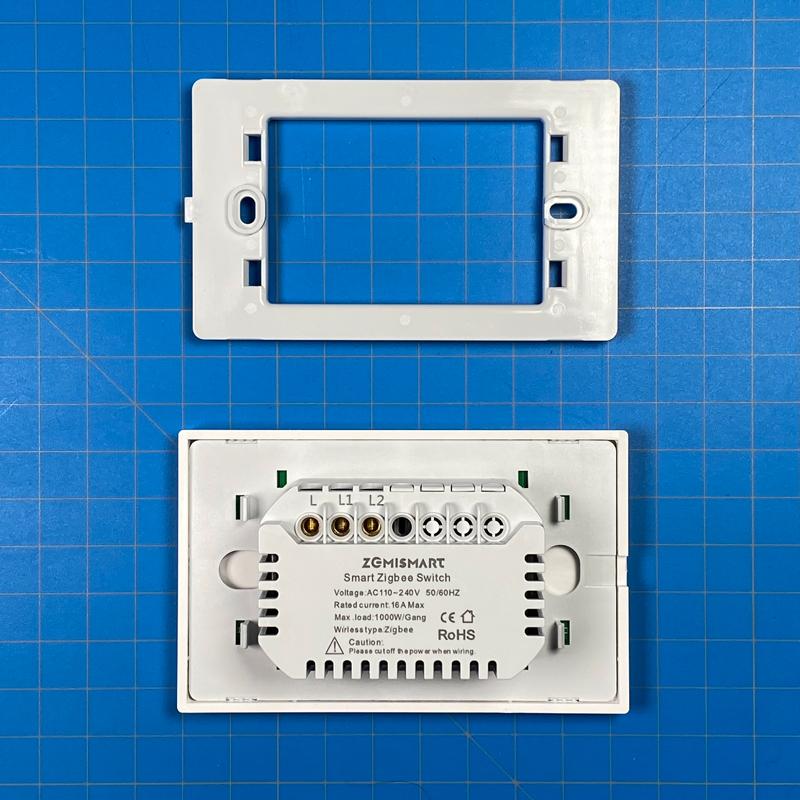 As you can see, unlike many switches designed for North American switch boxes, the ZemiSmart ones use up the whole space for the buttons. This means you can’t really have a couple of these side by side in a double gang box, for example, unlike say, the Aqara US switches. The rear of the switches are fairly standard, and as the basic internals are much the same for all three variants, the back section where the wire terminals connect to are all the same, so in the image above, with a two switch variant, you can see that some of the terminals are blocked off, as they’re not needed.

The back section of the switch that sits in the switch box isn’t especially deep and is slightly less deep than Aqara’s offerings. As with many other switches, there are screws above the terminals to secure the wires once they’re in. I do prefer this design over ones that have wires already fixed, as they don’t require those large screw-on wire connectors to bind the wires from the wall and the switch together, as they take up the limited space you have. So, the wires from the wall go directly into the switch.

The switches come in two parts, so there’s a separate plate that screws to the outside of the switch box (top), with the switch itself clipping into that plate. It’s all fairly straightforward, although this internal plate has a lip at the top and bottom that I think is designed to help you keep the switch lined up with the wall recess, although if your builder was a bit sloppy with the plastering at the time your boxes were fitted, you may find yourself having to chip away at the plaster a little to make these sit properly.

The dimensions for the front part of the switches are;

The rear part of the switch that sits inside the switch recess uses the standard US dimensions;

As regards the specs for these, as mentioned, they don’t require a neutral wire, although neutral versions are available. They can work with 110-240V AC at 50/60Hz, which is great news for people in the Philippines for example, where US switches and sockets are used, but at 220-240V. The rated current is 15A max, and the maximum load for each gang is 1000W, which I would understand to be 1000W divided between each switch, as all of these switches represent one ‘gang’ regardless of whether it’s a single, double, or triple switch.

THE HUB AND TUYA SMART APP

As these switches use Zigbee 3.0, you’ll need a hub for them to work, regardless of whether you want them in HomeKit or not, but if your aim is for HomeKit, then you’ll need the ZemiSmart Zigbee hub, which we review separately HERE. This hub gets the switches into HomeKit although you also need the Tuya Smart app to do so initially.

If you’re familiar with how to add Aqara devices, the process is not dissimilar, although as the Tuya app is designed to work with many brands, it can sometimes be a bit confusing to find your particular product, and in the case of these switches, I couldn’t see them listed. However, it doesn’t matter, as you simply have to press and hold one of the buttons to get into pairing mode once you’ve got the app open and the hub also into pairing mode. From there, the switch is discovered, and you simply need to set up a few things like the name, the room and home it’s located in, and you’re done.

The Tuya app isn’t great in some ways, but it’s useful enough for set-up and a few settings you won’t find exposed to HomeKit. For example, the LED lights that are on the switches show in blue when the switches are off, so you can see them in the dark, and turn off when you turn the light on. In the settings for the switch in the Tuya app, you can set the opposite behaviour, so the LEDs are off when the lights are off. yu can also turn the LEDs off totally, so they never show.

The Tuya app also offers a section for logs, so you can see when the lights were operated. You can also set schedules as well as countdown timers if you wish. Much of these can be done in HomeKit of course, so aside from the options for the state of the LEDs, you may as well use the Home app.

In HomeKit and the Home app, things are pretty straightforward, so in the case of the double rocker I installed, there’s are two separate tiles to control each switch individually. Each switch has its own toggle when you long press on the tile, and there are separate settings and automations available for each switch.

As you can see in the screenshots above, the hub can be found in the settings for the Home app, showing any devices connected to it, which also reveals that the hub is certified (it would state it’s not certified otherwise). The Switch and a Zigbee light strip I’ll be reviewing in the new year are listed as connected to the hub.

As you might expect, with these being Zigbee devices, reaction times are pretty fast, and so in this respect, there are really no complaints. As for the feel and construction of the switches, they don’t feel especially premium in terms of the materials used, but then they are fairly competitively priced compared to much of the competition. The buttons are a little ‘soft’ when pressing, but nothing out of the ordinary. Add to the useful option to control the LED behaviour to your liking, and it does make these a compelling product. However, for those invested in ecosystems with a Zigbee hub like Aqara, it does of course mean another hub, at least if you’re going down the official route, so it may not appeal so much to users in this ecosystem. Besides that, if you are an Aqara user in the US, then their own switches will fit any decora plate without any issues, which means that if you have a two-gang set of switches, you can have them side by side, which you can’t with the ZemiSmart ones, due to their design. The one positive here against the Aqara option is that you have a triple switch in one gang option, which not many other companies offer in terms of a smart switch, especially with no neutral.

All in all, I’m more impressed with these switches than expected, and for the price, it’s hard to see a downside apart from the aforementioned issues when compared to decora compatible switches. If you don’t mind another hub (assuming you already have one or more) and are excited at what else ZemiSmart may bring to HomeKit, then this seems like an easy commitment for the cost.

Full disclosure: ZemiSmart provided HomeKit News with the ZemiSmart hub and switches for the purpose of this review. No other compensation was made, requested or has not in any way influenced our opinion of this product.